The day didn’t get off to a good start. If you haven’t seen the film ‘RV’ starring Robin Williams, I give it a strong recommendation. In it he has a very messy sewage accident on what is a nightmare holiday experience. Well, our RV’s water and sewage system hasn’t been working for a while. So John drove it over to have the tank of sewage emptied, and the connecting tube which was cracked actually broke away, spewing out our previous week’s refuse, and emitting as you’d expect some fairly choice aromae. That changed our day’s plans, in that he now had to drive all the way to Las Cruces, our end destination 109miles away, to get it fixed; so David, our video man with a brilliant attitude needed to closely shadow us all day instead, to replenish our liquids and food, and take our excess clothes once the initial freezing temperatures had dissipated.

The actual ride began beautifully. On the way up the mountain, I saw a few deer effortlessly bound over 5ft fences with such gracefulness, it was uplifting to watch. There was plenty of snow about. Craig came across some big cat footprints, and we were on the lookout for bears, but none came into view. At one stage I jumped off my bike to throw a snowball at the others. It’s so weird to have snow when the sun is out and gets really hot during the day. Craig won the competition for writing his name most clearly in the snow with his pee, a cross between Times New Roman and Arial (sorry ladies, boys will be boys – of course it wasn’t my idea to have this competition, but I reluctantly took part because of intense peer pressure, although low on ammunition at the time). 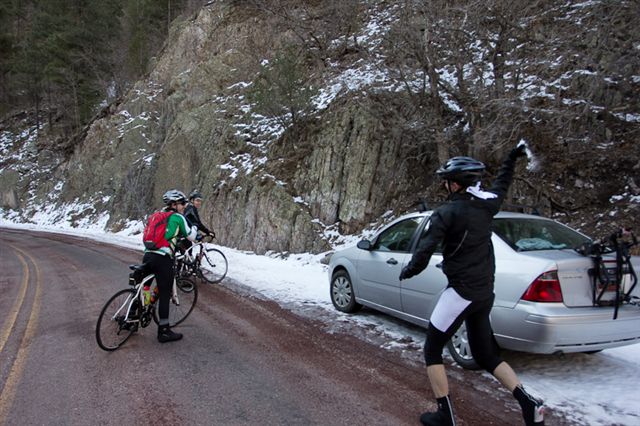 (Simon throwing snowballs at the others)

We had concerns that his cracked rib would make the mountain climb go too slowly, but actually we made good time to the top to Emori Pass, and were greeted with another awe-inspiring view. And then it was a 30mile downhill at top speed, having to watch out for black ice in the mountain shadows.

I didn’t think it was going to be hard post Emori Pass, but actually it was a looooong day. The sun was belting down on us, the wind didn’t go in our favour until towards the end, and because we didn’t have the RV, we didn’t get a decent lunch. Those three factors combined to knock the stuffing out of us. It dragged on and on, and I pushed my knees too hard, which was gutting because I thought they had strengthened sufficiently. The last 40miles in the desert I had shooting pains coming up from them, warning me to stop quickly. But we had to make it to the end. Then a headache kicked in. Jeff was totally shattered too, and Craig looks progressively more like a zombie with his cracked lips, chafing nether regions from forgetting his afternoon dose of chamois cream, and eyes pouring from the melted sun cream coming down from his forehead so he can hardly even see where he’s going. Poor chap, but he’s a brick, rock solid!

We got chased by five different dogs, three alone in the hamlet of Garfield. When I used to think of Garfield, images of a lazy genteel cat came to mind, but now Garfield elicits pictures of snarling canines drooling in anticipation of a kill. There were lots of dead animals along our way – one massive Doberman’s corpse stiff with rigor mortis, two skunks, a snake, a cat.

Anyways, some days are fun, and this wasn’t one of them after the highs of the morning mountain. The thought of that relentless sun bearing down on us day after day is daunting. It is so energy sapping. I never thought I’d prefer to cycle in the rain, but it’d make a nice change now. So we’re booked into a Hampton Inn room at a special discount. A very kind friend of a friend of Dad’s took us all out for an Italian meal just now. I mistakenly ordered two main meals and couldn’t eat much of either as I’d already pigged out on the free bread, but maybe it was a cunning mistake because I’ll be able to have them tomorrow for lunch whilst the others enjoy less sophisticated fare.

So, we managed 109miles in all, and I’m glad to have got that day over with. Headache please go away, may it not be heat exhaustion. May we all sleep well and be ready for another full day. And may this find you doing well wherever you are.