Providence died in 2012, but will be giving birth this coming Monday…

On 13th September 2012, Provi plunged over a cliff at Butomangwa with her three RTNB colleagues (Burundi’s national Radio/TV) after a day’s news-reporting on a UNICEF project. All four were declared dead on the spot. Their bodies were taken to the morgue at Rutana hospital. The accident made national news headlines, and the Minister of Information announced on air each of the names of the dead, including hers.

The first three bodies filled up the morgue, so Provi’s corpse was laid outside on the ground in the sun. In the meantime, a lady called Cecile was praying, and she had a vision in which she saw a woman still alive at the hospital who needed rescuing. She made her way there and, although she’d never met Provi before in her life, she recognised her face immediately from the vision. The trunk of the corpse was so mangled and broken that Cecile struggled to follow through with what she felt God had told her. She summoned the nurse, who confirmed to her that Provi was indeed dead.

Sure enough, on closer re-inspection, there was the faintest glimmer of life. Cecile’s husband Fulgence worked (and still works) for World Vision. They are an influential and respected Pentecostal family and they managed to get permission from the Governor to take the body home. There they had doctors attend to her whilst they prayed in the next room. After a while, she regained consciousness.

After an ambulance ride to the capital, she was seen by a top doctor at the Polyclinique. He examined her, and said: “You’ve had so much internal bleeding, yet your vital organs are somehow still relatively undamaged and functioning. I just can’t believe you’re still alive… are you a Christian? Do you pray?” She was able to share her faith and story with him.

Beautiful! And that was over eight years ago.

Back to the present day, due to the injuries sustained in that accident, she can’t give birth naturally. So instead, it will be by C-section this Monday at 830am (UK time).

It’s just a great story! We’ve supported her husband Deo for many years, whose own story is also pretty wild.

Through GLO, we’ve had the privilege of knowing and supporting many outstanding leaders of high integrity. And because of this, we hear countless mind-boggling testimonies like the above that challenge our (lack of) faith and inspire us to trust in Him who “does marvellous deeds”.

So we share these stories to encourage and inspire you, all the more during these challenging days.

PS If you’re looking at ways to help us, could you share GLO with your friends? Do you want to join in the Choose Life read? Could you consider a regular small donation? Or join us for our inspiring weekly prayer Zooms when we actually hear from the likes of Deo?

PPS If you need a ‘remote’ speaker for your church’s Sunday service, or a youth group – whatever context, I’d love to join you to stir the troops and bring a word of encouragement. Do get in touch!

And he did graduate with distinction! And he found a lovely woman to marry! And he’s now a Dad!

* I just came across this and realised we hadn’t posted it, having filmed it a couple of years ago. Still worth seeing! He’s still trying to set up a pharmacy, but maintaining his integrity in the process is challenging, so do pray for wisdom and breakthroughs there.

Another story of the impossible in Burundi – from street kid to being a national sporting hero and using his gifts to promote reconciliation and forgiveness, this is a beautiful testimony of hope…

This is some of my friend Yve’s story. He’s moved on to a new place of work now, but his faith still challenges me… I love sharing

At the height of the crisis in the 1990s, when he was a student at university, someone threw a grenade into Leonidas’ dormitory. Nobody was killed on that occasion, but amongst his many shrapnel wounds, the piece that lodged in his eye has caused ongoing issues ever since. Yet he is not one to seek revenge or harbour feelings of resentment or bitterness.

Leonidas is one of our turbo-charged evangelists, preaching forgiveness and reconciliation around the country through Scripture Union. He’s been greatly used, and continues serving faithfully through many constant challenges.

I love highlighting stories of hope when so often all you hear is the bad stuff. Keep it up Leonidas and SU!

From being in a coma after a militia attack, to being falsely imprisoned, then healed, widowed, and more, Deo’s story is filled with God’s faithfulness amidst many trials… 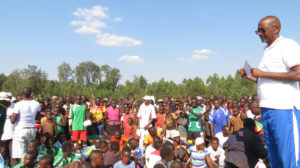 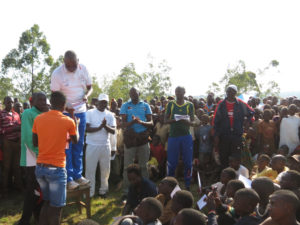 A number of you have written in asking for an update on our appeal for a new vehicle. So this is reporting back to you that all the money came in – hurray – and we’ve ordered a spanking new Toyota Hilux, so can now put Martha out to pasture in the next few weeks. She served us well, but there’s little room for sentiment here, we need to move on! 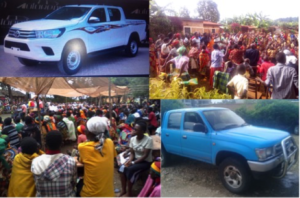 What will we call the new one? Suggested names included Betsy, Audrey, Ole’ Marge, Daisy, Gertrude, Fred, Hank, and more, but the winning suggestion was…

Only joking! Sorry Phil, I think we’ll stick with Audrey, which means ‘Strength’! May Audrey serve us for the next two decades or so without any accident and be used to minister to hundreds of thousands of people throughout the land, Amen?!

Thanks again, we couldn’t do it without you.

Whilst I’m at it, below is a quick testimony from Freddy as part of our More Than Conquerors series, do have a look and be inspired by his story. From never wearing shoes or underwear before the age of 14, walking 3 hours a day to and from primary school, to becoming a pioneering educator and leader in Burundi, building four schools which are all the best in their provinces, three orphanages, and a whole lot more:

When I see streetkids messing around or begging from people on our road or downtown, I fear that one day, they’ll end up being rapists, thieves, murderers, coopted as child-soldiers, or some such horrific scenario. And many do. Their futures seem bleak, almost hopeless.

But then I see the lives being transformed at New Generation. And because we’ve been involved a long time, some of those little kids have now grown up and have bucked the trend beautifully to make a difference in their nation, becoming part of the solution rather than the problem.

He was about to run in the 1993 World Championships 800m final in Toronto, when he received a phone call informing him that his parents had been murdered and their bodies dumped down a latrine…

Here is Nkaza sharing some of his truly remarkable story. He’s a national hero because of his sporting achievements, and he’s using his fame now to rally the youth across the nation to march to the beat of a different drum.