I I took a sleeping pill last night so actually got a reasonable night’s rest. We rendezvoused at 530am from four different locations and set off for the start of the ride. 8-year-old Grant, my little host for the weekend, had left me an envelope on the table with some kinds words, a lovely picture, and $2.25 for cause, so that was touching. It was freezing cold to begin with as we were high up in the mountains, and before long we had left Arizona and entered New Mexico. The roads in NM were not terrible by any stretch, but definitely worse, and so Craig ended up having four punctures, and Jeff one, which knocked about an hour off our day. 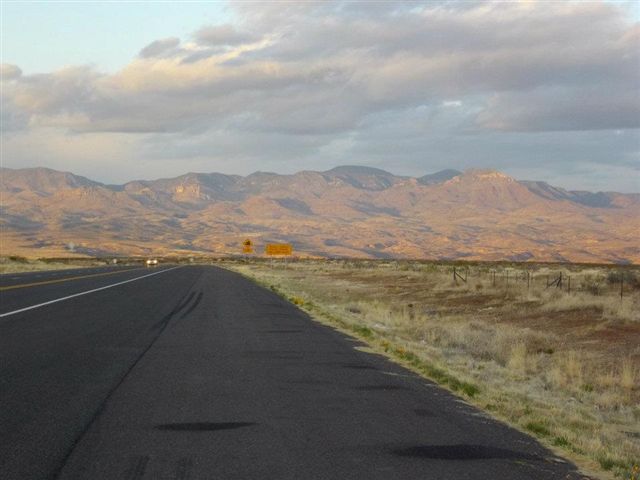 After one puncture, we’d barely gone a hundred yards when my bike slid in the gravel, and I came off it. I was fine, but Craig was right behind me and bumped into me, and then with feet still stuck in cleats, he fell sideways with his bike down the embankment. It seemed minor enough, and it always looks comical when someone falls sideways to the floor helplessly still clicked in by their feet, but actually it was quite serious because he further damaged his cracked rib. He found the whole day therefore more challenging, what with a bad gut and sore eyes as well, and his inability to eat enough food again meant that he bonked before the end of the day, totally running out of energy. To his credit he ground out the last 14miles, and we ended up with 96miles on the clock, which is more than we set out to do because of the climbs.

I found it quite an easy day, and would have liked to get more miles done, but I guess the other two have felt that a few times with me on previous days due to my weak knees, and exhibited great patience, so that’s what teamwork is all about. My backside is a whole lot better. Yesterday Ken gave me his gel seat to put on top of my razor blade one, and that helped. There was still some chafing going on because most of the bits of clothing I’m wearing are old hand-me-downs, so we stopped off and bought some stuff at a bike shop in Silver City, bumping into the same English family threesome from a few days ago.

The one funny of the day was as we crested a hill and came across a completely new type of parched terrain, and Craig said: “If it was green, it would be really lush round here” to which Jeff, who is colour blind, agreed, “yes, it’s so green and lush here!”

Off to bed. We’re in an RV park with a shower a few hundred yards away so I’d better bless my fellow travelers here by going and improving on my current fragrance. Tomorrow morning will be the biggest climb left on our whole trip, which should be fun. Goodnight.