In two weeks’ time, we’ll be back in the UK, and our time as a whole family living together in Burundi will be over.

I find that hard to take in.

In fact, none of us actually wants to leave. We love this country, and we love living here. So it’s good to be leaving wanting more, rather than counting down the days wanting to scarper as soon as possible! 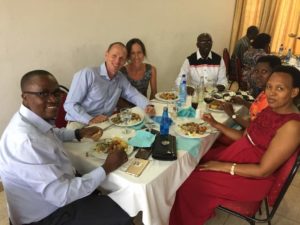 On Friday night, we had a leaving celebration with our favourite Burundian folks. Over 19 years there are a lot of deep relationships. We invited 70 key people together to eat, reminisce, and share with why the time has come for us to move on (already written about elsewhere, but put most concisely, for the kids’ education).

…people I’d shared a skanky bed or floorspace with, people I’d crashed a car and dangled over a ravine with, people I’d been sick with;
colleagues we’d survived on ambush roads together where others died, soulmates with whom we’d preached in the bush where we’d seen literally thousands come to Christ, team-mates with whom we’d broken down in the middle of rebel territory miles from anywhere and been totally stuffed! 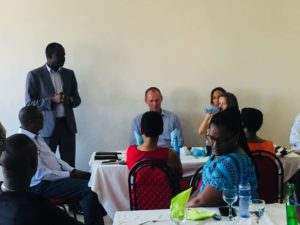 There was so much potential in that room – both realised, and also not yet realised. I looked across at fellow-dreamers and visionaries – in several instances, we’d looked years ago at a simple hill with eyes of faith, and now those virgin hills had been transformed into a thriving school, medical clinic and/or orphanage; or the field we prayed in by faith that was now a beautiful conference centre giving jobs to many and modelling excellence in Jesus’ name; or that land in faith that is now being prepared for a hospital.

And there were still so many dreams in that room that we are committed to see come into being.

The above examples are physical facts that nobody can deny and whose fruitfulness is easier to measure. Yet I get even more excited by the less tangible but more important – the leaders we’ve helped equip, empower and release, such that tens of thousands of people throughout Burundi are not what they would have been without our work; the people who are still alive because of our intervention, the marriages we’ve helped support and strengthen, the children whom we’ve helped get a better education.

I’m not writing this for our glory, but for God’s. We’ve just joined Him and sought to hear, follow and obey. Looking back to when I first arrived 19 years ago, I had about $300 in the world. I borrowed a bicycle from a friend because I was so skint, and for a while was the only Muzungu in the country cycling to work each day, pouring sweat. I had big dreams, but you have to start small, just as you are, with the little you have. Then money came in for a motorbike, and soulmate Freddy and I blasted around the country on some of the most dangerous roads in the world bringing life and hope to many. And so God in His faithfulness launched us out into this great adventure. Crazy days! 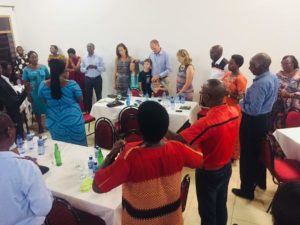 One brother, Emmanuel, testified to the fact he’d lost his first five children (from late miscarriages to a stillbirth to a baby dying a few days out of the womb) – some of you will remember, and you prayed for him – and how in the end we flew his wife to Kenya for better treatment; and she might even have died with the sixth delivery because the umbilical cord was around the baby’s neck and it got messy, but now here she was, and they have four beautiful healthy children after so many years of grieving. Beautiful! 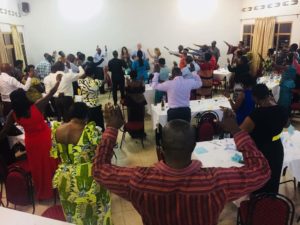 I restated what we were about, what our DNA as GLO was and still is: that EVERYTHING is about relationships. Together we can do more than each of us on our own. Jesus is at the heart of all we do, and we do it all out of gratitude and by His grace. My voice cracked as I shared, and indeed I cut short my slightly incoherent speech to stop myself losing it.

Onesphore, to whom I am handing on the work of GLO in Burundi, organised and led the evening beautifully. He gave everyone a rousing challenge at the end to continue the work, to step things up, to embrace more risks, to count the cost. It’s truly the best scenario I could possibly have envisaged to be able to hand on the baton to a Burundian of such integrity, gifting, vision and passion. 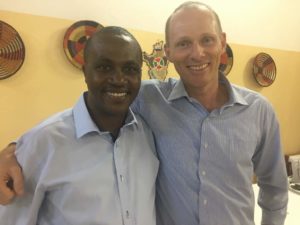 So it has been and will continue to be an emotional time. The overwhelming feeling I have at the moment is of stunningly deep gratitude to God for the privilege of the last 19 years – to have had the chance to work with such wonderful Burundian brothers and sisters, to have had such an extraordinary impact alongside them in so many spheres, to have been so protected and relatively unscarred (myself, and more importantly the family) through some truly difficult times.

Jesus said: “I have come that you might have life, and life to the full!”

Thanks for being true to Your Word!