I fell asleep on the sofa last night and woke up cold at 3am, so it was another bad night’s sleep. But hey, thanks to my terrible lack of sleep throughout the whole trip, this blog happened, so my loss has hopefully been your gain! At 6am, Brent and John showed up from to join us on our last leg, and there’s also Matt who came last night. 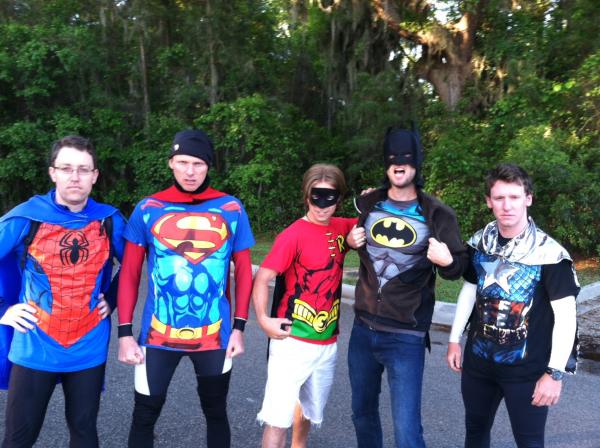 They brought superhero costumes with them so today I was Superman, Craig was Spiderman, Jeff was Captain , John was Batman, and David was his sidekick Robin. Our host Bill nipped out before 7am to bring us piping hot and fresh bagels straight from the oven, and then we were off.

We headed off back to Walmart which was our starting point. David filmed us and did a photo shoot in our new garb as we got the bikes pumped up, checked over, etc. But then the Security Officer showed up in wannabe police car. The poor guy – he was trembling, sweating, and pale-faced as he circled twice, reported back to his superiors by radio, and then bravely plucked up the courage to confront us five superheroes with our crime. He wound down the window, and I leant in. It smelled like he’d already peed himself. I thought of using my laser eyes to intimidate him, but he was already putty in my hands. It’s nice to just exude authority by your presence. Maybe I’ll wear my cape a bit more often (although it provides more drag than lift as I ride). He bleated some high-pitched blurb about Walmart not allowing photo shoots, and then wheeled pitifully away with his tail between his legs. Only then did I remember that I was meant to be a superhero rather than a villain, but wow, I tell you, it felt good!

We didn’t have many miles to complete today, so we took it easy, with long breaks. Actually it was very cold at the start, with full extra clothing needed, but the sun soon pierced through to provide the perfect weather for the climax to the ride. Unfortunately the only route up to was Highway 17, which is a very busy road, so we needed to be vigilant all the way. Brent and John got separated from us at one stage, but we hooked up again by lunch. By that stage we had passed the 3,000mile mark for the trip. It’s funny because you forget you’re a superhero, and people are staring at you as you behave completely normally! Similarly in I get stared at the whole time, and in some ways people likewise think I can solve all their problems, just because I’m white. I think overall I prefer to be regular Simon, neither a superhero nor a standout because of my skin colour.

A few ladies saw our sign as we were parked up, googled it, and then knocked on our door to give us a donation. One of them saw Jeff’s outfit and said incredulously: “Are you wearing a cape?” He explained we all were dressed as superheroes but then looked around and he was the only one, so I think she thought he was a little odd but still made the donation! Then another lady approached us and gave two donations – one towards the orphanage, and one, she insisted, was for a pitcher of beer for us – at least I trust that’s what she meant rather than beer for the orphans because that’s not how we go about training them to be ’s future shapers and shakers! Those two encounters were just a typical sign of being back in , recently cited by Times magazine as the city with the friendliest people in . 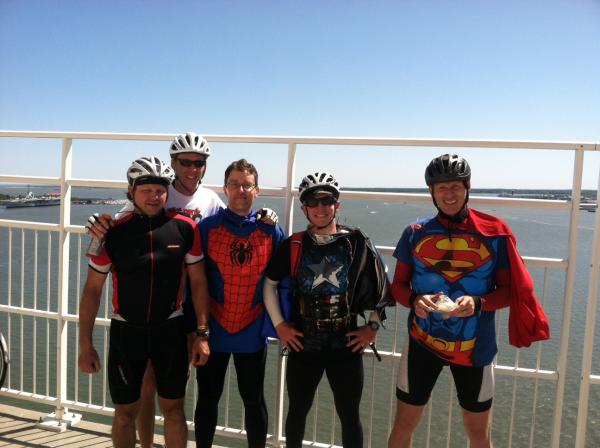 As we cycled the last stretch, I bombed ahead, similar to Craig a few days ago as he desperately wanted to see his family again. My speedometer melted as my superlegs rotated at a cadence never seen before. I was on a mission. I began sporadically screaming or whooping with delight. The realization hit home that we’d actually made it. After one such whoop, Jeff asked: “Is that your mating cry?!” No, it was sheer elation, joy and relief. I’d spent months injured before the trip, and I never thought this day would come. But then after one such spontaneous cry of happiness, in the next breath I burst into tears – tears of sadness for old Geoff, the instigator of Bike for Burundi, who is still suffering back in England after having to leave us half-dead on day two. His ordeal is ongoing following the medical evacuation. He’s sent messages of encouragement to us several times daily. I know how totally devastating this episode has been to him, even though he’s taken it on the chin like the tough nut he is. He’s such a precious friend, and today’s experience to me felt incomplete without him. Yet again, Geoff, we salute you. I don’t think the others had any idea that I was crying, as I was out at the front – except that my nose started pouring with snot, so I cleared it summarily, as is standard cycling practice. What is also standard etiquette, however, is to make sure nobody’s right behind you to receive it in their face. But I didn’t care at that stage, and duly heard Craig cry: “Yuck, Simon!” Sorry buddy, I did it for Geoff!

I actually now wish we’d worn these outfits every day of the ride. They just bring out the best in folk. People everywhere cheered us on, put their hands out of their car windows to give us a high five, called out to us, laughed at us. It was such a joyous atmosphere. In the city, a few groups of folk recognized us and squealed with glee. Some friends along the way were waiting for us, and had banners welcoming us home. One friend of Jeff’s was on his bike and joined us for the last few miles. Ron provided great entertainment at a traffic light when he literally fell completely sideways to the ground, still strapped into his cleats. Maybe the English contingent found it all the more funny as he’d been telling us as we cycled through the historic parts of town: “This is where we kicked the Brits out… this is where the Brits got hammered by us, etc.”

There was a fabulous greeting party waiting for us at our home. Lizzie, the kids, a few neighbours, other wives and family members, gave us a great welcome. 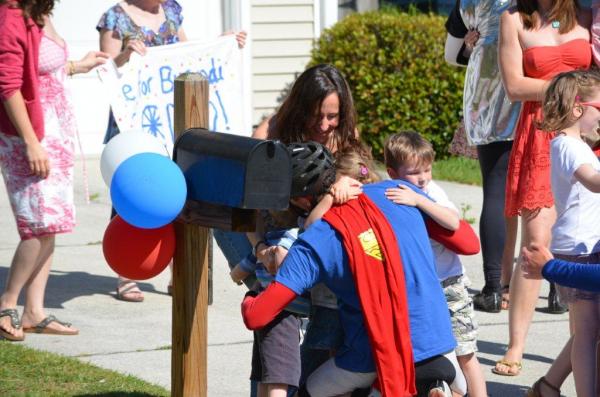 I can’t tell you how wonderful it was to hold Lizzie, Zac, Grace and Josiah in my arms and kiss them many times over. It’s been costly to them to be without husband/Daddy all this time, and I don’t take it for granted at all. Lizzie and co had prepared a gorgeous spread. We chomped away, caught up with loved ones, had a few speeches, and the little ones enjoyed playing in the RV. Then it was time to unpack all our gear, food supplies, etc out of the RV in preparation for the last symbolic stretch tomorrow to dip our tires in the on Easter Sunday with several dozen others.

I feel emotionally and physically spent. It’s time for sleep, at last back in my own bed, in my own home, with my own wife (just staying with the ‘owns’ there, but be assured, she’s the only wife I ever plan to be with!). I’ve offered her my honour, and she’s about to honour my offer, and however depleted energy stocks may be, there’s always a little left in the tank for that! Goodnight!