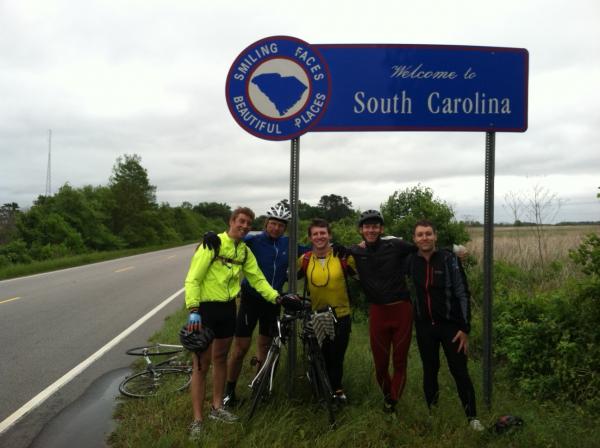 We allowed ourselves a lie-in this morning, until 730am, as we only had a short ride – we are too far ahead of our planned mileage, and in fact could have made it all the way back to Charleston today at a stretch (c.130miles) but we have cool hosts planned for this evening with me due to give a talk, so that wasn’t an option anyway. We clicked on the weather forecast at breakfast and it talked of thunderstorms, flood risks, and all sorts, so we braced ourselves for an unpleasant few miles. Joanie sent us off with much better instructions of roads to use, which doubtless saved us a lot of hassle.

So we had to drive back from Bluffton, SC, to Savannah, Georgia, to then enter South Carolina legitimately on our bikes. This is our tenth and final state. It was cold, miserably cold, thirty degrees cooler than yesterday. We had a headwind blowing at us. Our spare bike was not properly attached on the back of the RV and fell off with serious damage, so I hope that’s not a costly mistake for our last full day tomorrow. I’d put away all my cold-weather clothing two weeks ago, but it was really needed. Everyone felt it, apart from Craig, for whom it was normal English cycling weather. The rest of us have been used to only cycling in blazing sunshine and humidity, apart from the early days of this adventure when we were up in the mountains.

Ron continues to crack me up. I speak BBC English, whereas he speaks Southern English – if that is a real term. It essentially means he understands one in three words that I say, and is constantly asking me to repeat myself. To explain his struggles to understand me, he said with his slow gentle voice: “Mah father married mah sister but didn’t affect me none!” As we entered SC – the sign read ‘Welcome to South Carolina – Smiling Faces, Beautiful Places – he mentioned a lawyer friend of his upstate who had a divorce case to deal with. His client asked him in deadly earnest: “Now look, I just need to know something: if my wife and I get divorced, will she still be my cousin?” Oh dear, I guess I’m providing legitimate ammunition for Yankies against Southerners, referring back to yesterday’s blog!

Discussing last night’s gorgeous fat juicy steaks, Craig was expounding the environmental damage in terms of methane emissions, water usage to feed cows, grain consumed by cows, etc ‘You could kill world hunger by the Western world cutting out meat once a week’. I’m not doing him justice, because his words were very coherent, the argument cogent, it was vegetarian evangelism par excellence – but he got short shrift from Ron: “Oh, just go and eat a handful of grain and leave me alone!” 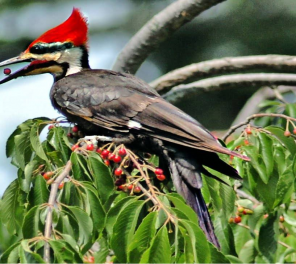 Aargh, it was miserable. We had four punctures within the first 29miles. We pressed on along Alligator Alley, hoping to see one of them and maybe catch one to provide as a pet to my littl’uns tomorrow – that might not go down well though. Jeff, now truly on his home-turf in terms of bird knowledge saw a beautiful one flutter by. As usual I kept my mouth shut to avoid confirming my ornithological ignorance, because I would have said it was a penguin or a puffing, but he chimed with great authority: “That’s a pileated woodpecker, with its red mohawk!” 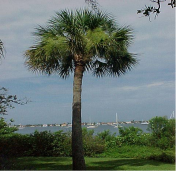 He then explained to us what all South Carolinians know – but not necessarily many other people – about the Palmetto palm tree, which is on the State flag. Unlike other trees – whose trunks are mostly dead apart from the outer layers – the Palmetto’s entire trunk is alive, which makes them really flexible. So during the American Revolution in 1776, when the Americans eventually kicked our British butts all the way back to Blighty, 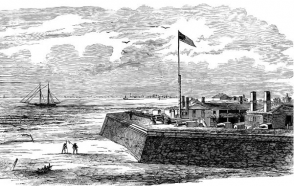 Fort Moultrie on Sullivan’s Island was made from Palmettos as they effectively acted like shock absorbers when the Brits fired cannon balls against her. Unlike regular trees or bricks, which would have exploded upon impact, the Palmettos absorbed the full force of the cannon balls and withstood extensive damage, being so sturdy. And so the Palmetto became famous and a symbol of pride – thanks Jeff, glad to have you on the team in more ways than one.

A lovely bunch of Bluffton folk were waiting at Parker’s station to encourage us on our way, and I’m afraid we kept them waiting about ninety minutes. Craig’s folks showed up too. So we had lunch, feeling very weary, windswept and cold. It goes down as our least enjoyable stint on the road, counting down the miles until we reached Beaufort. A one-mile stretch over a bridge across the water was memorable in terms of how exhausted we were as we pounded into the gale.

Bill and Cindy were our delightful hosts for today, whom I’ve met a few times over the last couple of years. We got to them at 4pm. Strangely we were at least as tired as on other days when we’d cycled twice as long because of the sapping wind that buffeted us all over the place for several hours. I fell asleep on the floor before a load of their friends arrived for a lovely evening with food and a talk by yours truly. Now I’ve just spoken to Lizzie, and am counting down twenty hours until I can hold and kiss her again after thirty five days apart. Can’t wait! She told me how Grace (4), when having her goodnight chat and cuddle in bed just now, made a circle on her tummy and said: “Mummy… are farts round?!” That kind of searching and inquisitive mind fills me with pride and hope for future generations of Guillebauds! So on that profound note, I’ll call it a day, for almost the last time. 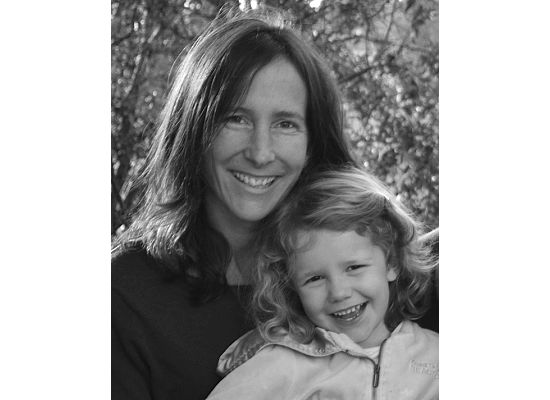