Happy Easter! Well, it was such a pleasure to wake up back in my own bed, with even a lie-in until 634am when Josiah (2) woke up. Things have changed in my absence. He no longer wears nappies/diapers at night, and he said totally unprompted: “Can I share one of my eggs with the orphans?” which I hope is a sign of a future man of compassion and generosity. One less positive development is that he now says ‘wadder’ instead of ‘water’, which is slightly disconcerting, and we’ll have to thrash that accent out of him before it gets too entrenched (oh dear, that’s the third prejudice I’ve revealed on this blog, what a bigot I am!).

It was a frenetic early morning of going to pick up bread from the bakery, getting all the kids ready as well as a picnic together for thirty people, and then into the RV and off to Boone Hall Plantation for the beautiful St Andrew’s Easter service. 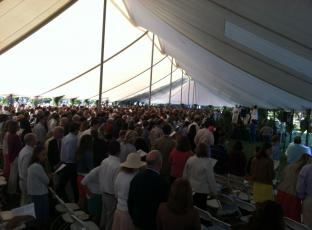 Each year they put up a huge marquee which seats 4,000 people, and that was always the focus for us on our ride as the climax to Bike for Burundi. The weather was cool but sunny, everyone was spruced up, and it was fun to meet up again with so many people who had been supporting and following us over the last five weeks – it’s slightly disconcerting actually, bearing in mind how transparent I’ve been on this blog, to be talking to people knowing they know wa-a-a-y too much about me, the state of my backside, what I did last night (see yesterday’s entry), etc! My buddy Mark looked behind my back and said: “Just checking your fanny’s still there!” That’s a double laugh for me as a Brit because when we talk about ‘fannies’, we mean something else altogether. And that’s been one of the bonus joys of this trip, the mix of US and UK dynamics, with all the attendant misunderstandings and discoveries. 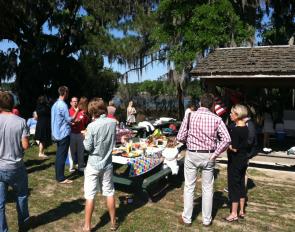 There was a long line of people waiting for the temporary toilets, and I stood in line as everyone else did; but Jeff is not yet used to being back in civilization, so he just peed in the bushes amidst thousands of pucker guests – Jeff, those days are gone now, from hereon in please use regular facilities like the rest of the developed world! We had a lovely picnic and then slowly mobilized for about twenty five of us to do the last 6miles to the Isle of Palms. We wended our way across the bridge and to the beach, before carrying our bikes along the sand, and dipping them in the Atlantic Ocean, thirty four days after doing the same in the Pacific Ocean. We each had a bottle of champagne and sprayed each other like Formula One winners, before jumping into the water and hugging each other. Precious times. The end has come. We could have done it yesterday, but it was nice to be with a whole bunch of others to share the experience. 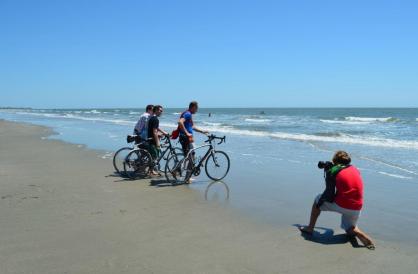 Furthermore, why finish today? Because Easter is such a significant day. Because without Easter, I wouldn’t be working in Burundi. Because without Easter, there’d be no hope. The history of humanity swung on the fact that about two thousand years ago, a closely-guarded tomb lay empty. The authorities, both Roman and Jewish, tried to explain it away, but suddenly a scared ragtag bunch of eclectic folk became emboldened to travel far and wide sharing at great personal cost about this extraordinary event.

I think back to Arizona, a month ago to the day. I was cycling along, in pain, feeling discouraged, and head down. The others further back shouted at me to raise my eyes. I looked up to see the name of the town we were entering: Hope! Once through the other side, another sign greeted us: Beyond Hope! But the original Easter events mean that we’re never beyond hope.

There was a crazy old pioneer in ancient times called Paul whose sudden transformation gave us the term ‘Damascus-road experience’. Initially he saw it as his job to wipe out this new-fangled cult, but then he got blitzed and spent the rest of his life spreading the good news. He suffered a lot, and there’s an episode he recounts where he’s wrestling with a ‘thorn of the flesh’ – be it sickness or whatever – that he just can’t shake off. He says that he asked God three times to take it away from him, but eventually got this answer from God: “No, my grace is sufficient for you, for my power is made perfect in weakness.” So Paul goes on: “Therefore I will boast all the more gladly about my weaknesses, so that Christ’s power may rest on me.”

What are you on about, Simon? Well you see, three days before I was due to fly out to LA to begin Bike for Burundi, I tried fifteen minutes on the cycling machine in the gym, after five months of injury, and gave up. My knees couldn’t take it. I was totally discouraged and weighed down. We’d spent so many hours of planning, preparing, emailing folk, etc, and I was going to crash out on day one with weak injured knees. However, my incredible physical therapist, Jill, reassured me: “Simon, you can do it! This is perfect. If you weren’t injured, you could take all the glory at the end. As it is, when you finish it, it’ll have to be God who gets the glory because your knees are just so weak.”

So there you have it. What I didn’t tell you throughout this blog was that I tried to pray every single mile of the journey: “Lord, this is for your glory.” Of course, I sometimes forgot, and might have gone dozens of miles without praying it. But then a shooting pain would quickly get me back to that prayer. “Every mile for your glory, Lord!” And Jill was right! I did make it. I can’t believe it. It’s an amazing feat. But plenty of people have accomplished it before us, and will do after us. The amazing thing for me is that my knees were shot, and I shouldn’t have made it, but somehow did. And for that reason, with Paul, I will boast all the more gladly about my weaknesses so that Christ’s power may rest on me. He’s the reason we embarked on all this. He made himself ultimately weak on the cross, to the death, so that we might be raised up with him in his resurrection. 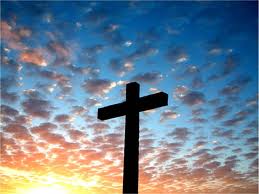 Wow! If you don’t get it, then just check out what Easter is all about. Give it a really good look. Feel free to ask me any questions, or someone you know whose life reflects the beauty of an amazing God. And may the empty tomb with the stone rolled away rock your world as it has mine!

All good things come to an end, so they say, although the ramifications of Easter defy that cliché. But in the case of this blog it’s true! I’ve enjoyed it. I hope you have. Now get off your laptop, grab hold of your life, and live it!