At breakfast, Liz said she was going to join us on the first 12miles of the ride, which was great because it meant we could have some more time with her. She’ll turn 60 this year so is no spring chicken and feared she’d slow us down, but we’re no speed merchants anyway, and having others join us always adds to the mix. We made it to our launch pad, got the bikes ready, and she promptly fell off as soon as she got on! I had just vomited up my breakfast, annoyingly, because I’d swallowed six pills in one go and they’d got stuck, then I’d gagged, and hence the regurgitation. But those pills are precious, so I picked them out of the slightly fermented milky oatmeal mess again and swallowed two at a time instead! 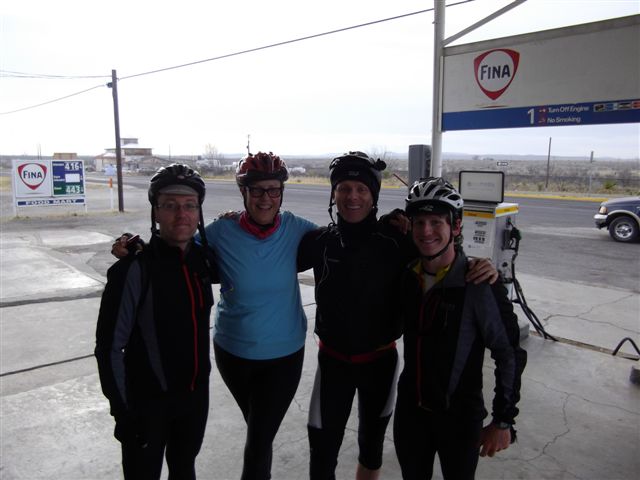 I would love to spend more time with Liz. If you hang out only with people who share your perspective on everything, then your views are just reinforced and not challenged. We have spent several days cycling along the Mexican border, and she is a defense lawyer for those unfortunate Mexicans. She would speak with tears in her eyes about them as I do about Burundians. Yet in my experience many people, and particularly many from the Christian community, have such dismissive black and white views on immigration. So many of the drug mules who try to come over are forced to at gunpoint, or their families are threatened. Once caught and sent back, they are killed on the spot if they don’t immediately turn back around and try again. What would you do? So of course the situation is much more complex than we might think. There is so much desperation in people being willing to risk their lives crossing the desert to get to the ‘promised land’ – and indeed many do die in the process. Clearly you could not have open borders because then the USA would be flooded with extra people and implode; but I have heard so many ugly comments about Mexicans from people who should know better, who purport to follow a Saviour who was a refugee himself – it certainly challenges one’s thinking.

We talked about other stuff as we pootled along. Her brother is a ‘Bible-thumping Christian’, in her words, full of judgment and condemnation, most obviously because she is with Mike (lovely bloke) whom she’s not married to. Her brother, like so many others, is filled with intense hatred towards Obama and all things Democrat. So in hosting us, Liz knew from our website where we were coming from in terms of being people of faith, and was perhaps concerned that we’d be of a similar ilk (although not too concerned as she’s very comfortable with who she is!). She’s been pleasantly surprised with us, I think, and said as much. It just made me sad that so many followers of Christ are complete turn-offs to people on the outside. We’re meant to be all about grace but often exhibit such a lack of it. There’s a fascinating documentary on Netflix called: ‘Lord, save us from your followers’. Obviously there are plenty of great models out there of authentic, sacrificial, loving, conciliatory followers of Christ (as we are trying to be), but still large numbers of religious bigots (perhaps more frequently from the hinterland, but by no means exclusively) mean we all get tarred with the same brush.

These comments are more US-specific. The scene in the UK is significantly different. Talking religion and politics as I just have is a sure way to alienate some of you(!), but God is not a Republican, he is not a Democrat, and those of us who say we follow Him have a self-imposed higher standard in terms of how we talk about, treat, and handle those who don’t share our views. I could say so much more on that, but I’ll stop there. Suffice it to say, hanging out with Liz (and Mike and Albert last night) was fabulously refreshing. Do we see the world the same way on all levels? Absolutely not, but we don’t have to. She is a hoot. And in terms of going the extra mile(s) (literally!), of demonstrating kindness, generosity, hospitality, openness, etc, (i.e. the fruit of the Spiriti), she was amazing. And I’m now writing this from one of her other houses, this time in Sanderson, after a grueling day on the road. 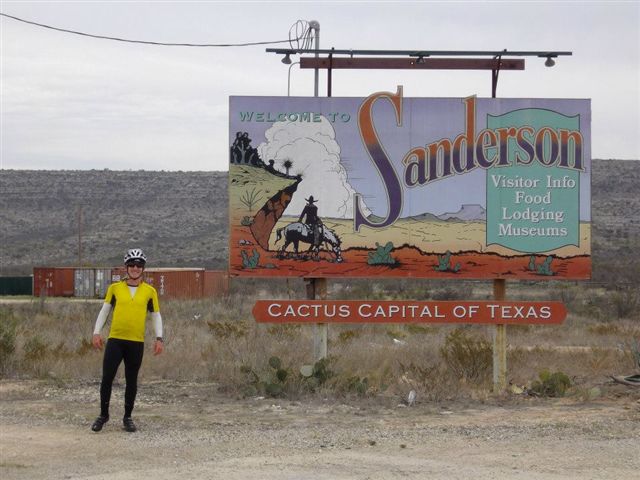 Mike was going to pick her up to take her back, and sure enough, he drove past us near the end in a red truck. There’s a very common sign around the State which reads: ‘Don’t mess with Texas’. Well, on the back of the truck was the sticker: ‘Don’t mess with Texas women!’ That’s right, Mike, you don’t want to mess with Liz, we all agreed! We left her at Marathon, a small dying town which is really only sustained by an oil tycoon from Houston. With the wind at our backs, we hammered out 65miles before lunch, and all was rosy. We stopped in Sanderson for an interview with the local paper. All publicity is good for the cause, I guess. Then we pressed on into what turned out to be quite a nasty headwind. It’s slightly soul-destroying to go down hills at 9mph that you should be doing 30mph on, but such was the fierceness of the gale, further shown by the fact that the wind was blowing rivulets of spittle out of my mouth!

At 431pm, four cars went passed us in a row, and Jeff said it must be rush hour – because in general we were so isolated and they were few and far between. He then had his head down as he chugged along, and failed to see a rock in his path. His front wheel burst, and at the same time his back tyre (USA spelling is tire, UK tyre) got a thorn in it. So the double-puncture took a while to fix. Meantime we’d told John to go ahead another 16miles to the 100mile mark. Back in saddle, we pressed on. Every mile or so, our nostrils would fill with the acrid stench of rotting flesh, and we’d look up to see the shriveling carcass of a deer or a cow or a Havolina pig (I’ve been talking about wild boars for the last few days, and now we’ve discovered what they are). Then Craig had a puncture, and we had no more spare inner tubes. We’d already reached the 103mile mark by this stage, still into the fierce wind, but John had got his mile-markers wrong and was further ahead, and there was no phone reception. We didn’t know how much further he was, having expected to see him around each successive bend, but he wasn’t there. It wasn’t a big deal, but it highlights how mental a game this is, because those three miles were such a drain as we’d expected to be finished by then, having wanted to quit about 15miles earlier anyway. So, what with Craig’s puncture, we had to wait to flag down a car to go and tell John whenever they came across him that we were back where we were and stranded. As it happened, it didn’t take long because he was actually just around the next bend out of sight! 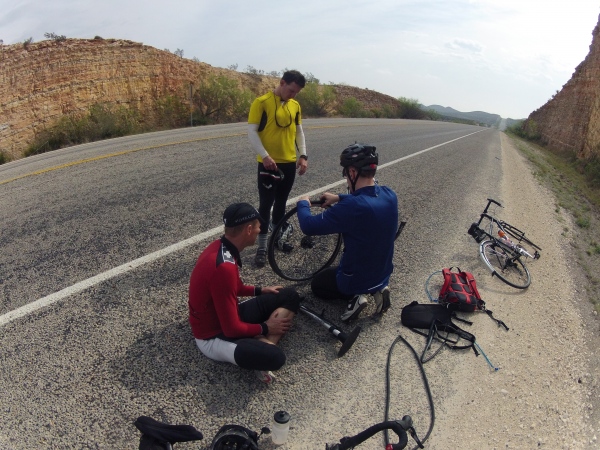 I spoke to Lizzie who had just dropped off my folks at the airport to fly back to England. They’d been over to visit and help out in my absence, so she’ll now have three weeks to look after the gang by herself before my return. All the kids were sad, and Zac (6) said: “This is the saddest St. Patrick’s Day ever!” It’s probably the first one he can remember, but it’s a measure of how they are feeling. Josiah (2) has been a bit tricky in my absence, and I’m so aware that Lizzie and the kids are sacrificing a great deal for me to be doing this.

So tomorrow is a full day off, as we’re ahead of our plans. We’re happily and exhaustedly ensconced in Liz’s second (or third or fourth) home – apparently things are so cheap here that houses cost about $40k. We smell fresh after a lovely shower, and Jeff’s cracked open his ‘Anti Monkey Butt Powder’, if you can work out what that is for! Sanderson is so small that it doesn’t have a single restaurant or bar, so I asked a local lady where people hang out on Sunday. She said at church, and then at the ice-cream shop, so that’s our plan for the morrow. Have a good one!