It was a pretty borrrrring day, at least the first half was. Overall, in crude terms, we did 84miles at 13.6mph average from Valentine to Marathon (almost). We stayed at a basic RVpark in Marfa (has to be said with a cockney accent) with no showers or internet access, just electricity and water – in fact considering we drove 35miles to get there, I’m not sure it was really worth it. So we got up at 515am and drove back to Valentine to start where we’d left off yesterday. On the way, as per usual, I phoned the family. This was my conversation with 2-year-old Josiah: “Good morning, Josiah, how are you?” “I don’t like you!” “OK, well what are you doing?” “Nothing.” Game over. We usually do a bit better than that!

There was no love lost in Valentine, it truly didn’t live up to its name. Actually, I never saw a living human there, be it yesterday afternoon or this morning when we got ready. It’s just a run down collection of ramshackle housing – that is, apart from this glaring exception, a big pristine sign for the local family and cosmetic dentist! It just looked so out of place. The guy’s obviously made so much money to afford a nice sign by pulling everyone’s teeth out because some people in the area seem to have more fingers than teeth here! Maybe his tools just consisted of pliers, hammer and chisel.

Part of the joy of doing this trip with Craig is that we are reminiscing about old university days and dredging up memories and names of people that had lain dormant for nearly two decades. I’d been thinking about my housemate Tommy’s marijuana plants growing on his bedroom window sill (name changed because his Mum is a friend too and she’s probably reading this!). I couldn’t overtly destroy the plants but I cared too much for Tommy’s well-being so I regularly urinated on them, hoping to kill them off, but actually I think that’s the time they went through real growth spurts, so my strategy backfired. I’d been there and done that on the drugs scene at school, getting busted on my last day by Dad, whose handling of this arrogant, petulant, combustible 18-year-old at a crisis point was treated with such deftness that it ranks right up there as one of his best parenting moments. If he’d barked angrily at me, I would have done the same back; but no, he just made me feel like a fool, and I remember resonating with his line: “Don’t try to dredge up some spurious argument to justify yourself!” I didn’t know what ‘spurious’ meant, but I knew I was being an idiot, so I finished off my remaining gear the following afternoon (‘Waste not, want not’, as I thought), and haven’t touched the stuff since July 1991! Why this random info? Read on…

We’d been advised to change our journey plans from the original ACA Southern Tier Route, and it did cut out some mountains and save us 9miles, but actually as Jeff said: “Next time we listen to someone’s advice on directions, let’s find out if they’ve driven the route by car or cycled it.” You see, it was the worst stretch we’ve been on. Miles after tens of miles of straight bumpy road – you wouldn’t notice it in a car, but it was jarring with constant vibrations for us cyclists. We had to try to keep cycling on the white lane marker on the side of the road as that lick of paint probably took off 20% of the juddering.

But the hallucinogenic effect of staring relentlessly at that white line was the positive flip side to the negative tedium. Why don’t you try it at home? If drugs are out of the question, as they now are for me, then this is a legitimate alternative. Paint a white line on the carpet, or draw one on the wall or ceiling, and just stare at it for two hours non-stop, maybe rotating your legs at a cadence of 60-90 turns per minute. Slowly you’ll experience what we three today drifted in and out of. And then after three hours, wow, I could see a chicken jalfrezi on the horizon coming towards me, with Sag Aloo and Nan bread, followed by Twiglets, Doritos, an Ile Flottante, Nerds and After Eight mints, and then Lizzie beckoning me towards her, and then… I’ll stop there. 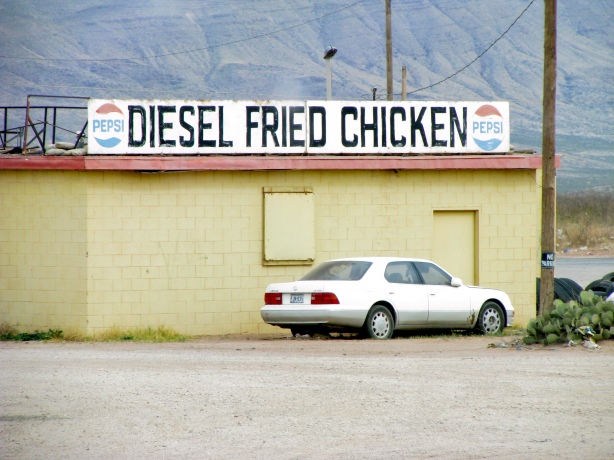 When we had clawed back the 35miles to Marfa, we stopped off at Dairy Queen to get internet access and send yesterday’s blog. Just then, another biker gang turned up, sending frissons up my spine after our last experience a few days back getting run off the road. But these guys were a different breed, very friendly, middle-aged and just out for a ride to Tornillo. I chatted with a few of them, and then this one chap said: “You know, if your cycle had a motor on it, you’d go a whole lot faster!” Quick as a flash, when he heard what the biker had said, Jeff retorted: “And if your motorcycle didn’t have a motor, you’d be a whole lot thinner.” And then it kicked off, forty of them against us three, so my two-year pre-teen judo stint stood me in good stead to hold my own in the pitch battle as ice-creams and milk-shakes were hurled across from rival tables. No, no, that was residual hallucination kicking in – they were far too nice for fisticuffs, and sedately purred off again into the distance.

I’m glad to say Jeff has joined the Bruised Buttock Brigade. I have a mixture of empathy and vicarious joy that we are now all in the same boat, that he’s not bypassing this integral experience. The physical aspect of these endurance adventures is fascinating. Take Craig as a case study (so it’s not always me moaning about my knees): he’s got a cracked rib, sun-burnt hands, sore feet from his cleats wearing away, aching backside, chafing wotsits, dodgy gutt, something I don’t think he’ll let me mention but he’s gone to bed so I can’t get him to veto or not so out of respect will not tell you, a burnt face, eye-problems from melting sun-cream dripping down from his forehead, took a bash on the head the other night – but the great thing about the human body that I’ve noticed is that you only really notice the one most painful thing. All the others, if they were at the top of the list of painfulness, you’d be moaning about, but they all pale into insignificance in comparison to the big one. ‘So Craig, are you OK?’ ‘Yeah, yeah, OK, just got a sore bum!’

We came to Alpine, and stopped off at the RV which was parked outside McDonald’s. Jeff’s bike was playing up again and needed dealing with. Craig went in to use their toilets, and was greeted by the town’s only bike mechanic. I love those coincidences! We went to his shop and he repaired the bike. Then we were back on the road. Now Craig had been complaining that his cleats were slipping out of pedals, but he managed to fall over sideways again because he couldn’t get them out in time – beautiful irony! As we made our way towards Marathon, the weather turned, lightning struck, there were a few twisters twisting a couple of hundred yards away, we experienced our first rainfall of the whole trip, and now we were cycling into a vicious headwind. Progress was slow. And then Craig’s cleats died a death, so we had to call it a day, missing out on a few more miles – but it’s no great loss because we are ahead of our schedule as it is. 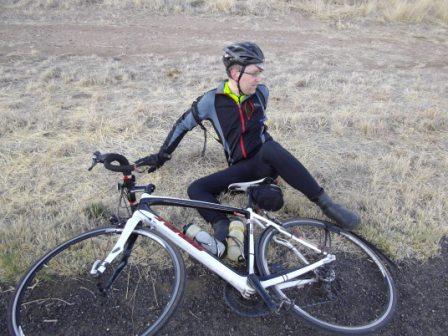 So we headed back to Alpine for a superb evening at Liz’s house. She’s a ‘Warm Showers’ host – people who will take in cyclists and give them a place to wash and eat – so we didn’t know anything about her. But she was/is absolute class. After showering and making ourselves presentable, we scoffed loads of her yummy food whilst laughing lots as the banter flew between her (a strong Democrat) and her boyfriend of fifteen years Mikey (a stronger Republican) – what a fun and funny pair! Such evenings are real highlights amidst all the hard grinding out of miles. Another guest called Albert had the same cleats as Craig and was willing to donate his, so that we can continue early tomorrow morning rather than have to wait until shop opening hours, so that was another godsend. I could write a whole lot more but this is getting too long as it is. I would have loved to have more time with them, but we were dispatched to bed at 930pm by Liz herself– not to be argued with(!) – to get our beauty sleep (of which I need much but don’t seem to be getting it, unlike all the others whom I have to bark at in the early hours of each new day to get them out of bed if we are to make it away in time).

OK, if you don’t hear from me tomorrow or the next few days, it’s because we’re deep in the Boondox with no internet access. Over and out.