So we’ve finished Week 2! In the last six days we covered 96miles, then 107, 108, 103, 84, and 103, bringing the overall total to 1,203miles, so we are over a third of the way through. People who have ridden this Southern Tier route before us (most of whom take 10-30 more days to do it), have said that if you can get through the first two weeks without getting broken by it, then you’re well on your way. So that’s encouraging.

Today was a rest day. I’m the worst sleeper, but forced myself to stay in bed until 830am. However, the honking freight trains going by from the early hours, and Jeff’s phone alarm clock going off every five minutes which he’d plugged into the wall to recharge just out of reach until I roused myself – both meant that it wasn’t such a deep sleep, but hey, we are in a beautiful house, with access to showers, washing machine, etc, so no complaints.

I was due to share at First Presbyterian. Before we went there, Jeff set up our GoPro Bike camera on the back porch on a ladder to film himself cutting his own hair. I don’t think it was vanity, but it looked a little weird. He’s just told me it was for David’s documentary, and he wanted to see the development on time lapse, so let’s settle for that still-quite-weird explanation. Whatever, the freshly-shorn version of young Jeff is a definite improvement, although that doesn’t include in his hearing, because we were discussing vegetables that are called different things in UK and US English. Craig said: “What you call ‘eggplant’, we call ‘aubergine’. And Jeff said incredulously: “You call eggplant ‘air-conditioning’?!” Incidentally, old Geoff’s making slow but hopefully steady progress, and will be flying in to San Antonio to rejoin us on Thursday, but probably not in a cycling role any more. It’ll be great to have him back for the banter. 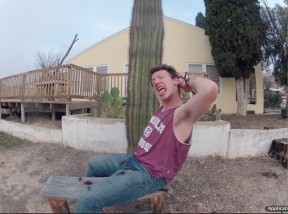 (Jeff pretending to get strangled by his scissors)

Pastor Toby’s only been in town a month, and is the only full-time pastor in town. Sanderson has 850 inhabitants, and was a lot busier in years gone by. But the ten-year drought in the 90s (pronounced ‘drouth’ here, which sounded strange to our ears, but their’s must be the right way because what do we know, they’re the experts in drouths!), and a horrific train crash with a number of fatalities led to its apparent slow demise. Toby and his wife are great folks and have a good challenge on their plates. I shared my story and about our work in Burundi, and Toby then preached briefly on the difference between a scarcity and an abundance mentality, which was excellent. The congregation numbered twenty five, and they were all extremely friendly. Many are ranchers – not farmers – there is a difference (cattle v arable), and the distinction is an important one. I was corrected by someone because the former consider themselves superior to the latter. It hasn’t really rained here for three years, so things have been really tough. One old rancher, who remembered the 50s drought (sorry, drouth), reckoned that these last three years were a shorter time-frame but that the overall state of desperate dryness is worse than ever before in his experience. “How is your morale?” I asked. “Well, I don’t know what I’d do without my faith. And it’s all relative when I hear what you have to say about what’s going on in Africa.”

The only place to eat, so we thought, was the Dairy King. We headed off there, but it was shut. Next stop was the grocery store to see if we could buy a frozen pizza or something. The delightful lady rang the Dairy King owners and asked why they weren’t open, when they would open, etc, and spoke to them, but whatever the situation, they weren’t opening. She then actually offered to make us pizza herself – what incredible kindness! Texans, from what we’ve seen, are just incredibly warm and generous folk.

We declined as she was busy with other wannabe jilted Dairy King customers, and drove past the flower shop, ’Tis the Season, run by Buddy and Randy (you US folk, you’ll never have met an Englishman called Randy, and that’s because it means sexually excited – worth bearing in mind when naming your kids). John had a good chat with them, and they are simply lovely guys. They’re not just lovely, but lovers to boot. When they moved here a few years ago (it being a very conservative small town), they anticipated some very strong reactions. But because they are so nice – so we’ve been told – there is a kind of collective denial. “They’re not gay, they’re just house-mates!”

We picked up some food from the Stripes gas station, and then caught up on emails, skyping family, etc back at church as we had internet access there, which we hadn’t expected this weekend. (Basically, if you don’t get a blog from me over the next few weeks within 36 hours, the reason is that we will have overnighted somewhere totally obscure and inaccessible – that certainly constitutes vast swathes of Texas). We got a lot of dull stuff done like bike maintenance, washing pillow cases, towels, etc. Generally it was so nice to have a break from the saddle (my butt is sending constant gratitude signals to my brain, quite the most lovely sensations you could imagine!), as we gear up for another torrid time over the next six days. 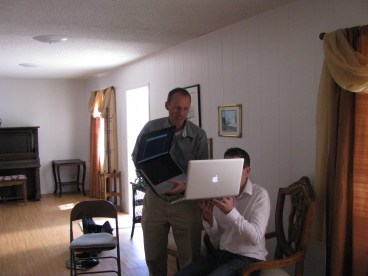 So the adventure continues. Tomorrow hopefully we’ll be past Del Rio, and we’ll catch up with you then.