So our worker Jean-Claude shows up with his customary smile and cheeriness on Saturday. We actually call him ‘God-Bless-You-Jean-Claude’ because his every sentence ends with ‘God bless you’. He’s such a nice man. So kind. So gentle. Deeply holy. Would never steal, always reading the Bible, just top notch holy Joe – and on his T-shirt, there’s an irate golfer throwing his clubs into the lake with the caption ‘Life is Crap!’ GBYJC was happy to be photographed and I’m as yet undecided about telling him because it’ll mean he won’t wear it anymore and that’ll mean a few less chuckles for us in the future. 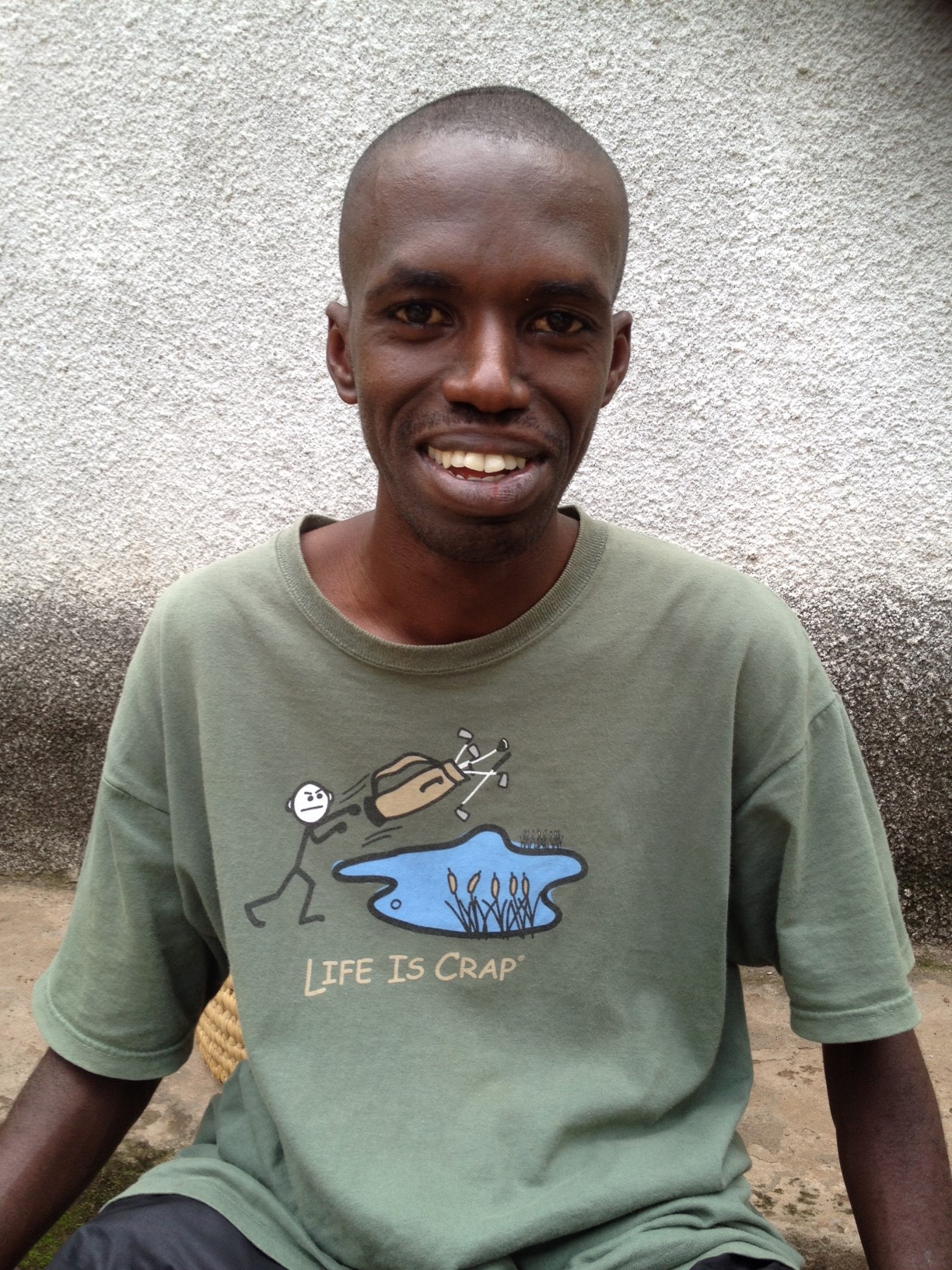 I love these T-shirt comedy moments. What goes through your mind when you see a woman in the stinking heat with a T-shirt saying: ‘We Eat Yellow Snow’?! And lest you say it’s cruel to laugh at these folks who simply don’t understand what they’re wearing, let me tell you I love laughing at myself and my race too. As my Rwandan friend Manasseh wrote to me last week, it definitely works both ways. He was at a church conference in the UK in which someone had proudly decorated a kanga (an East African cloth for women) on which were inscribed the words in Swahili: ‘The poison of a woman is her speech’ – priceless! Another friend, David, was in Costa with a Mandarin-speaking friend who spluttered in his coffee because the girl on the next table had a tattoo which meant: ‘Please do not let your donkey eat the flowers in this garden!’

Last week I was preaching at a school, and during the response time, when everyone had their eyes shut and were praying earnestly, I looked up and saw this guy: 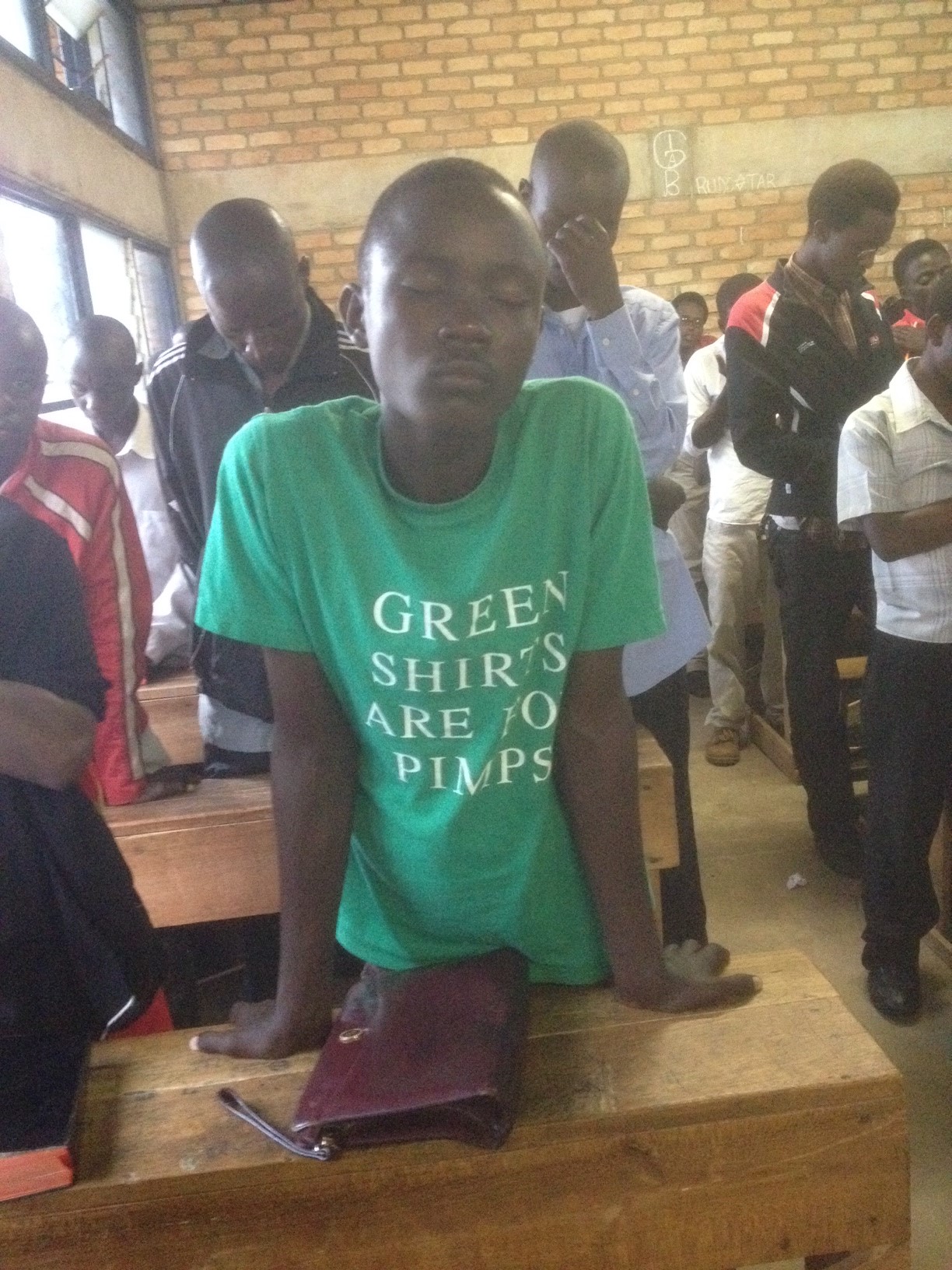 Clearly, yet again, he didn’t know what it meant – but who prints T-shirts like this?! Why are green shirts for pimps? I’ve spent a long time dwelling on that one…

And the comedy factor is obviously exacerbated by the context of holy people engaging in holy activities with the stark juxtaposition of seriously unholy pronouncements on their garments – like the drummer in the worship band doing his thang energetically with his T-shirt reading: ‘I don’t care if I go to heaven – at least I’ve been to Hooters!’ (for UK folk, Hooters is a bar/restaurant chain in the US whose employees usually have a big pair of enhanced personalities). Or the soloist singing beautifully in a T-shirt emblazoned with ‘I’m not a gynecologist, but I can take a look if you like…’! Or the time at our international church Xmas celebration a few years back, when the cutest of cute little girls was wearing one which said: ‘Drink ‘til he’s cute!’ And one female Sunday school teacher got up before the congregation to orchestrate the recital of that week’s memory verse with her T-shirt that said: ‘Just Another Sexy Bald Guy’!

And in case I get accused of only picking on my own tribe, it’s not just Christians that fall unwittingly into this trap. My friend Ben in Guinea last Friday was talking to a devout Muslim, and his T-shirt really takes the biscuit: 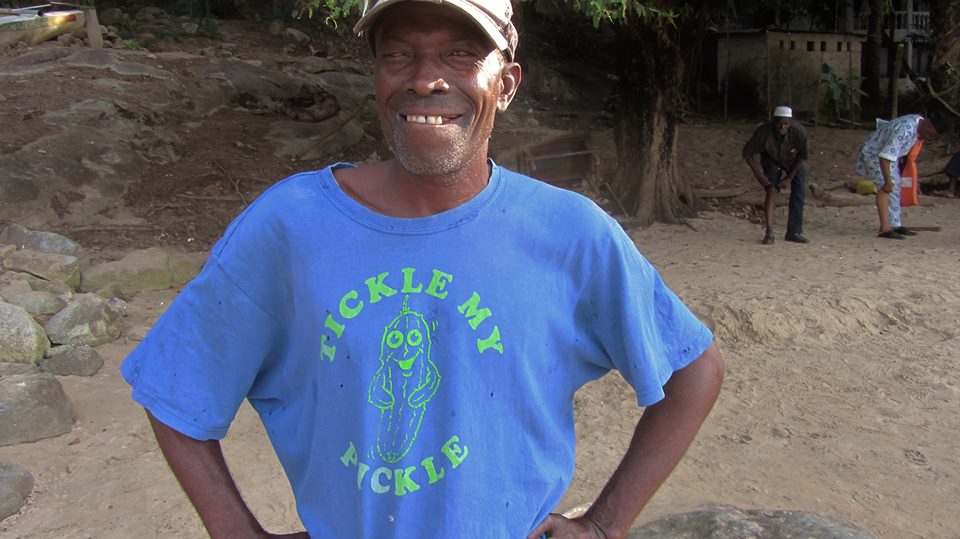 My dear buddy Paul arrived in Burundi and hooked up with his local partner and colleague, a likewise devout man who beamed with joy and embraced his new boss with open arms and a shirt reading: ‘10 Inches of Pure Love’ – for real!

We’re drifting towards the less appropriate end of the spectrum. There are some really crude ones that simply don’t make the cut. My mate Graeme saw a taxi-moto rider without a passenger on the back. His one read: ‘If you can read this, the b**ch has fallen off’ – no wonder he didn’t have any customers!

And then some are tinged with pathos: Pippa, writing about her time in rural Uganda, told me how she saw an old man hobbling down a dirt track on the outsides of his feet, having obviously walked on two club feet all his life, with a T-shirt saying ‘I ran the 1986 Flora London marathon’. Emma was at an orphan nursery in Kenya when she saw a child wearing a top which said: ‘Right, that’s it Mum, I’m off to live with Grandma!’

I’ll call it a day. A big life lesson from Africa is that life is tough enough as it is (indeed ‘crap’ for many), but laughter is truly one of God’s best gifts. As you read this, I hope you’ve had a few chuckles.