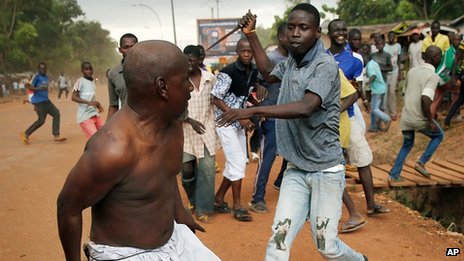 (lawlessness and senselessness as men murder and pillage in broad daylight)

This morning’s latest, from my precious friend in Bangui:

We ask that you continue to pray for us. The number of Christians killed in these current incidents is continuing to rise. A second-year student at the FATEB Bible school was killed while he was in the Amitié hospital in Bangui. There have been reports of a number of sick people being dragged out of their hospital beds and executed. The anti-Balaka (wrongly referred to in the media as Christian militia groups) are continuing for their part to attack and kill Muslims.

The day before yesterday, in the afternoon, a young Muslim was about to throw a grenade into a crowd of people who had taken refuge in the Brethren Church in the Camp des Castors. FOMAC peacekeeping troops tried in vain to apprehend him, finally shooting him. This nearly caused an uprising. The Bible Society was looted for the third time and Bibles torn up, which only caused further pandemonium.

My nephew was beaten by anti-Balaka elements and had his ear cut off. He is at the airport at present, being treated by Médecins sans Frontières. The presence of Boko Haram Islamic militants has been reported in a commune near to the town of Bouar. It was apparently the mayor of the commune, himself a Hausa, who called them there. 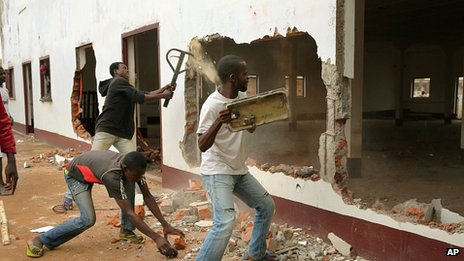 (looting a mosque in Bangui)

A number of people have been killed in Carnot, under the pretext of them being with the anti-Balaka.

We met yesterday afternoon with Muslim imans, heads of ethnic groups and “al’ hadji” elders, which gave an opportunity to rebuild trust following recent events. We are going to meet this afternoon to pray and begin a work of increasing public awareness with a view to encouraging reconciliation in different parts of the city. It is a work that has its dangers, but we have no other option.

This morning we are also holding a press conference with national and international media, to clarify the problems caused by this matter of referring to the anti-Balaka as Christian militia groups. Please pray, as this decision to take a clear stance will have its own consequences. Anti-balaka elements are blending into the general population in the different areas of Bangui, and are threatening those who do not encourage them in their actions.

Please pray for us.”