This is from my upcoming devotional. Too challenging? Any comments? 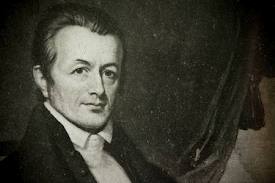 Galatians 6:14,17: “May I never boast except in the cross of our Lord Jesus Christ, through which the world has been crucified to me, and I to the world… for I bear on my body the marks of Jesus.”

Adoniram Judson’s proposal to his future wife was no soft sell: “Give me your hand to go with me to the jungles of Asia, and there die with me in the cause of Christ.” They reached Rangoon, Burma, in 1813. They spent six years language-learning before he preached his first sermon. It was seven years before he saw his first convert. He translated the whole Bible over twenty years. He was twice widowed, and six of his children died before him. He returned just once to the USA in thirty seven years. At his death there were seven thousand baptized Karen believers, and now there are over three million. 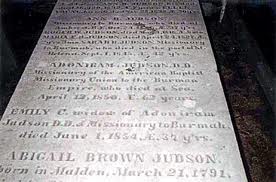 At one stage earlier in his life he was caught up in the Anglo-Burmese war. During a seventeen month stint in Ava Prison, his mistreatment was horrific and he picked up some ugly scars made by the chains and iron shackles that cruelly bound him. When released, he sought permission to take the gospel to yet another province, but the antagonistic ruler indignantly denied his request, saying: “My people are not fools enough to listen to anything a missionary might say, but I fear they might be impressed by your scars and turn to your religion!”

What a life! Hearing about such spiritual heavyweights can inspire on the one hand or discourage on the other as we see what total lightweights we are in comparison. Choose to be inspired rather than discouraged. We live in a different era and a different context, but we serve the same God who issues the same call, to live and die for him. Let’s not settle for bumper stickers and slogans when he is calling us to scars.

Lord, by your grace help me to choose the path of scars rather than slogans. Amen!