Last night, we’d stopped off at a nasty motel and booked just the one room so we could all have showers, and then crashed out, some in the RV and some in the dank, manky, musty room. At about 1130pm, what sounded like a loud drunk started jabbering away on his telephone just outside our door. It went on for a while, so eventually I got up and went out to politely tell the guy to zip it. I found an Indian man, sat comfortably in a chair, talking in Hindi with total disregard for those of us trying to get some shut-eye. He got my message, and quietened down, and in the morning when I saw him again it turned out he was the owner! I wonder how much repeat business he gets if that’s what he does every night…

We made an early start in the morning mist, and soon crossed the majestic Mississippi River. The levees to prevent flooding were absolutely massive, but levees certainly don’t always work, as witnessed by Hurricane Katrina a few years ago. When the Mississippi does flood, it obviously destroys whichever crop is growing at that time, but people still like to farm that land because the sporadic flooding means the soil is very fertile (if any of this is wrong, it’s Jeff/Samwise’s fault – he’s usually my source on these things). 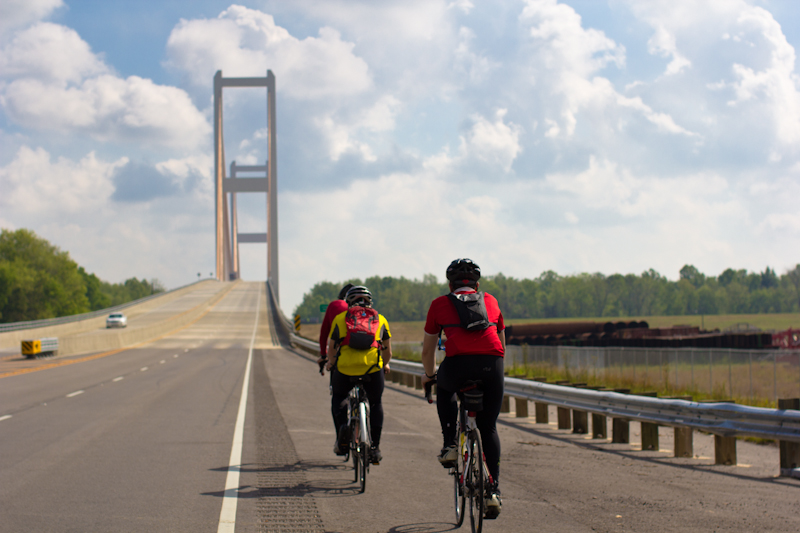 At last we came across a live snake, albeit a very small one, and according to Samwise it was a rough green snake. He could tell us anything and we’d believe him as it’s his field of expertise, so we trust him implicitly. It reminds me of a group I hosted in Burundi from South Carolina. We were up in the hills at a pygmy encampment, and were going to sleep outside amongst them. I spoke in Kirundi to all the Burundians and told them just to play along with what I was about to do. I then told my US buddies that we were going to enact an intimate and profound pygmy custom. Due to the pygmies’ close relationship with the earth as hunter gatherers, coupled with their awareness of how fleeting life is and how at any time they could return to the dust, when they received honoured guests, they would stand in a circle, grab some of the earth, spit on it, and then put it in the ear of the person to their right. This we all duly did in a deeply reverent and respectful way. It was very moving… until I admitted that I’d just made the whole thing up!

Louisiana is incredibly green, but maybe that’s just this time of year, I don’t know. What I did notice is that a lot of people must have died here (and maybe people even come to die here), because there seemed to be a plethora of cemeteries lining our route. Also, unlike every other state we’ve been through so far, this part of Louisiana doesn’t have counties, rather here they’re called parishes, probably a Cajun thang.

We’re really keen to catch an alligator. David saw one but it quickly got back into the water. I’m not an expert on alligators as I am on crocodiles, but I hope we do manage to find one. Most of my visitors to Burundi count it as one of their most memorable experiences when I take them to the Musée Vivant (‘Living Museum’), where the old man in charge, Albert, gets paid a meager $8/month. Well I always boost his wages with a tip which means he then lets me do just about anything I like, including getting out the pythons, spitting cobras, mambas (“This one will kill you in two minutes, that one in ten”, etc), and even more excitingly, getting into the cage with Lacoste or Romeo, 39 and 27-year-old crocodiles. The bigger they are, the slower they turn, so it’s actually very safe to jump over the railing and yank their tales, which may not sound very kind but they always come back for more. One visitor, in panic when Romeo reared his head, turned around and ran into a tree! Where else in the world are zoos so interactive? That’s one positive of Burundi’s lack of regulations!

On a more serious note concerning Burundi, public workers went on strike en masse yesterday to protest against soaring prices (water and electricity prices have quadrupled in the last quarter), so things are very bleak there, and I’m very concerned how things will turn out. Many people are dying.

Over lunch, I perused the internet on my Iphone and said to Craig: “Wow! Broad bowled Jayawardene on a no-ball when Sri Lanka were nine down with him on twenty three and he went on to make sixty three for the tenth wicket partnership, so it’ll be challenging for England on the last day, although they’re two down for a hundred and eleven with Trott and Pietersen well-established at the crease, so you never know but it’ll take a fourth innings record for them to pull it off.” Samwise listened intently to what I’d just said, and then said in bewilderment: “What in the WORLD were you just talking about?!” Welcome, USA friends, to the incomprehensible language of cricket! Craig spoke to his little girl, Beth (7), who told him that she was sleeping on Daddy’s pillow because of the comforting smell. Well, I don’t sleep on his pillow but I do share a double-bed with him most nights, and I don’t find his smell remotely comforting!

It was Craig and Samwise’s chance to laugh at me in today’s dog encounter. I normally ride at the front – not because I’m the fastest, actually because I’m the slowest, what with my dodgy knees, so I set the pace – and normally that means I can pull away the quickest from lateral attacks by grisly mongrels. This time, however, a boxer and a German shepherd were at my side before I had even spotted them. I was going too fast to be able to stop, but not fast enough to get away from them. So I pulled my left foot out of my cleat and started kicking frantically whilst waving my arm like a windmill and doing the loudest lion roar impression of my life. It worked. It was beautiful. I whooped with delight, relief and glee. Maybe I can get a patent to sell to other cyclists. The other two had stopped way back. A few minutes later, Craig sidled up to me and said with a totally deadpan expression on his face: “Very nice technique, Simon.” These dog attacks are amongst the unexpected highlights of the trip for me.

I’ve had a number of people enquiring as to the current state of our derrières, citing a dearth of info on the topic of late. You’ll be glad to hear that most cheeks are chafe-free and, although still bruised, acclimatizing to the regular rough treatment they endure on those razor blade saddles (particularly over Louisiana roads, which are the bumpiest so far!). My Dad had reprimanded me for sharing too much information on bodily functions and such like, but if many of you are suffering withdrawal symptoms, we might have to lower the tone again. OK, here’s one on a similar theme: one of our trip’s greatest mysteries has been revealed to me after many hours of cogitation over it. Both Samwise and I can’t understand how it is that Craig never (hardly) takes a leak whilst we both do all the time. I now suspect that the three-litre Camelback device he straps to his back and fills with ‘water’ each day is actually a catheter, which he then disposes of subtly each meal break down the RV lavatory. Does that sound like a plausible theory to you? Not sure how else to explain it…

We were cruising along, into the eighty mile range when things began to unravel. Samwise had his second and then third puncture, so we’d run out of inner tubes and needed to call John to bring the RV. But Samwise is a master tire changer now, managing a change in just a few minutes, so he may have funny feet but he’s fleet of finger. Once back on the road, we suddenly came to a dead-end. Something was wrong. The cue sheet didn’t match up with the road. We got out the GPS, and that didn’t match up either. My Iphone has a GPS on it too, and that helped complete the picture. Some time way back before Clinton, the cue sheet told us to go ten miles left when it should have been right. Doh! We were miles off track in the opposite direction. We’d pushed hard all day because we were being hosted that night in Red Stick (Baton Rouge), which was a long drive away, so we needed to make good time. It’s actually pretty impressive and surprising that this is the first time we’ve got majorly lost. We’ve overshot a road or two, and taken a few wrong turnings, but usually you realize within a few hundred yards. The mood grew more somber. Oh well, we just had to get as much caught up as possible. We reached the hundred-mile mark, and our usual ‘Hurrays’ were somewhat muted. I’m not sure anyone else laughed, but I had a good chuckle to myself at how rubbish I am at all things flora and fauna. I saw a bird, and in my mind said ‘that’s a kingfisher’. Craig behind me said: “That’s a beautiful heron.” And Samwise behind him said: “Actually that’s a great egret!” 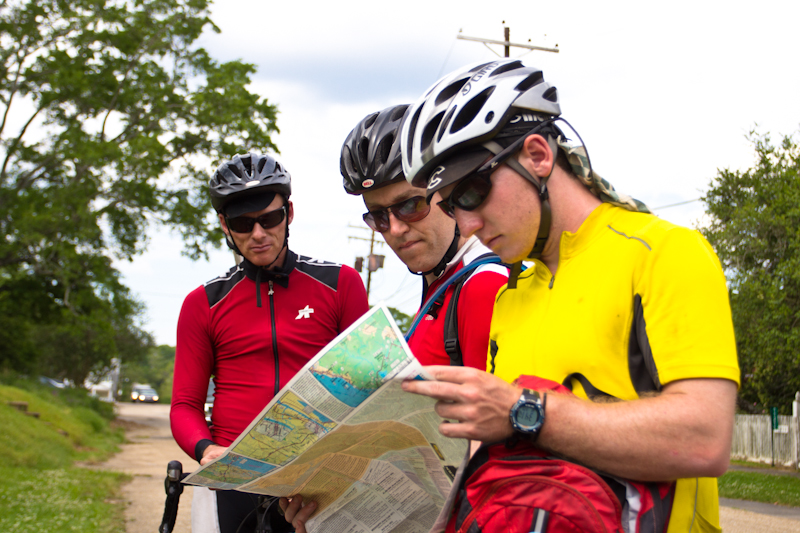 So we finished on 103miles, at an average of 16.2mph. Today we lost nearly twenty miles, so that’s not so good. But when we started the trip, we were averaging an embarrassingly slow 13mph (before my injury it was around 19mph), so I’m still just thrilled at our progress. It’s great to be alive! And now we’re heading into Baton Rouge for hopefully a fun and restful night with some more great people. And I’ve finished the blog on the drive there so can actually totally switch off and relax. That’s a result! See you tomorrow!