Last night was spent in Baton Rouge with the delightful Dentons. As soon as we got there, we were grateful for having made the long drive to get to them because they were so generous, had prepared great food, and having a hot shower, comfortable bed and a massage chair is always a bonus. But the downside was this morning when we had to get up at 5am to make the long drive back to Easleyville to our departure point. 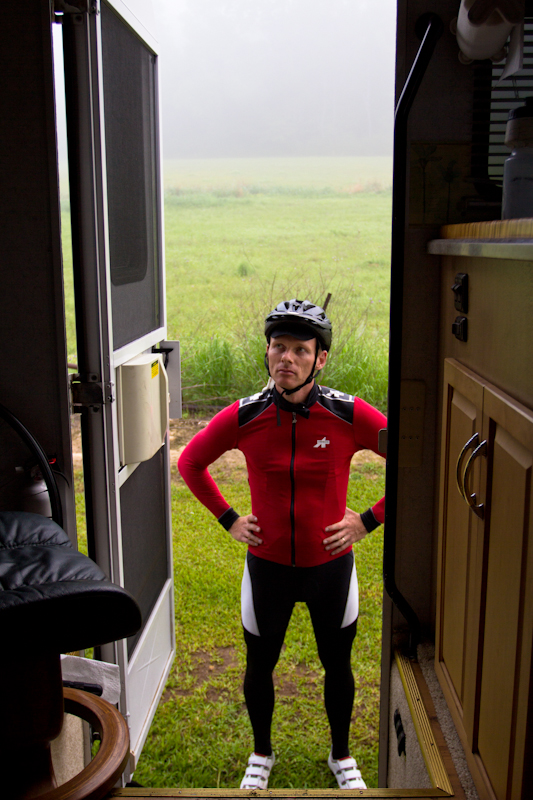 Some days are just a real struggle to get going on. It was hard to keep positive. We dozed in the car, and arrived with the sunrise to start another long day. There was a thick fog so visibility was down to maybe two hundred yards, which made us as vulnerable on the road as at any time on this trip. Craig’s got these flashing bits that fit on either side of his rear tire, so we were happy to have him at the back to take a hit if necessary. Off we rode, half-asleep, a generally heavy feeling hanging over us, exacerbated by the fact we got lost yesterday so had added miles to make up. I don’t know if it was because we finished last night and then spent a long time all crammed into David’s car (whilst leaving the RV at our starting location to save on fuel costs), but my knees were much worse today. It felt a bit like wading through porridge, not helped by the fact my back break was rubbing on the wheel so I was having to put in an extra 20% effort!

It’s always encouraging to talk to family on the phone. Both Zac and Grace’s classes at school have a map up and are plotting our progress across the USA, and Jill my physical therapist likewise has a map up in her studio as she, her staff and clients follow how we’re getting along. It’s all added encouragement to know people are lifting us up on days like these that are harder to get through.

We got honked at for taking a pee in the bushes. It happens often (that we get honked at), so maybe I’ve just got the wrong sense of what is OK and what is socially unacceptable. We were miles from any houses, on an isolated road, and facing discreetly away from any rare passing traffic, so what’s the problem? Are you on my side on this one? Whenever we get beeped at, I always think back to an incident in Ethiopia back in 1997, as twelve of us drove a truck from England to Kenya:

On arrival in sprawling Addis Ababa, we had just the one contact address, but no directions. I desperately needed to relieve myself, and was encamped on the front roof of the truck with my mate David, watching from above as cars and people bustled all around. For an hour we went to and fro, getting contradictory directions from literally dozens of people. I simply could not wait any longer, and was wondering what emergency contingency plan I could concoct. At some traffic lights, for the umpteenth time we asked for directions. Below me was an open gate and a rare plot of grass. I saw my chance. I jumped off the top of the truck, and told David to let the others inside know that I was doing important business, so that they would wait for me. I darted through the gate and began relieving myself in the flower bed. Immediately two soldiers and a ferocious Alsatian came running at me, all three of them barking at me: “Stop! Stop!” I looked over at them, then down at what I was doing, and then back at them, facially gesturing that I simply couldn’t comply just yet with their wishes. They understood that, so instead went to lock the gate, which now seemed much bigger and more foreboding. What’s more, I could see the truck beginning to pull away. It was my turn to shout “Stop! Stop!” Yet again I was desperate, but now for a different reason. David fortunately heard, and the truck pulled over. But now I was locked within the compound. I was finished by this stage, and came over and tried to shake the soldiers’ hands. For some strange reason they didn’t want to. They were furious, seething, sweating profusely, trembling, snarling, muttering away in Amharic, which I obviously could not understand. “I am so, so sorry. It was a mistake. Please forgive me.” Time stood still. It felt like an eternity. But finally they reluctantly opened the gates in response to my shameless grovelling, and I gratefully rejoined the truck. It was then that I made the discovery that I had just urinated on the front lawn of the Ministry of Immigration! I believe I was blacklisted and will never be allowed to enter the country again!

We came across a copperhead in the road. It had been run over but was still alive, so we had to be careful as they are venomous. Jeff and I were all excited about it, and I took a photo of Jeff with his grinning face as close to it as he felt safe, with Craig saying: “Leave it alone! What are you doing? Why are you doing this?” And then I put the poor thing out of its misery. 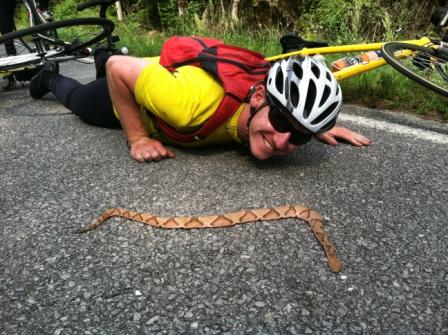 More dog attacks followed, but I’ll only recount new ones if there’s a distinctive twist in the tale/tail. Actually one little Chihuahua came running towards us bleeting pathetically, which reminded me of my friends Sarah and Jean who were returning by car to San Antonio after a week’s break in Mexico. Shortly before the border, they saw a miserable Chihuahua, much the worse for wear, lying in a drainage ditch next to where they’d parked. They felt sorry for the wretched mut, so they hid it in their car, crossed the border and took it home with them. Sarah grew so quickly attached to it that she actually allowed it to sleep in bed with her that night, before taking it to the vet in the morning. It was then she discovered that it wasn’t a Chihuahua at all. Rather it was a Mexican desert rat with rabies!* 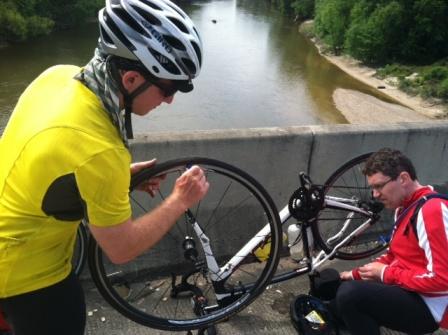 We stopped for lunch just as Jeff’s back wheel gave him renewed problems with a spoke breaking off. It took quite a while to sort out. After food, we got back on the road only for him to have a puncture after two minutes, and then another one two minutes later. The poor guy was really fed up, but only for a few minutes because he’s probably the most jovial man on the planet. We had to wait for the RV to show up again, and I lay down on the warm tarmac for a breather, only to find that the next I knew of it was when I woke up and everything had been sorted out – a reflection of how exhausted I am. 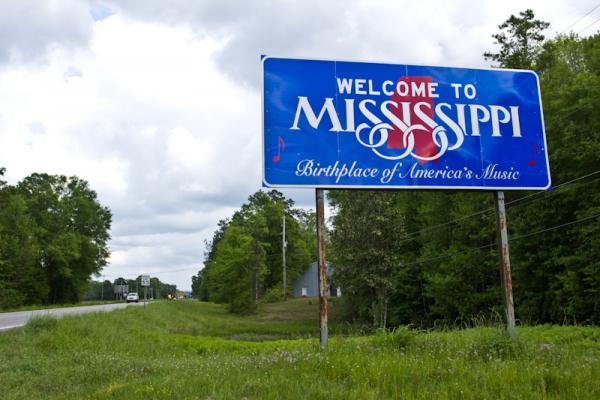 The last forty miles were difficult for me with my knees telling me they’d long had enough. We were by this stage in Mississippi, our sixth state. Most houses seem to be pre-fabricated portacabins from what we’ve seen so far. Mississippi is the poorest state of all, and people don’t seem to have much positive to say about it. We soldiered on until we’d completed 110miles, meeting Craig’s parents shortly before we finished, as they’d flown out to be a part of the latter stages of our adventure. And now we are being hosted by Steve and Tania and their forty six cats and dogs. They really put in a special effort to line up an authentic Mississippi meal for us with crawfish, which you eat by yanking bits off and slurping the flesh. As I’m allergic to them, I’ve just watched the others try to eat them with zero finesse as it seems a sophisticated art. I’m sure my hosts would have liked me to partake, but I would have barfed (my favorite US word) all over the table so it was good I refrained. Tania said she’d like to do some work overseas… “so long as I can take my donkey with me!” They are very different from Ernie at Mexico Hill Ranch from a few nights ago, but unique in their own way, which is part of the joy of hooking up with new people who all have a different story. Sadly I felt too out of it to really engage and stay up late talking, which certainly would have been entertaining.

I’ve rattled this off, sorry for its lack of coherence, but I’m dead beat and in need of rest. Here’s hoping the knees hold. We’ve completed 22 of the 30 actual cycling days, so only 8 full days to go on the road. See you tomorrow.

* OK, that’s not a true story, it’s an urban legend, but today was pretty dull and I did think of that story when the pathetic Chihuahua came running towards us!