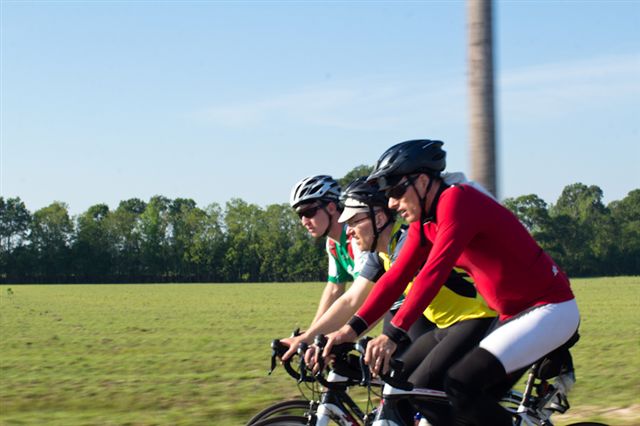 I might be emotionally unaware or insensitive, but had you asked me yesterday about team dynamics and how things were going, I would have given an unequivocal shining report about all things having been sweetness and light amongst each one of us over the last three weeks. The fact is, with all of us extremely tired, living in close quarters, and not getting as much sleep as we would have liked, you would have expected a few decent humdinger rows by now. Well, last night John asked me for a quiet word. He raised some issues that had been niggling him for some time. Most of them were very easily dealt with and arose out of misunderstandings and miscommunication. But if we don’t address them, they lead to resentment. So it was great that he did – he’s a rock solid guy. I apologized for my shortcomings and that was that, nipped in the bud. Sorry there’s no more salacious gossip or slander to share to spice up the narrative. I’ll work on it, but we’ve only got twelve days left to fit one in before we go our separate ways.

We had a late start because of having done so many miles yesterday, and being in Louisiana’s no.1 RV park for the princely price of $20 for the night. From hereon in, by the way, take it as a gimme that it’s plain hot and humid.

So we are in Cajun country. Cajuns are descendants of French colonists in the 17th century who settled in Canada in a region they called ‘Acadia’. They got a lot of rough treatment as France and Britain vied for supremacy in North America, and eventually settled in Louisiana from 1785 onwards. With time their new neighbours referred to them as ‘Cadian’ which eventually became ‘Cajun’. But if you have any association with the word, it’s probably to do with cooking, popularized only from as recently as 1980 by French chef Paul Prudhomme when he created an instant classic with his blackened redfish. So, that’s a brief summary in four sentences of what you could read in many books. I asked the lady at the Chevron station how she’d describe ‘Cajun’. “Hmm… let me see… it’s road-kill food, they’ll take anything, put lots of seasoning, eat the whole thang.” We’d passed through towns with French names like Platteville and Moreauville (my sister Tracy’s best friend when we lived in France as children was called Christine Moreau – maybe her ancestors?), so I asked how pervasive French still was. “My grandparents use it to each other, but my generation and below don’t speak it.” Interesting. 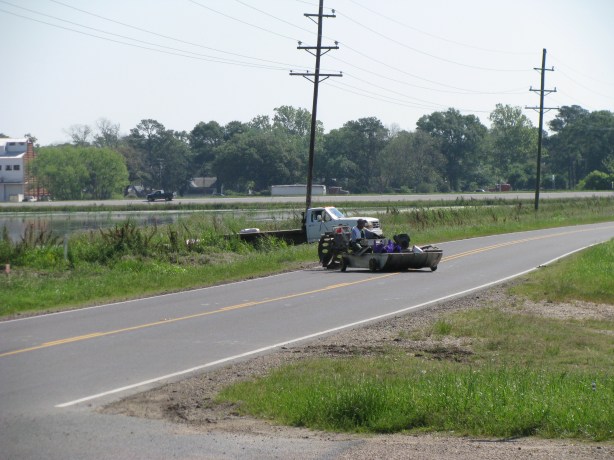 The morning ride was full of fun and laughter. Having shared war stories last week, today we did Dr. Lurve stories, going through our past conquests and sharing some funny moments, and some more serious ones. I was relieved that all the girls I loved, spent any time with, and sometimes didn’t handle very well, are now married to hopefully Mr Right as opposed to me, so my potential feelings of guilt can be assuaged and replaced with vicarious joy.

Over the last few days, we’ve cycled past many a mushed turtle, but today we came across a decent-sized living one slowly clawing its way across the road. This was right up Jeff’s street. He went into David Attenborough mode, picked it up (it promptly did a ginormous pee), observed it: “This is a red-eared slider, so-called because it has red ears and slides off surfaces easily.” Craig meantime was getting hot under the collar at Jeff’s perceived manhandling of the helpless turt: “OK, that’s enough, let it go, leave it alone!” “No, I’m just looking at it, it’s not a big deal.” So I watched this hilarious interplay between Craig the tree-hugger’s loving advocacy for the emotional rights of this unfortunate reptile and knowledgeable Jeff’s rebuttal on the grounds that reptiles are amongst the lowest of the species with no feelings whatever. It might have come to fisticuffs and team schism, but the matter was settled with turt being put back down on the ground to got off on his traumatized way. 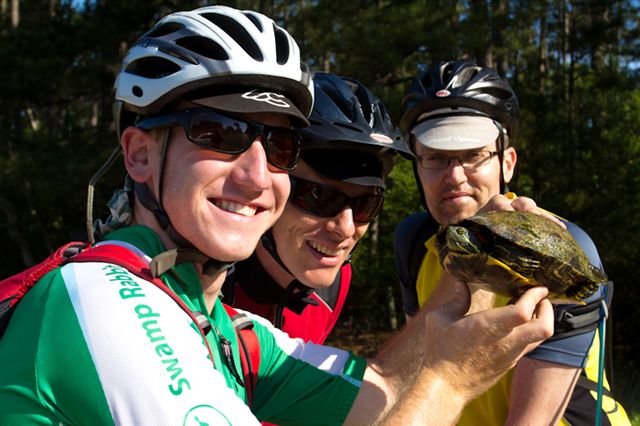 We passed lots of crayfish farms growing in rice paddy fields, and came across some more road-kill. Jeff exclaimed: “Dude, look at that nasty jacked-up raccoon. Gnarrrrly!” Craig and I looked at each other, one of those quizzical acknowledgements that we can’t possibly understand such US English. Then Craig corrected him: “The word ‘gnarly’ can only correctly be used in relation to trees!” What with so many marshes, there were lots of dead snakes on the road as well.

As we took a team leak, Jeff continued to educate us: “See those? They’re Chinese popcorn trees. They require way too much water, then they grow fast, edge out the willows, and dry out the wetlands. That one there is called a resurrection fern. See how shriveled up it is. It can go without water for months, and looks like it has died, but then comes to life immediately when the rains come.” He’s interesting, our Jeff. Actually, we now have a nickname for him. We needed one before when other Geoff was with us, but never found one. Well, Jeff is just like Samwise Gangi – he is short, stocky, has big hairy feet, and is both incredibly loyal and encouraging. Some might say the real Samwise is not the best looker, so let’s not take it too far, but Jeff/Samwise is secure in his looks, so that’s OK – unlike me at school when for a while they called me ‘Yoda’. I never liked that.

We went a little wrong today and did a few extra miles – which isn’t a bad thing because my mate Paul is sponsoring me $5/mile, so we might get lost a bit more often! We crossed over the 2,000mile mark today (that’s $10k, Paul!), so things are going well. Entering Bunkie, we went past the Elementary School. It was recess and all the kids were out playing. I didn’t see a single white face. A bunch of 9-ish-year-olds watched us over the gate, and one called out: “We want to be dressed like y’all!” Maybe it was meant as an innocent compliment or maybe it was a barbed comment, but either way it provided further affirmation of how effeminate we look, that a little girl could want to wear our manly tights – surely not!

Maybe having aired one prejudice yesterday, I’ll come up with another. We came to a Shell station with a promotional offer ‘Fat Tuesday – Premium Dairy Ice-Cream’. Many people gathered there has girths at least three times mine. We’d cycle past rotund folks rocking on their porches observing the scenery or texting away on their phones. Obesity is a pandemic of the 20th and 21st century, and so many people here are simply texting too much whilst eating fatty Premium Dairy Ice-Cream. Come on people, get off your backsides and save your lives! Maybe it’s easy for me as a skinny runt married to a skinny waif to say so, as it’s clearly not one of my issues. I met a skinny man at the weekend in Houston (2nd worst city for obesity in the States) whose brother had just died, weighing 500lbs/36stone! Tragic! And it’s all the more a sign of how messed up the planet is when huge numbers of people in the West are dying of fatness whilst tens of millions of people in places like Burundi are dying of thinness. I sat next to a man on a plane to Chicago once. He was enormous. He snored so loudly people several rows away caught my eye and rolled theirs. Three hours later he woke up, and I said to him, somewhat nervously in case he punched me in the face with his supersized fist: “You know, I’m only saying this because I care, but if you don’t shape up, you’re going to die.” He couldn’t believe it! We actually had a really good chat, so if you want to accuse me of being fattist, then OK, but at least I’m a caring fattist!

Over lunch, we were so wearied by the heat that both Samwise and I fell asleep. Craig was also quite dehydrated because his arm is so sore that he neglected drinking because it hurt him simply to reach down and pick up the bottle from his bicycle frame. But we had to keep going, so on we went. Samwise nearly got hit by a bus at one stage, maybe because his feet stuck out too far, but he’s a nifty cyclist and weaved his way to safety. We had another dog attack, which is always fun. I reckon maybe they win one in every thirty attacks, and we’re on about twenty five so far so we’re due a defeat imminently. But the thing is, you just have to cycle faster than the bloke next to you, and if you do, then you have the great pleasure of enjoying watching their terrorized eyes and panic-stricken feet pedaling furiously away. Friendship can only go so far, so no hard feelings, Craigus!

Anyways, as the shadows lengthened and we came towards the end of the day, we passed by two isolated fields and suddenly there was a ‘whoosh’ as thousands of birds darkened the sky – beautiful. We finished on 108miles, and they really felt hard-earned today. It was a long slog. We’re now in a nasty cheap motel, the grimmest I’ve seen in the USA, but at least there was hot water for a shower so we’re clean and ready for bed. Goodnight!