When I said goodbye to Geoff last night, he thought he was going to die. It turns out he had had, according to initial tests, a heart attack. What?! His family were flying out, and he said to me he wanted to see them one last time. Sounds dramatic, doesn’t it? But Geoff’s no drama queen, I assure you. That’s how bad things looked.

We left to find an RV park on the Colorado River, to get some much-needed sleep. A couple of hours later, Geoff was medically evacuated by helicopter. Dad, who has joined our crew for the first week, was a legend in helping speed up proceedings, looking after Geoff all the time at the ER, etc, but they wouldn’t let him go on the helicopter, so David, our documentarist/videographer, had to drive him the two hours to Palm Springs’ specialist cardio unit, and then get back at 4am. Wow, every member on our team is playing their part!

Meantime, I had a terrible night. Sleep is crucial, along with the right food, to last these endurance challenges. Well, I was awake from 2am with a headache and thinking about Geoff, Michelle and their boys, Jake and Luke. My headache might have been caused by dehydration although I drank 14 bottles of water and/or Gatorade yesterday. So I drank two more, which meant countless trips to the loo until dawn. There was a sombre mood in our camp as we thought of Geoff and hoped he was going to be OK. I forced myself to eat three breakfasts in one, because it’s so hard to get in the required 6,000 calories a day, and it meant that I wanted to vomit for the next hour or so.

Off we set at 730am. When you’re aiming for 100miles in a day, starting at 6mph because of a nasty headwind is very discouraging. That meant very slow progress through until lunch. At one point, I was deep in thought, plodding along, with the other two discussing directions, when suddenly two massive fierce repulsive mongrels out of nowhere ambushed us in a cunning pincer movement. They both started on me, and I was able to kick one in the mouth as he tried to bite me. So he beat a hasty retreat, and the other one moved on to Jeff. It was very funny retrospectively but we were semi-traumatised at the time, and it took a while for the adrenaline rush to subside. We then crossed over the Colorado River from California into Arizona, so that’s our second of ten states on our journey. 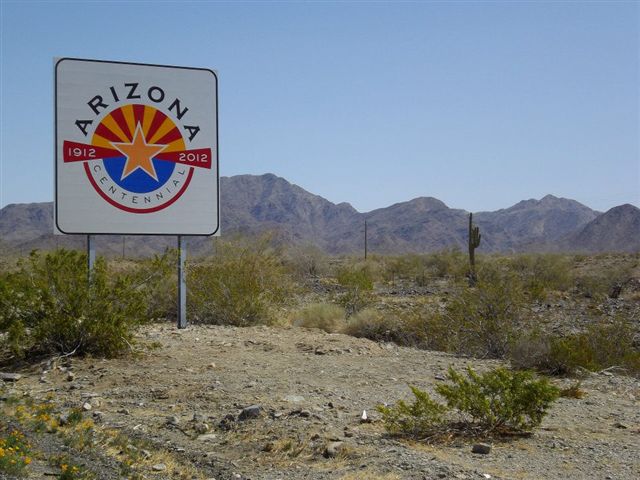 
There’s not much else to report on the ride. I think I’d review today as a little discouraging. We only made it to 80miles because of the wind, but also because of my knees. Craig and Jeff, who are both fit and strong, could comfortably have done a century, but they patiently allowed me to dictate the pace. They don’t put any pressure on me at all, which is a real relief. It’s a difficult one for me because if I push it, my knees will give way and my cycling will be over; but the fact is we simply don’t have much time to play with, so we need to push forward. Anyways, I had a puncture just a few minutes before we were due to call it a day, which was the best timing possible, so we packed up and drove a fair way to a house that has been made available to us, from where I’m writing now.

And then we received the best news imaginable in an email from Dad: Geoff’s in the clear! In fact, it turns out the ER guys in Blythe misdiagnosed, and his heart’s fine. His real issues were a combination of dehydration and sleep deprivation from the jetlag. We gave a corporate whoop of delight, because it means he’ll be able to rejoin us in a few days and slowly build up the miles again. And then John, our driver/chef/masseuse/cleaner/logistics guru came out with a line that left us in stitches for several minutes: “You mean to say they evacuated Geoff by helicopter for sleep deprivation?!” I think we laughed so hard because it was such a relief and unexpected bonus that our buddy will be back. Brilliant!

Tomorrow’s going to be a long day. I’ve already made it further than I thought I would because of the knees, so we all (including and most especially Geoff), live to fight another day!