Nobody would have guessed how today would pan out. It’s been a very memorable day for the wrong reasons this time.

It took us a long time to get away. I’d been up since 4am. The views outside under the stars were amazing. Actually it had taken a while to get to sleep because of my sheer elation to have made it through yesterday. And then I had to contend with Geoff’s snoring, closely followed by John’s, and then Craig’s, all distinctive in tone but equally effective at keeping me awake for a while until the sheer exhaustion kicked in.

We had breakfast with the other team, and then drove off to our starting point. Geoff was stiff obviously exhausted, with a clanging headache, and looked like death warmed up. We thought we’d have the winds with us, but actually they didn’t help much in the morning, but there was plenty of downhill so we made good headway. The sun got hotter and hotter, and it turned out to be the hottest day of the year so far.

By our first stop, Geoff knew he needed treatment. Dad rang the pharmacy and they said it sounded like he had heat exhaustion and needed to get off the road. We had this horrible conversation on the side of the road, essentially telling Geoff that he couldn’t go on, that his ride today was over. He cried, and I cried too. I so understand his emotions, and had expected it to be me who was forced to quit first. All those hours of training, all that money invested, all those people praying, and the significant sacrifices of loved ones. I was so gutted with him. He cried out loud to God. We did inside. Gutted.

Just at that point, crazily, some Aussies drove past in a support car for a man who was running around the world! They stopped to see if they could help. The crazy man’s going for a Guinness Book of Records, good luck to him, www.tomsnextstep

We got to the next town. The RV was waiting for us. Geoff got some ice on his head and went for a lie down as we followed the pharmacist’s instructions. Heat exhaustion needs rest, or it can lead to heat-stroke, which can easily be fatal. So we couldn’t mess around with this. Geoff was so desperate to carry on despite the pain, that he pretty much bargained us into giving him an hour to see if he’d recover, however unlikely. When that hour had passed, he knew he was finished, and in fact was getting worse.

So Craig, Jeff Junior and I got back on the bikes, knowing we had a long way to go and time to catch up. I’ve never been so grateful for a strong tailwind for the next four hours, which enabled us to blast along comfortably. There was a dairy farm we went past which must have been one of the biggest in the world, with cramped cows lying on the ground or sheltering under the solar panels as far as the eye could see. One of them was shot as we whizzed by. We were now back in amazing desert landscapes, and the wind picked up further. Visibility was vastly reduced as it turned into a mini-sandstorm. One time when we stopped for a pee, it blew right back at us and over our bikes – nice! It was a race against time in that I was due to speak to a youth group that evening in Blythe, but I didn’t want to push my knees too hard. I’m surprised they haven’t given in already, to be honest. I calculated on one stretch that I didn’t need to pedal at all for five straight miles because of the wind. We bypassed the Chocolate Mountains, so-called because they are somehow dark brown. Anyways, we did 107miles in all, absolutely shattered and further weakened by the relentless sun. But we made it in time, only to get news that Geoff was in hospital. 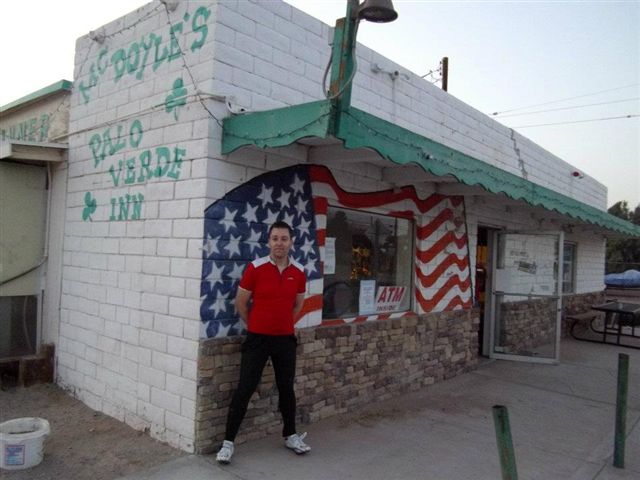 I spoke to the youth group, having cleaned out my ears of accumulated sand, and done a cursory wet-wipe wash to look half-decent, but I’m quite sure they’ve never had a more filthy speaker grace their building! And then I came out to receive some shocking news. I won’t go into the medical details, but it wasn’t heat exhaustion after all. No, it’s serious enough for Geoff to need urgent moving to a heart-specialist unit in a hospital far away (OK, at the time of sending this, we are now waiting as a new doctor has ordered another round of tests, but there’s nothing we can do and we need to get some sleep as it’s getting late and we have a 6am start). His wonderful wife Michelle and two boys are flying out as soon as possible, and hopefully all will turn out OK, but it is very concerning, and he’ll hopefully be flying back to the UK as soon as possible when he is deemed healthy enough to do so. So sad.

It’s a huge blow to all of us. We’re shell-shocked. Geoff is the reason we are here. A cycling fundraiser was his idea. He’d done it for our orphanage several years ago in the UK, and in fact it was his cycling Land’s End to John o’ Groats (top North East to bottom South West of the UK) that clinched the land for us, because the $65k raised through his efforts with two others, enabled us to put up a few dormitories before the land could be reclaimed by others in authority who might want to use it (in Burundi if you don’t build on land within a certain time-frame, it gets taken off you and sold to someone else who can). I, and many orphans in Burundi, owe a huge debt to Geoff. He is a close brother, one of my favorite people on the planet, whom I respect so much, with his precious family. They love the truth enough to live it. Words and actions go together with them. They don’t just talk a good game, they live it out. You know, he was a lion of a man today, soldiering on through unbelievable pain, and only stopping when we forced him – a real warrior. So Geoff Morris, we salute you brother, and will be praying for quick recovery.

More news will follow as and when we get it.