Last night I ended up speaking at two meetings. We were hosted by this superb lady Kelly, who had been at the Citadel (military school like Sandhurst or West Point) with both John (driver) and Olivia (who is GLO National Director in Burundi right now filling my shoes). In fact Olivia had had a massive influence on Kelly’s life at the Citadel, and now Kelly is a similarly impressive lady, recently back from a tour of duty in Afghanistan, passionate, focused, generous, a go-getter, etc. So she had fixed us up to speak to these two groups, and food was lined up, and she’d even gone the extra mile in baking us home-made energy bars and sending us off with breakfast at 515am. What more could you ask for?

We had a 60mile drive back to the start of our route, because we are making such good progress and are ahead of our planned pace. The wind was with us, but at the beginning of the day my knees were really dodgy, so we began slowly, and I was having horrible thoughts creeping back into my mind that I might not be able to make it. At one stage in the corner of my eye I saw a ball of fur moving behind the brush parallel to us, and presumed it was another dog on our tails. But if it was, it would have to be a lardy one because it was almost as round as it was high. Then it burst through the undergrowth and shocked us in our tracks because it was a wild boar/warthog-type creature.

A lot of today was spent on Interstate-10 (the equivalent of a motorway in England, and just a few States allow cyclists on them here). We crossed from Mountain to Central Time Zone. A week ago we were in Pacific, then Arizona (one of only two States that never changes time), and in the mix there was daylight savings time change with clocks going forward, so we’re all a bit confused, in that we’ve experienced four time changes as we’ve covered these last several hundred miles by bike.

The sun was out, but not as brutal as other days, and we enjoyed clouds in the sky providing further protection. When Jeff was rubbing sun-cream into his face and ears, I remarked: “Wow, you really have quite decent-sized ears, don’t you?” John guffawed: “I love the way you Brits disguise your insults in such polite language!” I was actually genuinely admiring his impressive pair; and then as we cycled along (you have to understand, we have hours to kill, sometimes in silent reverie, sometimes talking banalities, sometimes even going deep), we shared some of our war stories. Mine were pathetic next to Jeff and Craig’s. I could only muster up tales like breaking my Mum’s nose with my baby sister’s face, whereas they had incidents of stabbings, fractured elbows, and coincidentally, both had smashed and multiply-shattered noses, Craig by hockey stick and Jeff by titanium lacrosse pole! And I was cycling alongside them and had the perfect view of the outline of their uncannily similarly shaped noses! Anyway, Jeff took the prize with his story which began: “So one time at the ice-rink I got my balls split open…” Oh dear, I’m still struggling to recover from his gruesome tale but there’s a happy ending and he’s back to full throttle. If you want the full story, you’ll have to get it from the horse’s mouth (no, that’s not an oblique reference to his big ears again), so contact him directly for the full (painful) scoop…

Texas, Texas, you are so vast, and it’s only Day 2 of our penetration into your cavernous belly. There are roads here, which I suppose are very standard and common in that they are straight as an arrow for tens of miles – well, there’s nothing like them in Europe. The trains sporadically passed by, and likewise there’s nothing like them in Europe, with carriage after carriage by the hundred all attached together, maybe a mile or two long. And be it the train drivers or the 18-wheelers on the interstate, many would honk or toot and wave us along encouragingly, probably thinking what daft nutters we are to be cycling along in the middle of nowhere apparently on the way to nowhere. 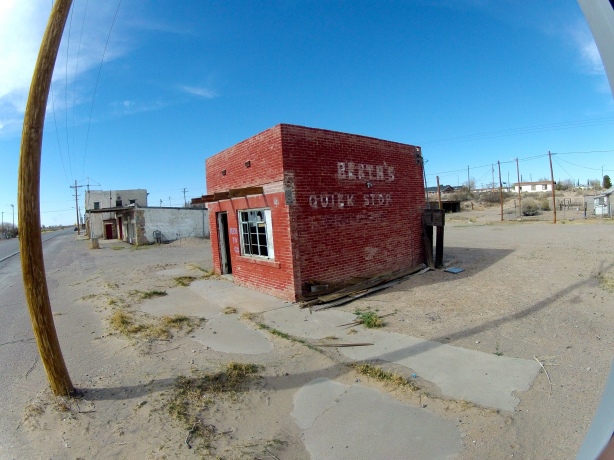 We came across a pecan tree plantation that went on forever – yes literally – well almost. And lots of cows, as we know Texans love their meat. Craig as a vegetarian has been struggling enough, but in Texas, you have to have sirloin steak in your cereal for breakfast. Actually, our new friend over supper told us that her husband had started a vegetarian club and actually received anonymous death threats on the phone, including the line: “We don’t want the likes of you in this town!” We’ll protect and look out for you, Craig, I promise… at least until we get to the meat-only restaurants and then you can wait outside. 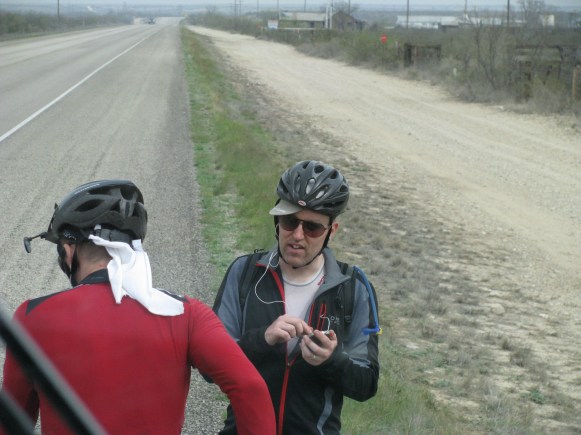 Towards the end of the day, we came across Simon Matthew (‘Smat’) and his little terrier, Raisin. Smat was cycling with a carriage in tow, which included tent, belongings, cooking stuff, and Raisin’s cage. They were homeward bound on a several-hundred-mile journey. He is a travel-writer/story-teller/journalist, and we journeyed with him for a while at 6mph, enjoying slightly more erudite and enlightened conversation for a change after our puerile discussions à trois. The funny thing is that with Raisin in the cage, when dogs come to chase them down (which is our perennial concern), actually the oncoming attacking dogs get totally freaked out when the weird-looking moving bicycle-cum-carriage barks back at them! 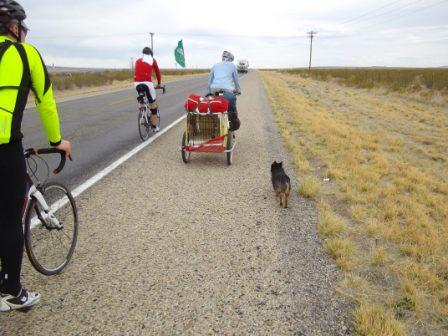 The surreal experience of the day belonged hands down to Prada: we were cycling along that loooong straight road. There were no signs of humanity at all. And then, IN THE MIDDLE OF NOWHERE, we came across an isolated one-roomed building with ‘PRADA’ emblazoned across it, shoes and such like in the display window. It must have been a mirage. But we all saw it. And it really was there. Nuts. 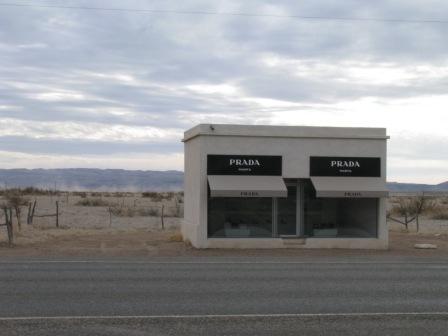 At 103miles, we called it a day in a ‘town’ called Valentine. We’d cycled past a number of ghost towns – dilapidated buildings of yesteryear – and this was another one, although apparently it has a population of 217. Well, I didn’t see a single human being, but there was a truck parked outside a slightly rickety house. The ideal scenario would be that the owner of the house had internet access and would let us just park the RV outside, so that we could sleep there, get this blog post sent off (I try really hard to get this out every night as payback for all you wonderful supporters thinking of and lifting us up, but I tell, I feel so knackered every night, it takes a humoungous effort!), and then depart from the same spot tomorrow morning. The alternative was a half hour drive to an RV park which would mean that same half hour drive back the following morning, losing us precious time. So I plucked up the courage, walked slowly up the echoing steps to the front door, not with cowboy spurs but instead with clumsy cleats, and timidly knocked on the door, half expecting some wild-looking eye-popping reclusive maniac to burst out brandishing a shot gun in my face. And sure enough he did! No, just kidding. Slightly anticlimactically, nobody answered. I’m sure he’d seen me, but as Craig observed: “There’s a reason some people live in places like this, to get away from people like us!” Fair point. And any Texans reading this, sorry for reinforcing any negative stereotypes, you’ve been the friendliest drivers of any State we’ve been through so far.

OK, over and out. A very good day. Knees held, good mileage, fun chats, cooler weather, no sewage problems. What more could a man ask for?