Last night we found ourselves in Katy (named after my sister), which a suburb of Houston. After completing yesterday’s ride, we had a two-hour drive here, as we had gone so far past our planned stop (wanting to get some contingency miles stored up in case of anything going wrong – and plenty has gone wrong so far to keep us on our toes). John as driver brought up whether we should just stay at an RV park for the weekend to save on fuel, and I guess on his energy, but I thought having two nights in decent beds with hopefully kind people and nice food was worth the drive. Well, the drive could have been the end of my trip. I was in the far back of the RV, lying down on the double-bed and catching up with some emails, when John drove very slowly over a railway line. I guess there’s a reason why it might be illegal to be in the back when traveling, because the leveraged bounce at the back from an unsuspecting dip in the road literally flew me five feet in the air, just missing the ceiling, with my laptop and ice-machine for my knees – it was cartoon-like, as if we were in space for a split second, before we all crashed back down. I hurt my back a little, feared that my laptop was bust, and took the hint to move up to the table nearer the front where minor bumps remain just that, minor bumps.

When we found our hosts in Katy, we knew it had been a good decision straightaway. David and Rebecca are softly-spoken and incredibly generous folk. David built up a very successful construction firm and wound it up in 2007, just before the economy went belly up. He’s a well-known man of integrity in the city, influential, connected, but beyond that simply a top-quality bloke. Their palatial seven-bedroom house was a beautiful sight for sore eyes, and the Jacuzzi an incredible bonus for sore muscles. We ate together, had a swim, and went to bed very content. 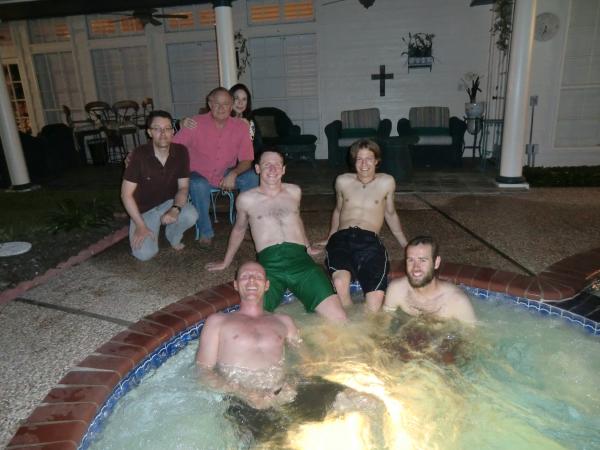 In the morning, I got a message from Michelle, Geoff’s wife, to say that he was back safely in England having been upgraded on the BA flight across the Atlantic. Get well soon buddy! Basically for all the team except me we were able to make today a complete day off. Well, they all had stuff to do like emails and downloading photos, etc. Craig discovered that he’d been the victim of £6,000 worth of credit card fraud, which was the last thing he needed. The others lay in whilst I borrowed David’s truck and headed across Houston’s extraordinary spaghetti junction network of roads to give a talk at Clear Lake. Thank God for GPS because otherwise I’d still be out there somewhere looking for my destination. I had a great time with some folks there, before heading back to rejoin the team.

David and Rebecca returned from their church, Second Baptist Houston, which has – wait for it – 50,000 members. I kid you not! He’s a deacon and had a deacon’s meeting. I asked him how many deacons there were, expecting to hear a dozen or so. Guess how many there are? 800! I kid you not again! They invited us out to lunch at the prestigious Houstonian Country Club with friends of theirs, Jim and Bonnie. Jim, now a retired judge, had stood for Congress in 2008. He was a real character, as was Bonnie. So we had a gorgeous buffet in this plush venue with very impressive and successful people and we were all left wondering how this had come to be. We’re just a bunch of sweaty cyclists crossing the USA! The connection that led to us hooking up was so tenuous, and testimony to these folks incredible generosity to host us random punters. Their son and daughter-in-law had worked for the Bush administration, she as the First Lady’s personal trainer!

Rebecca then kindly drove me across town again to another meeting which also went well. It did mean, however, that I spent about four hours driving today, and so I don’t feel rested. Added to that the fact that this is the main day to catch up on GLO business and emails, so I’m just hoping that as I go to sleep now, I’ll get some good hours in the bank, all the more as we are getting up to leave at 5am. So we’ve all just been in the Jacuzzi, and have had a team picture with David and Rebecca. I haven’t told you all the gestures of generosity they’ve made towards us, but suffice to say it has been overwhelming, and a real tonic to us in our battle-weariness.

David (videographer) has now rejoined us, having spent 10 days away actually making some money for a living as opposed to working for us for nothing. We married men had agreed (or so we thought) with him before he’d left us that he’d maintain a solidarity pact whilst back home similar to the honorable Uriah who refused King David’s urgings to go home to his wife whilst his men were fighting at the front. Well, enough said. We forgive him because his documentary sample that he’s put together is simply stunning (if you haven’t seen it yet, see yesterday’s blog link). It’s great to have him back.

As I look ahead to this week, it’s pretty daunting. In the last couple of days, the temperature has ramped up significantly, particularly also the humidity. We will need to average 109miles every day. There’s no time for slip-ups. We need to just churn out the miles. My knees gave me some real warnings at the end of yesterday’s ride, so I can’t push it as I thought I could. I’ve slept so badly all trip, so am hoping for a few more hours each night. We’ll see. I never thought I’d have lasted this far because of the rickety knees, so I’m thrilled to still be in the fight.

So bring it on! And you have a great week!