I remember a terrible film in the ’80s called ‘Ernie Goes to Camp’. It was meant to be a comedy but was simply dire. The makers of that film should have spent some time with this Ernie, our host, because he is hi-la-rious. He’s got ideas coming out of his ears and is like a little boy without a filter between his brain and his mouth. He knew we had to make an early start, so he arrived at dawn, bringing with him a few gifts. The conversation went like this (and to really get into it, for Ernie you need to put on a deep full-bearded Texan accent):

Ernie: G’morning guys! I brought you a goose egg – ever seen a goose egg? Real big. And here, some Mexico Hill Ranch drinking mugs so you can promote me around the world. Do you want me to take you out in the truck to track down those howling coyotes? Oh no, actually, my truck’s full of gear. My precious Friesian died last week, real sad, so I put her corpse out behind the shed and those coyotes are having a good time.

John: Thanks for the mugs. I bet you do T-shirts too!

Ernie: You’re right! Hang on a minute… (goes off to fetch them, comes back a few minutes later). Here you go!

Simon: Do you ever take a break?

Ernie: You bet! I get in my truck and cruise wherever, I’ve got friends all over the world.

Ernie: Hell no! She’s got to feed those damn cows – that’s women’s work, you see?! Those two donkeys over there – we wanted to see the birth real bad. We even went out during the night to watch their Mama. But Friday morning we came out the house, and there was the first one, so he’s called Friday, and then same thing Sunday morning, there the second one lay, so we called her Sunday.

And on and on he went, turbo-charged with energy, enthusiasm and vision for Mexico Hill Ranch. It’s interesting because that’s always been something that’s struck me in the USA. Nobody does customer service like Americans. They are the best – they make you feel so valued and special, most of the time. The French could learn a thing or two, and Burundians have taken customer disservice to another stratospheric level altogether (don’t you love generalizations?!), which we are trying to rectify with our own King’s Conference Centre in Bujumbura. But Ernie was simply in a different league, it was pure service because he loves life, people, his ranch, his wife, and blessing others. So here’s a plug to all Southern Tier cyclists, stop at Mexico Hill Ranch in Richards, and stay a few days if you can, because you’re sure to have reams of bloggable material and lots of laughs in the mix (I only spent ten minutes with him)! 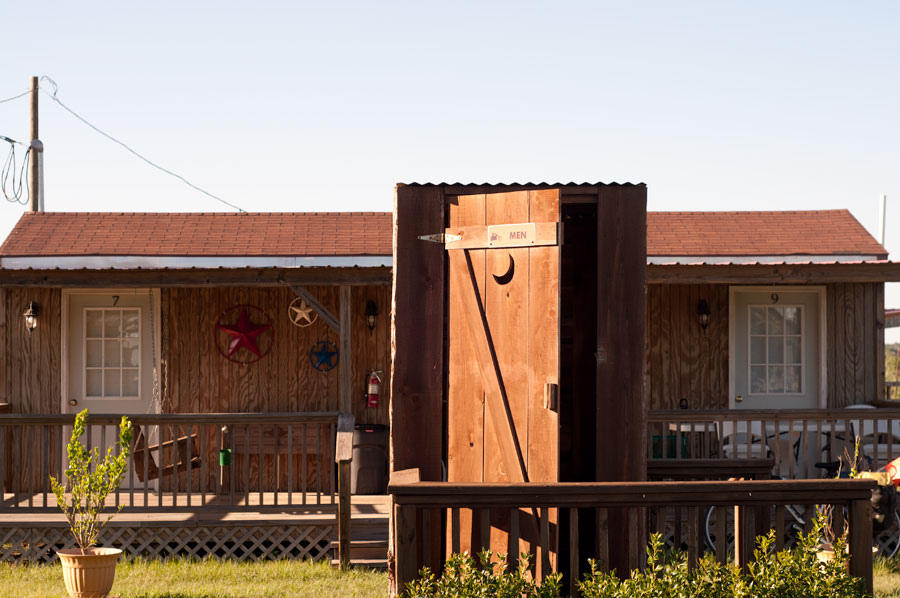 We feared not being able to get away from his enthusiastic clutches, but after a team photo like we’d been buddies for decades, they cheered us on our way, with Doris’ parting shot: “Next time you want to wrestle cows, you know where to come!” Outside his home-made pub, there’s a plaque that reads: “Some visitors are a blessing by their coming… and some are a blessing by their going!” I hope we’re considered in the former category.

On his comment about women’s work, I’ve got my own opinions: women will only ever be equal to men when they can walk down the street completely bald and with a beer gut, and still think they’re sexy! (Before I left, I wrote thirty five short letters to Lizzie, one for each day of my absence. Each note contained a funny one-liner, an encouraging verse, and then a little personal lovey-dovey bit. The above was one of the one-liners!) 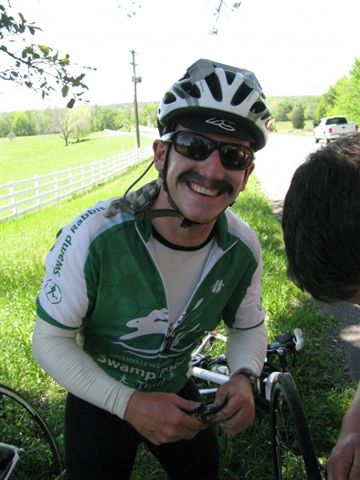 Anyways, back to the ride. I think we’ve been through the worst now in terms of desolate wasteland, deserts, and nasty mountain climbs. Today was 101miles of pretty flat and easy terrain. But an easy day doesn’t mean it was short on drama. Jeff’s chain caused some problems (actually he was on other Geoff’s bike, because his own bike needs fixing as soon as possible), so we stopped off to work on that. He then smeared his upper lip with oil from the chain which made him look like he belonged in the Blue Oyster Bar, all the more with his effeminate lycra leggings, à la Village People singing YMCA. But then within a few miles, as I followed five yards behind him, we were beginning to go uphill when his bike jammed, he skidded, smoke came off the road, and he managed to stay upright somehow. We couldn’t believe it when we looked down at the frame. It had snapped. This is a $2,500 bike, and it was totally wrecked, game over completely. Once we’d recovered from the shock, there was nothing else to do but change saddles, cleats, and get out our spare bike. Some of you will remember the amazing provision of an extra bike when we flew into Los Angeles and bumped into a man having a yard sale who donated his beautiful high-quality bicycle to our cause. Bob McManus, you can’t imagine what a blessing you’ve been! Jeff’s bike being out of action as well, and we being far from anything, Bob’s bike meant total crisis averted. 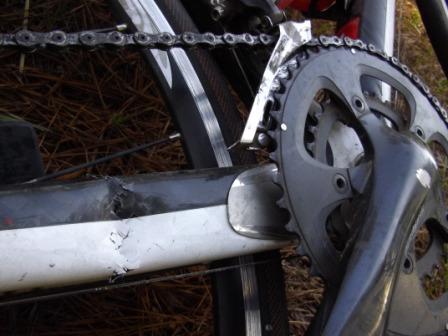 It was pretty all day. We went past picturesque lakes with fishermen casting their lines in the still waters. We had shadows over us much of the time because of tall pine and gum trees lining the way. I nearly swallowed a butterfly as it flittered into my mouth. Craig had a ladybird(UK) / ladybug(USA) nestle on his arm for 60miles, so it must be traumatized right now as it is so far from home. Strangely there were lots of crushed turtles strewn along the way, and Craig rode over a live (now dead) snake whilst I had one rise to strike me as I flashed past (‘flash’ used in that context meant speed as opposed to nakedness – the team withheld information from me yesterday because there had been an option to stay at an RV park whose dress code was ‘clothing optional’, i.e. a nudist RV park, and they thought I’d insist on staying there! But it was $100/night, which was prohibitively expensive. Maybe another time…!).

We had two dog attacks. The first one was bizarre. I heard a lady showing: “No, Butter! No, Butter!” and thought that maybe it was just a case of a seriously vocal marital dispute on the contents of today’s sandwiches. But the hollering became more heated and urgent, and as I turned, I could see this beast hurtling towards us. It was half Alsatian, half Doberman and half lion (I know that makes one and a half, but he was that big, mean-looking, and fast. We had a 300-yard head-start across their extended front lawn, but he nearly caught us. Phew! The second one was traumatic for the sheer ugliness of the mut that bounded towards us. Jeff said: “I didn’t know we had hyenas in America” – that’s how ugly it was, but we were able to make a quick escape.

When you’re riding for hours on end, your mind flits to all sorts of memories. So when he mentioned hyenas, I thought of the time I was in Ethiopia in 1997. We drove three days solid across from Addis Ababa to Harar – all because of the Hyena Man. We tracked him down, having read about him in the Lonely Planet guide, and we followed him to the extremity of the city. There we sat on the ground next to him at dusk as he hauntingly coaxed the ugly beasts out of the shadows of the city’s rubbish dump, drawing them progressively nearer until they snatched morsels of meat from next to our feet, and, even more exhilaratingly, from his lips as he unwaveringly dangled a piece before these instinctive killers. Nobody dared move, yet he seemed very relaxed. The tension in the air was palpable. We left him with a sense of reverent awe. But a few years later, a hyena worked out that he tasted even better than the meat dangling from his mouth, so he came to an ignominious end.

Anyway, back to the present, for some reason today we came across many other cyclists doing the same or at least a similar route. I so admire people who do it solo, because it must be so lonely. There are pros and cons of doing it alone or in a group, but for us as a group, it means constant company, banter, laughter, support, etc, and there is always the encouragement that one of the others has a more bruised backside, more extensive fungal growth, worse sunburn, headache, allergy or whatever!

We’re really trying to save as much money as possible so that the maximum goes to Burundi. So at lunchtime I enjoyed the same leftovers from New Braumfels for the third day running. It tasted so good. Anything tastes good when you’re doing what we are. After lunch we had our only negative encounter of the day as a truck driver blasted past us and extended up the long middle finger of fellowship. Then we came across a statue entitled ‘The Christ of Texas’. The figure in question had extended arms, and basically looked just like a clean-shaven Texan! It made me think back to my anthropology and Christology classes at All Nations where we observed how all cultures tended to make Christ in their own image. So you had a black Christ in Africa, a freedom-fighting Christ in Latin America, a Klu Klux Klan Christ, and so on – none of them the correct one. Sadly whatever culture we come from, we’re influenced and dragged away from the authentic Christ – the first century Jewich carpenter whose radical teachings, miracles, denunciations of the status quo,etc turned the world upside down and from whom our very calendar derives its dating. That Christ is definitely worth checking out in detail if you haven’t yet in any depth and with integrity, because he might – as he has for me – totally rock your world.

We knew we had a long drive at the end of the day to get to the other side of Houston, so we cranked out the miles, for one stretch at 19/20mph. I felt comfortable for a while, and I don’t think it was foolishness (because you tend to know how to manage your body post-injury), but I suddenly started to have those stabbing pains shooting from both knees which were reminiscent of when my dreaded injury kicked in five plus months ago. Aaargh! Please no! So we slowed down for the last stretch, completed the century, and then drove two hours back to Katy, just outside Houston. I spoke to Geoff who had managed to talk his way into the British Airways VIP lounge during a long layover in Chicago, and he said: “I don’t even understand what’s on the menu, but it’s great being in here!” So he’ll arrive back in England tomorrow to convalesce with his family.

It’s been another long one. I’ll save the great things that happened tonight for tomorrow’s blog. I hope you’re having a good weekend. Goodnight. 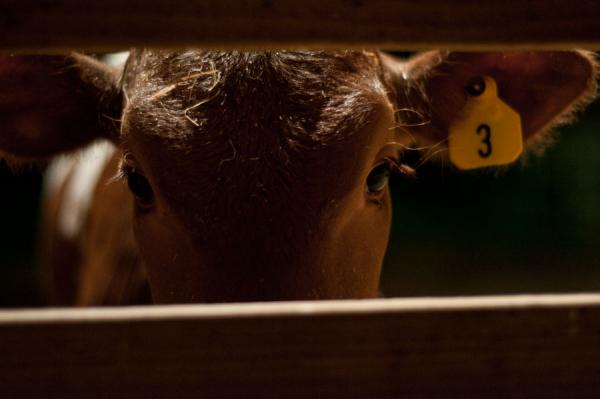