I’ve just finished reading a book on the life of Adoniram Judson. What can I say? 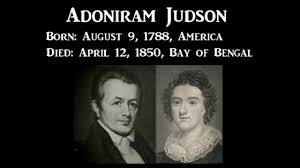 My logic in risking life and limb in Burundi over the last seventeen years or so has always been the same. Either Jesus truly did die and then rise from the dead, or He didn’t. Either He is the Saviour of the world, or He isn’t. Either He is the only way to God, or He isn’t. If He isn’t, I’m wasting my life, relatively-speaking (although we are helping lift lots of folks out of poverty and suffering). But if He is who He claimed to be, then no price is too high, no land is too distant, no task is more urgent than to share this costly message to the nations.

Yet when I read of yesteryear’s heroes of the faith, their single-minded devotion blows my mind.

After spending a few years actively antagonistic to the faith, God nailed him and called him to Burma.  Regarding his desires to marry Ann, he wrote to her father:

“I have now to ask, whether you can consent to part with your daughter early next spring, to see her no more in this world; whether you can consent to her departure, and her subjection to the hardships and sufferings of a missionary life; whether you can consent to her exposure to the dangers of the ocean; to the fatal influence of the southern climate of India; to every kind of want and distress; to degradation, insult, persecution, and perhaps a violent death. Can you consent to all this, for the sake of him who left his heavenly home, and died for her and for you; for the sake of perishing, immortal souls; for the sake of Zion, and the glory of God? Can you consent to all this, in hope of soon meeting your daughter in the world of glory, with the crown of righteousness, brightened with the acclamations of praise which shall redound to her Savior from heathens saved, through her means, from eternal woe and despair?”

His father-in-law duly consented, and the Judsons reached Rangoon in 1813, not knowing if they’d be executed immediately by the King, who put to death anyone he pleased on a whim. They spent six years learning the language and seven years before seeing their first convert. All three of their children died, followed by Ann. He married again, and was widowed again. In total six of his children died. The only time he went back to the USA in 38 years was when his second wife was sick and needed repatriating, but she died at sea. He took twenty years to translate the Bible. He spent seventeen horrific months in the notorious Ava prison during the Anglo-Burmese war, suffering indescribable treatment. As a result, for the rest of his life he bore the scars made by the chains and iron shackles which had bound him during that time.

Yet upon his release, he went back to the regional authority to gain permission to resume preaching the gospel. The scornful ruler denied his request, saying: “My people are not fools enough to listen to anything a missionary might say, but I fear they might be impressed by your scars and turn to your religion!”

When he first arrived, nobody had ever heard the name of Jesus in the Burmese kingdom. When he died there were 7,000 baptised Karen willing to stick their necks out (literally) as Jesus-followers. Now they number in their millions. 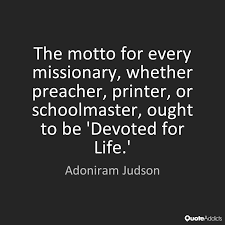 Back to my logic at the start. Either he endured unimaginable hardship and loss for nothing, living for a delusion, wasting his talents, and worse even, sacrificing others’ lives in the process,

he, his wife Ann, and the many others who followed in his footsteps (many dying after just a few weeks of their arrival) laid down their lives for the highest calling. They counted the cost and gave it their all.

In comparison, how lightweight and inadequate I (and you) might be tempted to feel. And yet, that is not the purpose of writing this. Instead, I choose to be inspired afresh.

Few of us will go to such harsh climates and contexts as the Judsons, but we are all called in different ways to a self-sacrificial lifestyle – to love others at a cost to ourselves.

And maybe some of us have begun to hear the call to ‘leave our nets behind’ and follow Jesus wherever he takes us – even to dangerous and difficult places, where there is no church, where there are no gospel workers?

There is terrible poverty, violence and suffering here in Burundi, but there is no doubt the Church here is established and growing; whereas there are still so many places across the world where the gospel has never gone or never taken root and there is a great need for passionate followers of Jesus.

That’s why this year I have become an advocate/ambassador for Frontiers.

These guys are all about unreached peoples, all about loving our enemies, all about the world’s 1.7 billion Muslims – most of whom have never met a follower of Jesus.

Do have a look at their website, or join them on Facebook: fb.com/frontiersukfriends and Twitter: twitter.com/frontiersuk, especially if you have been inspired by the life and sacrifice of Adoniram Judsom. And if, amongst the various missionaries your church supports, there isn’t any engagement with unreached people groups, could you flag that up and help rectify it?