Skip to content
Greetings from somewhere in the desert!
What a day! We were up at 515 AM to prepare to leave from just North of San Diego.  We dipped our bikes in the sea and began our 3,152 mile journey across this huge country. These are 8 guys with us for the first few days, and they have brought a great team of chefs and supporters to make the start a real cracker. 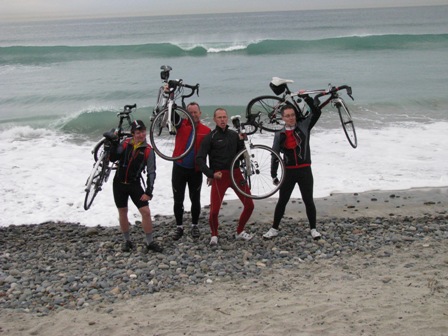 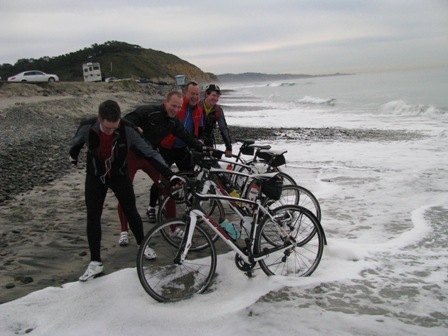 (Team dipping their back tires in the Pacific Ocean) 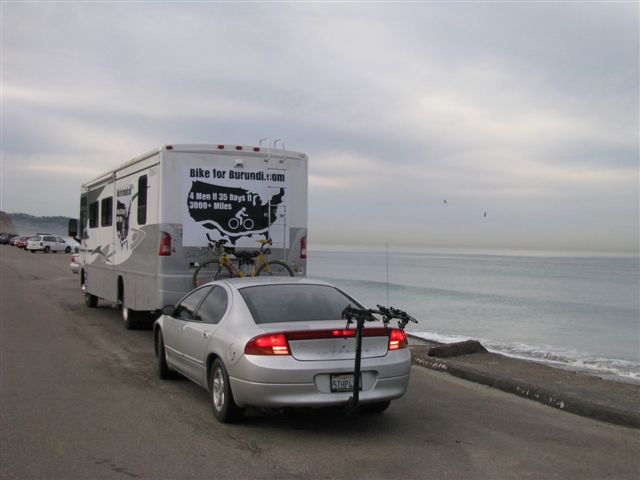 (The RV at the beach)
We knew the first 50 miles would be a killer – it was almost all uphill into the mountains and the sun was blazing down on us. I doubted my knees would make it, but literally prayed every mile. After 21 miles Geoff was the one who was really struggling with what seemed to be heat exhaustion. So we ended up going very slowly as a foursome, whilst the other eight went ahead for rest of the day. We ground out the miles in stunning scenery, which simply got even more beautiful as the day wore on. Weirdly, despite the heat, there was even some snow and I managed to land a well-aimed snowball at Geoff’s butt (well OK, it’s not hard to miss!). Poor man, he was really struggling by the 60 mile mark with a throbbing headache, and so it looked like we would have to end early. My knees meantime were sore and of concern, but I was so excited and relieved to have made it over the hump. The last thirty miles were downhill into the desert, full of cacti and boulders. It was just awe-inspiring. We reached 46 mph on the way down and one of us nearly wiped into the cliff wall. 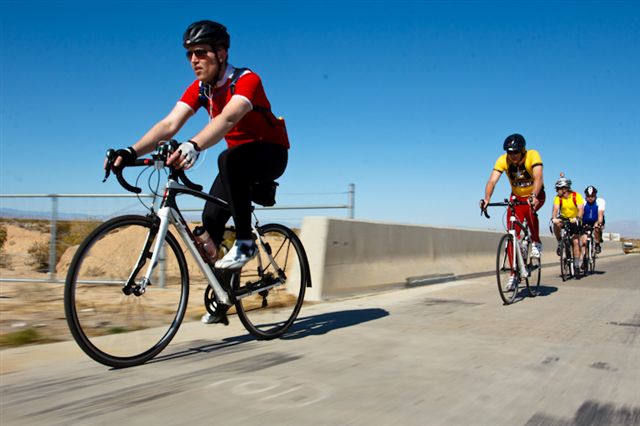 (The team biking together on their first day)
At the point of quitting, Geoff took an Ibuprofen and what must have been some illicit substances, because he promptly blasted off for the last 20 miles, leaving Craig and I for dust with other Jeff struggling to keep up with him too.
So we all made it! I’m so chuffed, relieved, exhausted and elated. Tomorrow will be over a hundred miles so we all off to bed for some well-earned kip, which is only threatened by someone’s obnoxious smells!
It has honestly been one of the most memorable days of my life. Roll on the rest of our adventure!