I only got a few hours sleep, as usual. At 6am, we regrouped. Geoff came out and said he was feeling too rough and needed to go back to England. He couldn’t put his family through any more of this, and didn’t want to be a further liability to the team. It was horrible, and deeply sad. He is the reason we’re here. Bike for Burundi was his idea. So his contribution’s been massive even now that he leaves, but that doesn’t make him feel any better when he’s invested thousands of pounds and hundreds of hours in training and planning, as well as the general sacrifice involved for his whole family. Gutting. We cried together, prayed together, and headed off, heavy-hearted, leaving him to seek a doctor’s letter because British Airways wouldn’t let him on the flight otherwise.

Frankly I didn’t want to ride. We drove back to our starting point. I had a sticky phone call with Lizzie telling me off for staying up late writing the blog rather than getting much-needed sleep. If the human body is designed to recharge like a battery during sleeping hours, then my batteries are seriously low. I have a love/hate relationship with this blog. It’s enjoyable sometimes, but a complete pain in the neck most of the time because I have to write it when feeling totally exhausted; but I see it as an integral part of the deal in terms of thanking you all for your contributions and keeping you up to speed. I love how many of you write in, saying that you read it to your family over breakfast each morning and have a good chuckle, and such like. That’s great. But it does mean less sleep, and incurring the potential wrath of my Missus! I think the combination of sleep deprivation and having just said goodbye to Geoff made for more tears. When you’re feeling low, you just want to be with your loved ones.

The day went fine. Due to just feeling sad, I suggested we just did 60miles, particularly as we are way ahead of our schedule; but Craig was gentle and firm, and so I did as I was told(!), and was glad for it. We rode 104miles in total. It was a late start because of the Geoff situation. I began with a puncture (had one yesterday too), then other Jeff’s chain broke clean off so that took a while to fix. We came across a couple on a tandem bike who were taking a photo outside the ‘Smallest Active Catholic Church in the World’, so we invited them into the RV for a drink. They were Mormons, very pleasant, spending several months wending their way across the States. His business card reads: “We’re retired. Why hurry?” Good point. All this meant we had made little progress by noon, but we just persevered through until sundown. 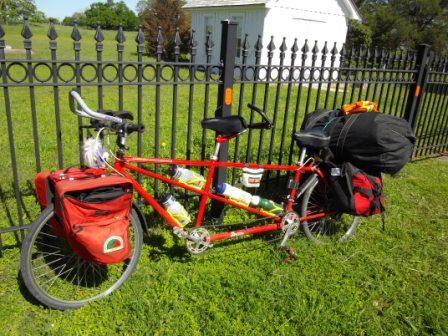 This part of Texas is beautiful. It has a funky feel, going through little towns with random events taking place. There was Burton’s cotton gin festival, and Warrenton’s Antique Show, which was obviously going to start tomorrow and was massive, with mile after mile of marquees getting put up and displaying what looked like a load of rubbish. There were fields full of resplendent wildflowers. We are seeing it at the best time of year. Apparently there were no rains at all last year, but seven inches fell just this week (hence the RV getting stuck in the mud yesterday), so people are happy with that, and the fauna is blooming beautifully. A downside was that bugs were out in force, and one of them flew into my (now puffy) eye at high speed, bouncing off my eyeball presumably dead because half its body stayed behind.

Part of Bonnie’s job is to line up places for us to stay, and she liaises with John as he drives the RV. By 5pm we didn’t have one yet. Sadly my cousin Sharon and her husband Rohan were stuck with passport issues in India, which meant they couldn’t host us. We stopped for a coke at a diner. The waitress, Shannon, got us our drink, and then came back quoting stuff from our website. She’d seen the RV’s massive sticker in the car park and immediately gone on line on her iPhone. The content had moved her. She was very helpful. I asked if she knew where we could stay, and she hooked me up with a number. I rang, a German lady answered the phone, and it was the perfect fit.

We’re there now. Her husband is a crazy man called Ernie, short in stature but larger than life. He’s built this whole hosting complex on his ranch because he loves people. There’s a bar operating on an honour code (help yourself), animals (so Jeff and John have been off milking cows), and he even built a stage to hold concerts. Not short of self-confidence, but not arrogant either, he said: “I’m full of ideas, and the thing about me… I make them happen!” “You know, I made my first million, and I spent it… so I made another million!” It’s a shame we can’t hang out more, as we’d have lots of fun with him.

Burundi was the country today in Operation World, a daily prayer guide for every nation on earth. Well, things aren’t looking good there. The unions are calling on mass strikes, basic utility bills have quadrupled in price in the last three months, and I’ve just seen a report on the deepening corruption crisis. Most people are literally struggling to eat. So do pray.

Geoff’s just posted this http://bikeforburundi.tumblr.com/ which includes the following: “I have probably spent more time in tears of sadness than actual time spent pedaling. But, for each tear I have shed I pray it represented an orphan’s life transformed in Burundi, Africa. If that’s the case, then the ride whatever it had thrown up has been a total success…” He’s right, but it’s still gutting. David Strauss has also posted something, and it’s phenomenal, so do check out the following: http://www.youtube.com/watch?v=iDUb6TbK26c and you’ll get a great feel for what we’re going through, literally. Right, I need to go to bed, sleeping pills have been popped, the week ends tomorrow and we’ve cranked out six 100+mile days in a row. As we lie down to sleep now, we can hear the coyotes howling just a few hundred yards away. They sound hideous but it’s all part of a very rich (but sad today) experience. Cheerio!