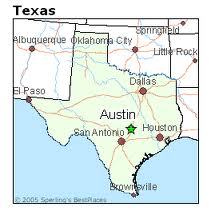 The great modern philosopher and sage, Jennifer Aniston, once declared: “There are no regrets in life, just lessons.” It sounds profound at first, but actually on closer inspection it’s really stupid, I think. Sorry to shoot you down, Jen, when you’re not here to defend yourself (you’re welcome to make a guest appearance though if you’re good for lubing my chain each day and fixing my inner tubes). I mean, how could I/she/you not regret hurting people along the way, making mistakes that had negative repercussions on others’ lives? That would make us hopelessly heartless and egotistical, which I’m sure Jen’s not. There are lessons in life, but there are most certainly regrets too, surely.

Why such a heavy and deep opening salvo? Well, last night as we finished our ride, a lady called Jenny told us to use her driveway to turn the RV around as it was a dangerous road to be stationed on the side of. We got talking, and actually she was maybe the first person we’ve met who didn’t think we were crazy nutters for undertaking this adventure. The reason is that she was from Berkley, California, original hippy country, and back in the sixties at the height of the flower power season, her friends did a similar trip to us… but by foot! Yes, they walked all the way across the USA from West to East coast over nine months. She was 24-years-old at the time and had a job, so she chose not to take part, quite understandably. But that decision, fifty years on, constitutes one of her biggest regrets.

So can we make a deal together? I’ve lived this way for a long time now. I’ve messed up in the past. I’ve hurt former girlfriends (and have sought forgiveness from all of them wherever possible), and so yes, I’ve had regrets. But can we choose to live in such a way that, as far as possible, we won’t have need to have any regrets? It’s a state of mind towards living – an attitude that will shape us into recklessly generous people, endearingly spontaneous folks, risk-takers, adventurers, passionate for life and compassionate for others. Part of my life’s mission statement has included the line: “Seek to live so as to get to the end of my life with no regrets.” Sadly, most people’s highest aspiration is to arrive safely at death…

Wow, Simon, that’s a bit of a departure from the usual light-hearted banter. OK, well let’s get back to it. The reason for it though is that today I turned 39, so a birthday always provides opportunity for reflection, particularly one during which you’re perched delicately on a razor blade for six hours straight. Yes, only six hours today, as it was our speediest century so far, and we had to stop because of another speaking engagement quite a long drive away in Austin.

I’m actually not really into birthdays. I can celebrate others’ with gusto, but because I’m not into receiving presents (I’m just honestly deeply content without extra unnecessary ‘stuff’ cluttering up my life), I literally would not have noticed it today had the team not given me a card, and several hundred messages come through on Facebook (thanks for those, by the way). Yet we have made it a point back in Burundi to encourage the celebration of birthdays, because life is such a tenuous gift out there. If 20% of babies don’t make it to five, then it’s worth celebrating; and if life-expectancy is in the forties, then you’ll rejoice at any gray hair that comes through on your head – it’s a badge of honour! So with some people, we make up a date for them, because they don’t know the day they were born on (many of the older ones don’t even know the year), and we try to make it special for them, because life is hard enough without missing an spreading a little love around. 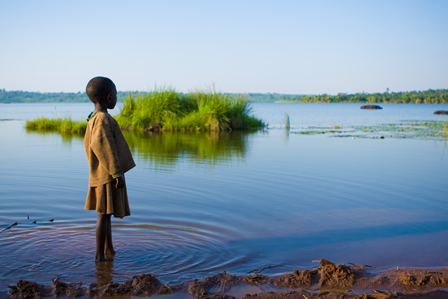 There wasn’t that much to report on the ride. The tornado warnings of a couple of days ago came to nothing. Actually Jeff’s Mum’s friend, who lives near where we cycled past, had a studio in her back garden where she worked as an artist. A few years back, a tornado struck, lifted the whole studio off the ground, then sucked her out of it, and she regained consciousness a mile away with her studio close by. Quite a story! She’s also made a donation to Bike for Burundi, so Alison, if you’re reading this, we’re glad you’re still alive! And I presume with your second chance at life, you don’t want to have any regrets either.

We averaged 16mph today, so it was our quickest so far. My knees were holding up well. We came to a junction and a couple dithered so we pressed on. A few hundred yards later, they drove up to us, opened the window, and hurled a tirade of abuse at us, pure bile. What makes people quite that angry?! They are thankfully the exception. Texans have been incredibly friendly and generous in our experience – although we rode past a farm gate which didn’t look too inviting with the message emblazoned in spray paint: “Enter this property and you will be shot.” I think I’m right in saying that Texan law allows you to shoot anyone on your property that shouldn’t be there. Back to their generous nature: Karen, mentioned above, said she’d make a donation after our brief encounter yesterday, and at a Shell station I spoke to Lynne who also said she would just on the back of a 3-minute chat (although not so positively, she seemed to think Africa was a country). Also, in Lynne’s case I’ll believe it when I see her contribution on the website, because I’d gone into the men’s toilet just a few moments before, and Jeff was equally desperate (remember how in sync we are) and so dashed into the ladies’, presuming nobody would be there; but there he stumbled on Lynne’s little daughter, one minute ensconced on the throne enjoying a holy moment, the next shrieking for protection from this dodgy male intruder!

Drama struck at lunchtime. John pulled off the main road onto the grassy verge, which looked innocuous enough. However, the wheels sunk deep in the mud, and they were truly stuck. At this stage we cyclists didn’t know what was going on. But with the wheels stuck, the RV wasn’t as high, and my heart skipped a beat thinking it had turned on its side. Anyway, we ate lunch and a lovely African-American man pulled over to help. It’s interesting that I felt the need to put his race in there, as I think about it. You see, I’m white, and just about everybody I hang out with is white – people in our neighbourhood, at the kids’ school, at church, at the beach. In Africa I’m used to being the only white man around. Here, although there are many people of other races, I’ve hardly interacted with any. America remains a deeply segregated society. Hmm… so this guy calls his friend (in the meantime we were off piling up the miles) who brings his tractor and has some difficulty but eventually manages to haul our precious RV back on the road. Oof!

Our host was Michael Madison, a great guy I’d met out in Burundi a few years back. He’d organized for me to give a talk, as well as some great food for us. Over supper, I asked our host Dan: “So what do you do?” He answered: “I’m an engineer, I design chips.” “Oh wow,” I replied, “Jeff’s Dad is a ship’s captain.” Just too tired! These talks on top of the riding are a real challenge physically, but I think people were very moved. Everyone seemed to be out cutting the grass today, so I had the added nice touch of puffy swollen bloodshot drugged-up eyes from the pollens, and it was a struggle not to itch. However, my discomfort pales into insignificance compared to Geoff – oh dear, he’s only just rejoined us and he’s in a really bad way again. He’s talked of leaving for England tomorrow, but may wait until Sunday as we will be in Houston. I didn’t get to talk to him after my session because he’d already gone to bed. So sad. Do lift him up.

We returned to Dan’s place for an incredible treat: Michael had lined up for us the one and only gorgeous Georgie from Austen Deep – as the name suggests, it’s all about deep-tissue massage. Georgie seemed so kind and gentle, but once I lay prostrate on her spongy table, she turned into a butchering beast. I like to think I have a high pain threshold, but she had me grimacing, shrieking, moaning and groaning – I was putty in her hands. Had she threatened me, I’d have signed over my house (if I had one) or recanted my faith. It was excruciating, and yet maybe somewhere deep in down it was also a pleasure – I’m not sure yet, but think I’ll process it better through some post-trip counseling. When I got up at the end, I could hardly walk. I felt like a boxer after fifteen rounds. I staggered to the shower (I think), but can’t remember really as it’s all a bit of a blur. I hope that’s what I did because I now find myself undressed and lying on the bed, so I hope I’m the one who did the undressing. And I’m wondering whether I’ll be able to even get up tomorrow at 6am, let alone cycle another hundred miles. Apparently that’s how I’m meant to fell… so no regrets. 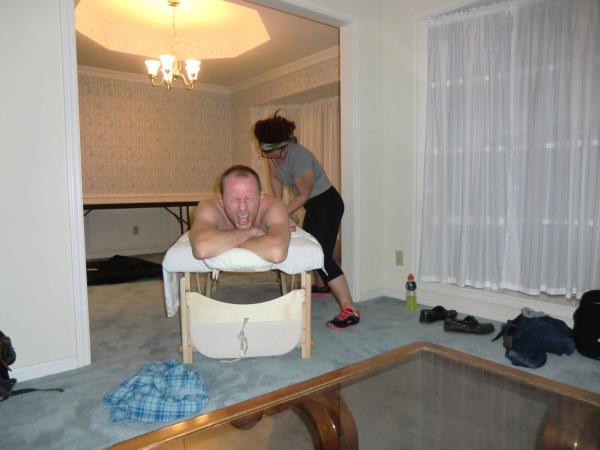 (Simon getting the knots worked out of him!)