From tomorrow, Sunday 6th August until the 20th August, we will be conducting our annual massive apostolic outreach campaign for the 12th year in a row. 565 people are being sent out in 21 different areas, partnering with 192 churches. Trusting as with all those previous campaigns, many thousands of people will come to know Jesus at this time. 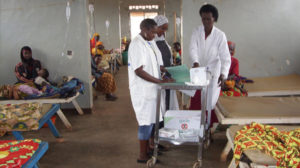 There have been so many stunning stories of God’s miraculous power over those years, including demons being cast out, cripples walking, blind seeing, deaf hearing, mute speaking, witchdoctors burning their charms and submitting to the Highest Power, and last year’s resurrection:

“17-year-old Aristide from Cibitoke was pronounced dead by the doctor, who withdrew the drip and covered his body with a sheet. The mother started weeping hysterically, and her cries drew the attention of our team nearby. One of them came rushing in, and felt led to claim his life back from the dead. After praying over the corpse, Aristide started breathing again, and he and his mother promptly gave their lives to the Lord, along with another forty-one people who witnessed or heard about what happened.”

I’m asking for your prayers again, as they make all the difference. Maybe this missive could be read out at your church service? Of the 11 previous campaigns, just once I didn’t mobilise folks around the world to pray en masse, and that was the year when we had the most persecution and challenges – not a coincidence in my opinion. So please pray for boldness, protection, unity, good health, faithful gospel witness, anointing, powerful demonstrations of God’s power, and lasting disciples to be made.

I will write with feedback upon their return.