It was a humdinger of a day. In fact it made the first day up into the mountains from the beach outside San Diego look like a stroll in the park. It’s also my luscious Lizzie’s birthday, so I’m sad not to be with her to celebrate together. What a great woman, and what a lucky man I am!

We knew it was going to be difficult, so could we possibly make it, with the state of my knees slowing us down? Probably not, but we’d try.

Backtracking to last night, we were hosted by David and Corry Wells, relatives of a friend of mine in Mt Pleasant, and they were just superb. We were fed royally, they washed our dirty linen, and bent over backwards to do whatever we asked. I have seldom been so tired in my life, but still took a pill to help me sleep beyond 2am as has been my norm thus far. It worked, and that sleep was much needed. 530am breakfast enabled us to get away by 615am, but it was a fair drive to the starting point.

It took us 38miles under the fierce sun to get out of the sprawl of Phoenix/Tempe – it just went on and on. At one stage we cycled past the Chicago Cubs doing their spring training. Dad then left us, and he will fly back to Charleston to be with Lizzie and family. It was great to have him with us for the first few days, and he totally came into his own when Geoff needed someone to kick butt on his behalf at the ER, and then with medical evacuation by helicopter and keeping Geoff company until his family arrived. I’m proud of my Dad! Incidentally, Geoff is on the mend, albeit slowly, and is just enjoying time with his family in Palm Springs for at least the next 11 days.

And then we came to the mother of all climbs into the mountains, for miles at a 6o incline. As if that wasn’t enough, there was also a headwind. To compound things further, my derrière is incredibly sore. Because of my knees being injured for the last 5 months, I have barely sat in the saddle, unlike the others who therefore have more ‘acclimatised’ backsides, and today’s ride adds our tally of hours riding to 40 in the last five days! It really is a pain in the butt! So I sit down for as long as I can bear and then I stand and pedal upright for a few moments’ relief, which uses up lots more energy so can’t be sustained. 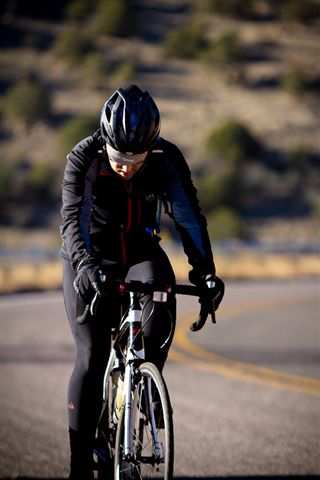 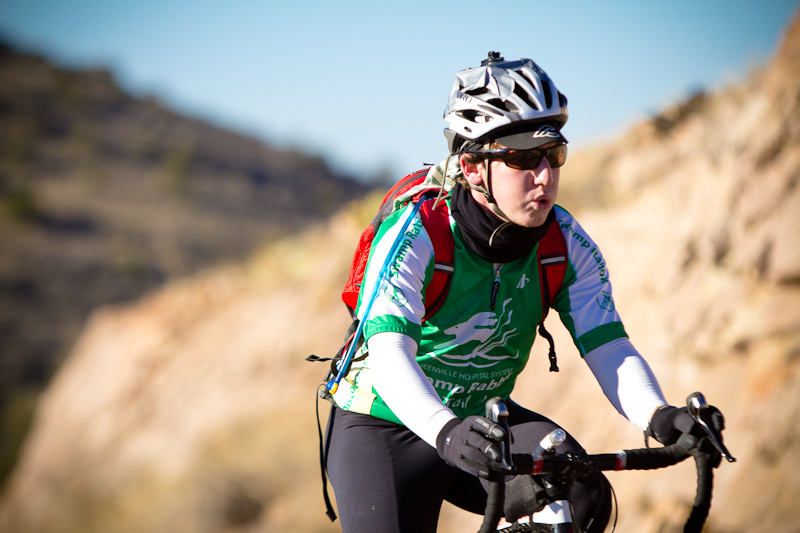 Sometimes with the incline and the wind, we were down to 5mph, which makes for a long day, with very slow progress. It really was a question of miles, not smiles, as the miles almost begrudgingly accumulated. We came across a delightful England threesome (parents and son from Devon), who are doing the same route as us but with no support vehicle i.e. carrying tent, food, clothes, etc in panniers on their bikes – much more hard-core than us, although taking a few more days to do it. They joined us the RV for a quick chat, drink and food before we ploughed on.

And on and on and on. At the pinnacle of the mountain, 14,000feet up (well, not quite, but it felt like that), there was a store called ‘Top of the World Hardware’ or some such name. I forget now, but it did feel we were indeed at the top of the world, with some gorgeous scenery, frankly we were too wasted to notice much. Daylight was fading, so it was a race against the clock to make it down the other side, and we were truly wiped out. The temperature dropped starkly and now instead of thinking of our sun-burnt faces, our teeth were chattering in the cold.

Anyways, yes, we did make it all the way to Globe, and promptly collapsed on the floor of the RV in exhausted elation. It was ‘only’ 93miles, but wow did we work for them. It was comfortably the hardest day so far, and I hope my knees will recover for tomorrow because they were calling out progressively louder for me to stop. Actually both Craig and I are walking gingerly like bandy-legged old men, coming sideways up the steps. Roll on tomorrow and another day at the office (hopefully 110miles+)! Someone’s donated us a hotel room, so we’ve been able to have showers, get scrubbed up, chomp a few thousand more calories, and now it’s time for bed.