We were off on the road by 7am and made good progress at first. We are at high altitude so were wrapped up in all our cold gear. In fact, there were some clouds for the first time this week, which was a pleasant change. Soon enough, we had our second dog encounter. Again I just had my head down looking at the road ahead, so would have got the shock of my life had Jeff not shouted from behind. I looked up to see three big black bitches bearing down on us, fangs specially sharpened for the occasion. So I jumped off my bike and shouted at Craig to do the same. As soon as you’re off your bike, most of these frothing monsters instantly turn into docile softies. But Craig insisted on continuing to cycle, and Jeff and I were treated to a few hundred yards of hilarity with him trying to shoo them away, shouting ‘Nooooo! Noooo!’ as they snarled at his rotating legs! We laughed our heads off. In fact I chuckled repeatedly throughout the day as I relived it, and am again now as I write about it. 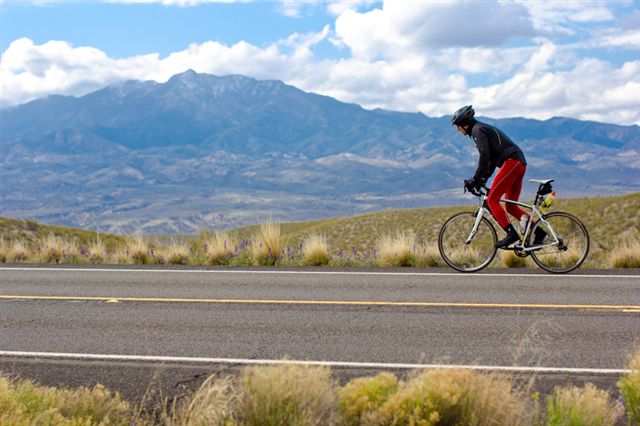 At one stage we came across a biker gang. It was the middle of nowhere (as is a lot of our adventure), but there was a journeyman’s café, and about forty of them, hairy, leather-clad, mean-looking, were standing around their eclectic selection of bikes. I’ve greeted everyone I’ve cycled past on this trip so far with great gusto, but in this instance kept my eyes looking straight ahead as they watched us three queer-looking men in lycra leotards attempt to pass by inconspicuously. Sure enough, to reinforce my prejudice, a couple of miles later, I was cycling marginally on the main road (as opposed to the cycle lane – the reason for doing so will be explained below), when they blasted past, and ran me off the road. God bless them!

So why was I not completely in the cycling lane? Because I was in so much pain. The cycle lanes have more bumps in them. From the first hour, the deep bruising in my backside meant that I had a routine of sitting in the saddle for 3mins and then standing to cycle for 1min. Back in 1996, I hitchhiked from Kigali, Rwanda to Arusha, Tanzania. It was only a few hundred miles and I thought it would take just over a day. Well, it took three full days, and was the worst journey in my life. One stretch involved two kids sat on my numbed lap for six hours and one of them vomiting all down me. Another stretch involved being sat in the back of a cramped ‘combi’ (seating capacity of sixteen) with twenty six other sweaty people, for three hours, and from the get go looking down at my seat and discovering it didn’t exist – there was just a vertical tubular metal rod which had at one stage held a seat – and for three hours I had to hold myself over this rod so that I wasn’t impaled! Well, today was the most painful day for my backside since that horrible experience! I winced and grimaced a’plenty as we ground out the miles.

We arrived in Safford and stopped at the traffic lights. There was a biker in the next door lane straddling a beautiful three-wheel machine with a stars-and-stripes bandana on his head. He said: “Are you guys with Bike for Burundi?” It turned out he’s a pastor (a refreshingly unconventional-looking one!) and some of our team will be at his church tomorrow! But in the meantime, we still had 35miles to do. We’d covered 77miles before a late lunch, and it had been too long on the road without a good meal, due to some miscommunications between us and the RV. We won’t let that happen again because it’s so easy to wipe out through lack of water and food.

Craig was really struggling with diarrhea. Hey, we’re all struggling with our guts because of having to eat so much, but it hit Craig hard today. He struggles to eat enough food, as it’s plain difficult to swallow enough fuel during the day. So the last stretch was a bit of a grind. We did come across a man pushing a shopping cart miles from anywhere, and stopped off to say a quick hi. His name was Bryan, his Dad had died, he was on his way to Austin and had been walking for two months. Wow! We were in a hurry with a deadline to meet, so we quickly moved on. But after a few hundred yards I turned around. The frustration with this trip is that we have so little time to play with that we miss out on the personal encounters. I rode back down the hill and asked if I could pray for him, and he was very keen. So I just prayed that he would meet God on his crazy journey through such beautiful scenery. He was very grateful, and Bryan, if you’re reading this, I hope you find the Way on your personal spiritual journey.

That meeting so energized me that I was able to blast up the mountain to catch up with the others, and we then sailed down the other side as the sun was setting and the temperatures were dropping sharply. It was a race against time back to Safford to enjoy a lovely meal with our hosts. We’ve all split up and gone to different families, and are looking forward to a rest day tomorrow. In total we covered 107miles, the knees are just about holding still, and the feeling of exhaustion and satisfaction is indescribable. Here ends the first week, almost. Tomorrow we’ll just do a recovery ride of a few miles, as Monday is reckoned to be the hardest of all the 35 days. Watch this space… 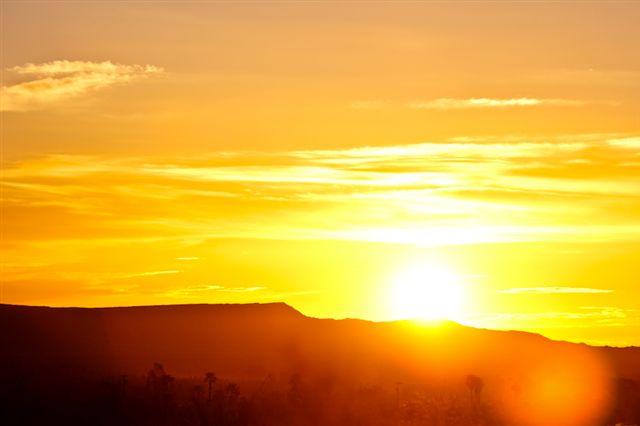