I’ve been reading a friend’s (maybe that’s too strong – we’ve met and emailed once or twice, but I LOVE what he does and how he approaches things) book called ‘Speaking of Jesus – the art of not-evangelism’). The guy’s name is Carl Medearis. Definitely worth a read. Check out this beautiful inspired encounter and dialogue:

One day I saw my Muslim-Arab friend sweating as he talked with my other friend, a fine, conservative-minded evangelical Christian. It looked like the two had locked horns in a battle to the death. It happened in Colorado this past summer. We were hosting a gathering of some of our longtime friends from the Middle East and brought in a bunch of American Christian friends to talk about God, the Middle East, and how to bring hope to Muslim countries. There were about forty-five of us together for three days. We were having a great time – until I looked over and saw these two all tangled up.

The next thing I knew, my Muslim friend (not a follower of Jesus) had gone out on the deck and was smoking a cigarette like his life depended on how fast he could suck it down. I walked out and nonchalantly said: “What’s up, bro?”

Talk about a loaded question full of semantic nuance. Here’s my answer and what happened: 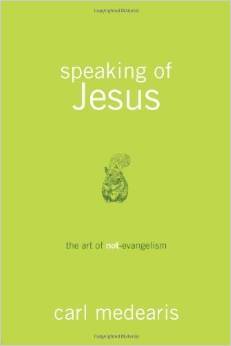 “He wants me to stop living in the Middle East and loving my family.” I told him I was pretty sure that’s not what this friend meant, but if that’s what ‘conversion to Christianity’ is, then I agreed – he shouldn’t convert.

“No I’m not,” I said. “Not like that. Not at all. I think you should stay in your country, love your family, and be who God has made you to be.”

Then I asked him this: “What do you think God thinks when He looks down at all 6.5 billion people on earth?”
“He thinks they’re all screwed up,” he said.

“Yep, that’s what I think God’s thinking too. So what do you think God would like to do with all these messed-up people? Muslims, Christians, Jews, Hindus, nothings, everyone?”

He had never thought of that before, so he wasn’t sure. But he did say God would probably want to “help them not be so screwed up.” I agreed.

“So you might say that God would like to convert all 6.5 billion people on earth. Not to a religion, but to Himself. He would like everyone to be like Him. To be converted into Him. But how would He do that? He’d need a converter.”

I went on to tell my friend that if he bought an appliance here in the States and took it back to the Middle East, he’d need something to change the current from 110 to 220 volts. “What’s that called?” I asked him

“A transformer or converter,” he said.

“That’s right. So what is God’s transformer to get us all back the way God wants us to be? To change us? To convert us?”

He gasped (literally) and said, “It’s Jesus, I never thought of that – but it’s Jesus, He’s the converter.”

He got so excited he called his wife out and told her the whole conversation. She started to cry.

We sat on the deck and prayed that God’s ‘converter’ or ‘transformer’ would change us into the current that can be connected to God. And that He would do this with all of our friends.

It was a profound moment. Amazing that just a half hour earlier he was about to bite this other guy’s head off for ‘trying to convert’ him and now he sat with me in tears praying…