Last week a group from the Segal Family Foundation came to visit and check out a number of Burundi projects, with a view to developing potential partnerships. So we spent a few days together, and I’m hopeful it’ll yield some great fruit, as they seemed to love what our guys are doing.

At one stage we were driving on some muddy roads after a recent downpour, three cars in convoy, twisting and turning through the hills. We were on our way to check out the beautiful cow project we’re involved in. Evariste’s (second from the left) car was in front of me, and I watched it slide inexorably into the ditch. The front wheel was totally buried, such that the 4×4 chassis was now resting on the sludgy ground. 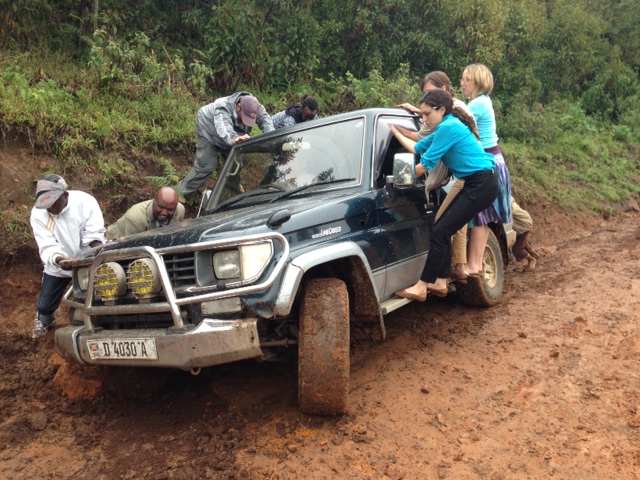 The photo shows us attempting to get out. Taken by Antoine, who funnily enough was the only one who managed to stay dirt-free, the rest of us were muddy as can be as the spinning tyres spewed mud all over our clothing and faces. It was a lot of fun. Notice how helpful the women were, adding their weight to the vehicle as us lads tried to push it out! Their thinking was that the extra tonnage they contributed to the other side (none of them fatties though!) would help extricate the Landcruiser. Hmm… Anyways, it took about forty minutes before we managed to get out, and by that time it was too late to see the cows – shame. We retreated, defeated. More sliding ensued, with one vehicle denting itself as it span outwards and then landed in another ditch.

All in all, great fun! And then I hooked up with another few potential partners over the weekend, as well as going upcountry again to share at a few churches and schools. This is one of my key roles out here, connecting folk from the outside who have means to help with those on the inside doing great stuff who need the finances to make it all happen. Very satisfying.