This is a powerful entry from my new devotional ‘Choose Life’, on daily choices, which will be out in a few months:

After the end of apartheid in South Africa, a Truth and Reconciliation Commission was set up. During one hearing, in the presence of the victim’s mother, a policeman named van de Broek recounted how he had shot an eighteen-year-old boy and burned the body on a fire to destroy all evidence. Eight years later he returned to the same house and seized the boy’s father. The wife watched as her husband was tied up, had petrol poured over him and was then set alight. The courtroom became completely silent as the judge offered the widow the opportunity to respond. “What do you want from Mr. van de Broek?” he asked. 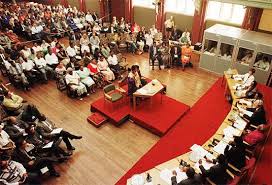 She asked van de Broek to go and collect the dust from the place where he’d burnt her husband’s body, so she could honour him with a proper burial. He was so ashamed he couldn’t look her in the eye, but nodded in agreement. Then she added: “Mr. van de Broek took all my family away from me, and I still have a lot of love to give. Twice a month, I would like for him to come to the ghetto and spend a day with me so I can be a mother to him. And I would like Mr. van de Broek to know that he is forgiven by God, and that I forgive him too. I would like to embrace him so he can know my forgiveness is real.”

As the elderly woman pronounced those astoundingly grace-filled words and walked towards him, some people began spontaneously singing ‘Amazing Grace’, but van de Broek didn’t hear any of it, because he was so totally overwhelmed that he had fainted.

Lord, I myself am totally overwhelmed by that story of the triumph of mercy over sacrifice. I know it’s a picture of what you did for me in Jesus. I praise your name. Help me to model that extraordinary grace in my life towards others today. Amen!