We scoffed lots of food at 6am at our Hampton Inn before heading out on this last week of our epic adventure. The sun blazed down on us all day, which was mostly spent on Highway 10 from Pensacola to Marianna, where I am now writing to you from a grotty room at the inappropriately named ‘Executive Inn Motel’. The others are in an RV park a couple of miles away, but we have three more guys joining our crew late tonight, driving up from Orlando, so we needed to meet them somewhere, and this seemed like a suitably smelly establishment to initiate them into the non-glamorous world of Bike for Burundi!

This was by far our speediest day on the road. Several factors were at play: it was easy terrain, we had a mild tailwind helping us along, but most importantly, Craig’s family were waiting for him further down the road. Craig is normally very chilled out, but in fifteen years of marriage, he had never until this trip spent more than a night away from his wife Emma, and then when the kids arrived from Beth (7) and Joel (5). So he was on a mission, he was focused, and he was cool, calm and collected, as he blasted off at silly speed expecting us to keep up with him. I had two punctures in the first hour, which slightly put a spanner in the works – we retired my back tire after the second one – it had served me well over several thousand miles, but was breaking up a little, and we needed to press on towards Craig’s prize. After thirty days of separation, he was just desperate to be reunited with his family, and reacquainted with his wife – not necessarily in that order!

At one stage we went past Cortez Street, which reminded me of a man by that same name who landed at Vera Cruz in 1529 to begin his conquest of Mexico with a small force of seven hundred men. He purposely set fire to his fleet of eleven ships once they had disembarked. And so his men on the shore watched their only means of retreat sink to the bottom of the Gulf of Mexico. With retreat no longer an option, there was only one direction to move, forward into the Mexican interior to meet whatever might come their way. Sometimes we need to take similarly drastic action in life or else we might go back to the old ways, settle for the easy option, and shortchange ourselves of new enlarged experiences. Hmm… Hey, maybe that’s a random thought, but you try sitting on a bicycle for six hours (our shortest day) and see if your mind doesn’t wander off on tangents!

We’d covered 82miles by lunch at the giddy speed (by our standards) of 17.8mph. Emma and kids and her Dad had flown out yesterday to Atlanta and driven down, and were just a few miles away. Craig was positively salivating, sweating, and stuttering in anticipation. It only took a few more miles back on the road, and there they were in Chipley, waiting for Daddy with a big banner. Precious little Joel, most affected by Craig’s absence, was über-excited, and it was a joy to see them all embrace. The excitement continued as they got to ride in the RV with all its gadgets, and I haven’t checked with John yet, but I wonder whether he is more or less keen to have children after his hour’s close exposure to the junior Rileys! 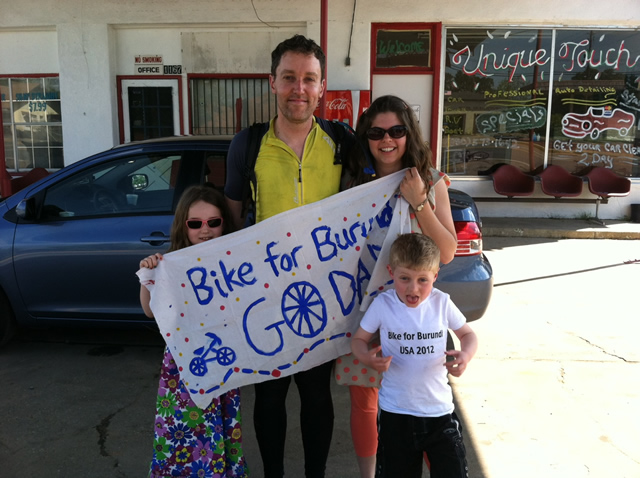 In no time we’d finished our 104miles, and Craig fickly abandoned us in a flash to go and spend the night with his family. What is that about?! I’m confused by his twisted loyalties there, and hope it doesn’t undermine team unity for the rest of the trip. We headed to an RV park, sweaty as ever, and jumped into a lovely section of a stream (called ‘the blue hole’) which was freezing but deeply refreshing and invigorating. The mosquitoes were out in force which slightly marred the experience, but it was a bonus treat at the end of another century ride, our fourteenth in a row.

So Brannon, Jeremy and Marcus will be with us in a few hours, which I’m excited about – more fresh legs in the mix – but not excited enough to wait up for them. I need some beauty sleep. See them, and you, tomorrow!

PS If you want to see how the lady I crashed into recounted the event, go to http://spokies.wordpress.com/