Last night we were hosted by David and Valerie, and their two daughters, Sydney (20) and Connie (18). 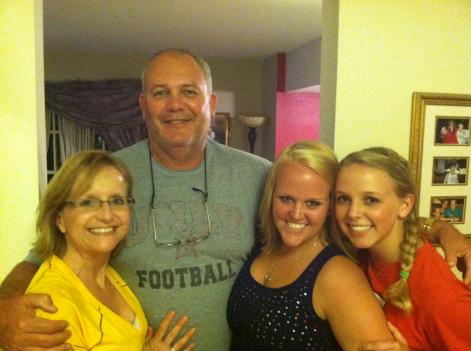 The girls were immediately swooning over our accents, and sat down to listen to us, not for the content but just the sound! It’s funny, the number of times I’ve given talks around the States and afterwards someone has said: “Thanks for your talk, I love your accent!” – damned with faint praise if that’s all that stuck! Actually, an American friend of mine said that my accent was worth an extra twenty IQ points in terms of how intelligent people would perceive me to be – which is great because I need all the help I can get!

The whole evening was great fun. They were superb hosts. Valerie works for the State Governor. US politics is so fascinating to me, and wherever we have been cycling throughout this enormous nation, we have been bombarded with campaign signs or billboards saying: ‘Vote for Hugh Jass for Sheriff’ or ‘Ivor Biggun for District Commissioner’, etc. There is so much money spent in politics here, which if successful leads to so much power. So the current Governor spent – wait for it – $60million of his own money to get elected to a position that pays $130,000/year. His name’s Rick Scott, and as Marcus noted: “Never trust a man with two first names!”

David was a state trooper for years, working the Florida Turnpike between Miami and Ft. Pierce, one of the heaviest drug-smuggling areas in the country. So he had all sorts of stories to tell, getting shot at, stopping a car with 950kg of cocaine in it as well as a gun used to murder someone the day before, all sorts of stuff. He said when he was young, it was ‘fun and gun’, he loved it, but once he had a family, the reality of potentially dying meant he needed to get out of the game. In a strange way I could relate to that with working in Burundi. Not that I’ll stop taking risks out there, but having family certainly makes me more measured in decision-making. My bottom line is choosing not to take decisions from a paradigm of fear (as most people do), but rather from faith. David now works for the State Department doing some very interesting stuff which he’d prefer I didn’t blog about. Shame! It was nice to have a positive interaction with someone from the State Department after all our very negative experiences with them, being delayed for a year whilst trying to get a visa to enter the country. So up until today, if I played the game ‘word association’ with you, State Department would immediately bring to mind ‘bureaucratic fascists’ and such like! Sorry David, as is always the case, don’t judge individuals by their organization.

Valerie actually took the day off work so she could fix us breakfast, far earlier than she would have liked! She and David sent us off with bloated stomachs and contented spirits. Actually over breakfast Jeremy looked at how much Jeff and I were chomping through, and made the observation: “My theory is that you guys are creatures of habit. In that first difficult week in the mountains where you had to burn 6,000 calories a day to get over those humps, you got used to stuffing your faces, and you just never stopped, even when the mountains ended and you no longer needed so much fuel.” Well, he might be right, because Jeff has put on 8lbs during the trip. My metabolism means that no matter what I eat, I remain a skinny runt. Craig’s definitely a bit of a porker though, and I mean that affectionately and non-judgmentally of course!

We said goodbyes and headed off to our starting point. In the RV, Ron came back with tears in his eyes. He’s having an amazing time on this ride, it’s potentially really life-shaping for him. He loves his family so much and wants to get things in the right order in life. We talked about how screwed up people’s priorities are – how so many work so hard to live beyond their means spending money they don’t have on things they don’t need to impress people they don’t like, sacrificing their loved ones in the process. That’s here in the affluent West at least, and particularly where we are in Mount Pleasant – and yet most people still aren’t happy. They just have more money to spend on disguising and masking their hurts and hang-ups. Along the same theme, a number of people have asked Craig how on earth he can take thirty five days off from work. “It’s easy,” he says, “it’s just a question of priorities. I made this adventure a priority. If you prioritized it, you could do it too.” And he’s no slacker, let me tell you. He’s worked like a dog for the last ten years. So maybe there’s a challenge in there for some of you – it’s not about doing what we’ve done, it doesn’t have to be that long, or physically taxing, etc – but prioritize something that has more significance to it than the big buck, and move from success to significance.

Today we ended our run of fifteen consecutive century rides. We could have done one, but it would have meant cycling further and further away from our host family for the evening, so just before we set off, we decided to just do 75miles, which still meant driving 40miles back (it’s a matter of saving money, because the RV guzzles so much, averaging about 7miles to the gallon). We’re so fit now that 75miles feels like a recovery ride, or a rest day. We cruised along, entering Georgia (our ninth state) very early on.

A treat came as we were about to stop for lunch when a car went by with some familiar but out-of-context faces in it. Bob and Lynn Lawrence, with their son Newman and wife Trish, were returning from a family holiday, and so they stopped off for a lovely bonus lunchtime chat. 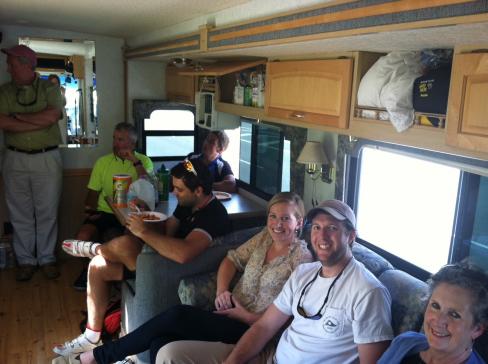 Burundi has deeply impacted them as a family. Bob returned from his first visit and used to sing a Kirundi song each morning to Lynn when they woke up. Newman and younger brother Will Henry both went out and were very touched, and now Newman and Trish are heading out for two years to work in Uganda. I love how Burundi blows people away beautifully, and has a unique impact on those who experience it.

So we finished early, and headed back to Valdosta to a business friend of Ron’s called Brian. His wife Chris greeted us and was shocked because she’d been expecting nine Africans – that’s what Brian had told her, but we are all very definitely Caucasian! They have this humoungous property and I’m ensconced in the pool house. We’ve enjoyed their hot tub (I almost shouldn’t tell you this because you might think we’re having too good a time), and I beat up Ron in the pool in punishment for the transparent boxers episode. 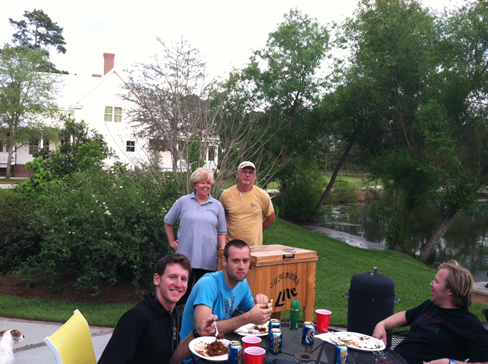 We’ve just finished an incredible BBQ supper, with a few more thousand calories to add to the bank, which culminated in John and David embracing a $100 wager (by the Florida boys) to swim across the snake-infested lake. John took the prize, gallantly shared $20 of the spoils, and instead of a winner’s floral garland he picked up some nice green algae along the way. I’m glad the snakes didn’t surface, because we were debating who was more expendable. John’s the only one who can drive the RV, so is pretty crucial to the cause, and David’s going to produce an amazing documentary, so is likewise integral. Who would you have prioritized? More importantly, referring back to earlier, on more significant issues, what are you prioritizing…?

Off for a last late-night soak in the hot-tub, with a team meeting to discuss whether to go for a big 150miler tomorrow, or settle for a mere century. See you tomorrow, sleep well! 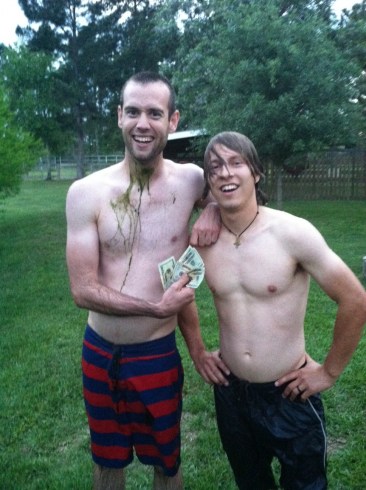