Many of you have written, asking for latest news on the floods that struck a few nights ago. I was in the USA at the time and have just returned to Burundi. With permission, I’m sharing some dear friend’s prayer email and pictures. Latest casualties range from 77 to 120 dead. Do pray. A number of us are trying to respond to the crisis – any financial contributions to us on this will be directed to Jesse and his gang (www.greatlakesoutreach.org/donate and mark ‘flood’):
Dear praying friends,

When I visited the disaster area yesterday, the devastation was on a much larger scale than I could have ever imagined.  It was not your typical flood with rising water levels, but more like a tidal wave, or a tornado.  Because of the steep slopes, there is no standing water, just a 1/2 mile wide path of devastation: the entire area is buried in 4-6 feet of rock, mud & debris, including massive palm tree trunks, and giant stumps and roots.  The area looks like a dry river bed, but no river has been there before. 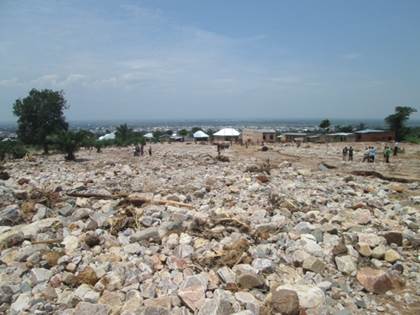 (The area in the photo used to be filled with houses. There is hardly a trace left). What happened is that culverts under the main road that snakes along the mountainside to northern Burundi got damed up in several places with debris and huge swirling lakes built up behind it until several tidal waves of boulders and water poured over the road and down onto the neighborhoods below.  There was no warning.  It reminded me of a tornado because of some of the randomness of the devastation: entire houses were gone, while a meter to the right or left a house would be completely untouched. The circles in the picture below are the spots where houses used to be.  They are completely gone, but the house to the right is untouched. 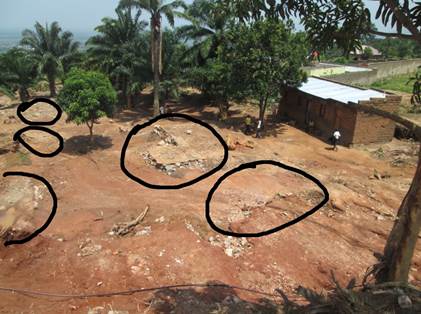 Depending on the type of soil the house was built on, or what type of construction was used, some houses fared better than others. 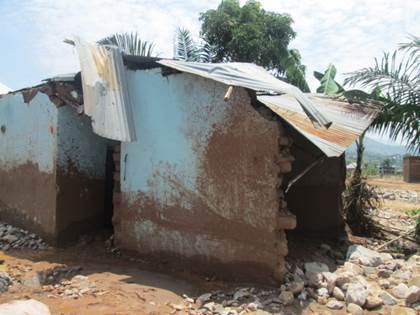 The wall of water was at least 10 ft high in some places.  Others were trapped inside their houses as mud and rocks kept doors from being opened. 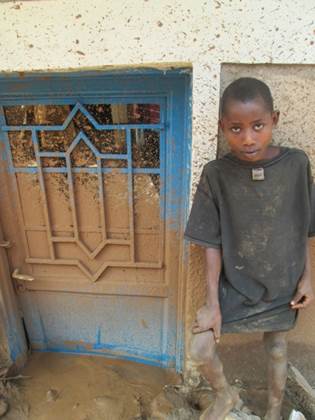 The traumatized survivors recounted the impossibility of the choice they were faced with: stay inside their houses in four to five feet of water, (standing on a table or bed or chairs) risking the possibility of the house collapsing on them, or stepping out into the current of water, rock, and mud flow that might sweep them away. 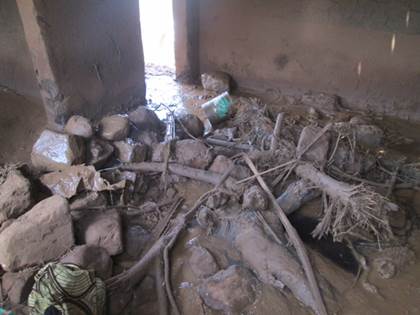 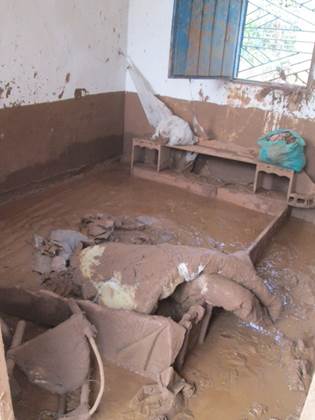 Many families braved the waters knowing their homes would likely be death traps, but many were injured as a result.  They were of course carrying the youngest children but children between 6-12 make up a majority of the victims that were swept away as their parents were unable to carry them, with arms already full with younger siblings, but these children were not strong enough or tall enough to make it to higher ground.   One of the Discovery School teachers had a 12 year old daughter who was swept into the water but managed to survive by clinging to a tree. Most of the adult victims died when they were buried with their families when their houses collapsed on them. 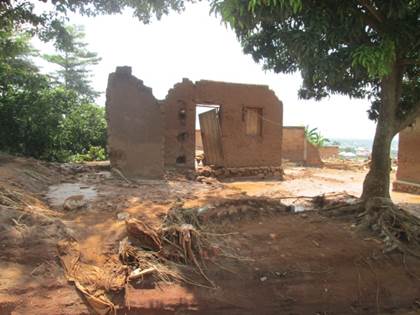 The Gatunguru Emmanuel church where I have been teaching Bible study every Thursday is right in the middle of the disaster zone, however, because it was built on slightly higher ground, the building was spared, with houses on either side of it being demolished.

Many people fled to the church building, which helped save many lives.  They were able to shelter there for the night, and it will be the center of operations for our relief efforts.  We have now learned that at least 7 church members died, and over a dozen church families lost their houses, however, the numbers could still go up as we learn more information.  I will post more pictures to an online album and send you all the link (warning: the pictures include some less than pleasant ones). I will also be sending out information about how you can help, should you desire to do so.  Most of all please pray!  For the victims, for sure, but for us as well, as this comes at a time when we were already dealing with several other weighty issues that have yet to be resolved.

In His service, Jesse and Joy Johnson.