Warning: some of the pictures below are pretty gruesome. Some would say I shouldn’t include them (I have omitted the most graphic one). But actually sometimes it takes the pictures to stir to action, and brave Anesie’s battle is still ongoing. I see part of my very broad role in Burundi as telling these stories to enlist others’ help, and also to show the breadth of work and of the folk involved out here in trying to bring hope, healing and restoration in the nation.

Yesterday I got to see Anesie for the first time in over a year. 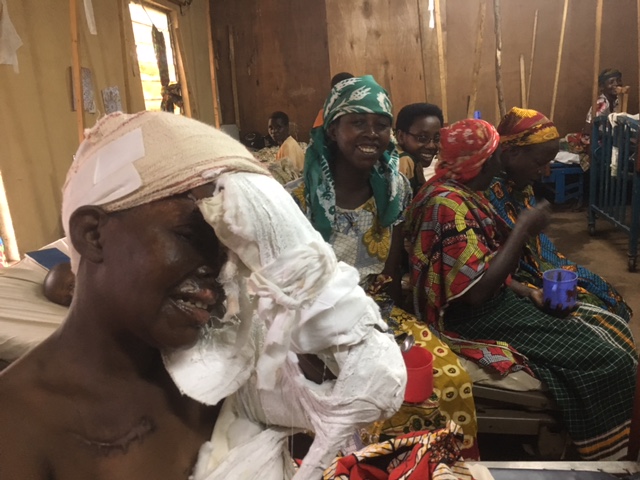 Yesterday in the ward, trying to smile, with her carers behind her

It’s half-term break right now, so I took the family up for a few days to Kibuye to a mission hospital to spend some time with a very special bunch of people. They are a growing team of doctors and administrators from North America who have committed to work together in community and build up a teaching and resourcing hospital for Burundi and beyond. They’re in it for the long haul, talking in terms of decades of engagement rather than years. Their remarkable story can be read here.

Back to Anesie. Some of you followed her horrific story from three years ago. Her boys smelled meat cooking on the fire as they returned home, only to make the horrific discovery that it was their mother’s head burning away after she’d had an epileptic fit and passed out in the coals. She was taken to a hospital which tried to treat her for six months, but eventually gave up and discharged her, saying there was nothing else they could do. Josh and Nadine, who founded Shammah Health Center (under our partner YFC), took up the story in April 2014 (full story on their blog):

“She then visited a priest located in Gitega for treatment. He made a paste of what we can only guess was made out of honeycomb, dirt, and possibly even feces, and covered her wounds with it. He prayed over her for healing and told her to come back to him in a few days, and gave her unnamed ‘medicines’ for treatment. When Anesie presented back to him with pus pouring out through the paste and down her face, he must have realized he was out of his depth. He put her in his car, and literally dropped her off at our health center gate, driving away before anyone could identify him…”

Josh and Nadine took care of her before connecting her with our Kibuye friends, and fast forward two and a half years, and a staggering eight further surgeries, she is still keeping positive on her very slow road to recovery. They managed to salvage some sight out of one eye, whilst the latest surgery has involved taking a strip of skin from the underside of her arm and grafting it onto her forehead, but the skin has to stay attached to her arm for three weeks for it to take hold. So she is in a caste to keep her arm joined to her head for the next three weeks. We were always amazed at her sprightliness, and even now in her pain she managed to try to laugh with me.

I asked the surgeon, Jason, how much those surgeries would have cost in the US. We’re talking hundreds of thousands of dollars. Yet here, her bill is only a few thousand dollars. Of course Anesie is penniless. 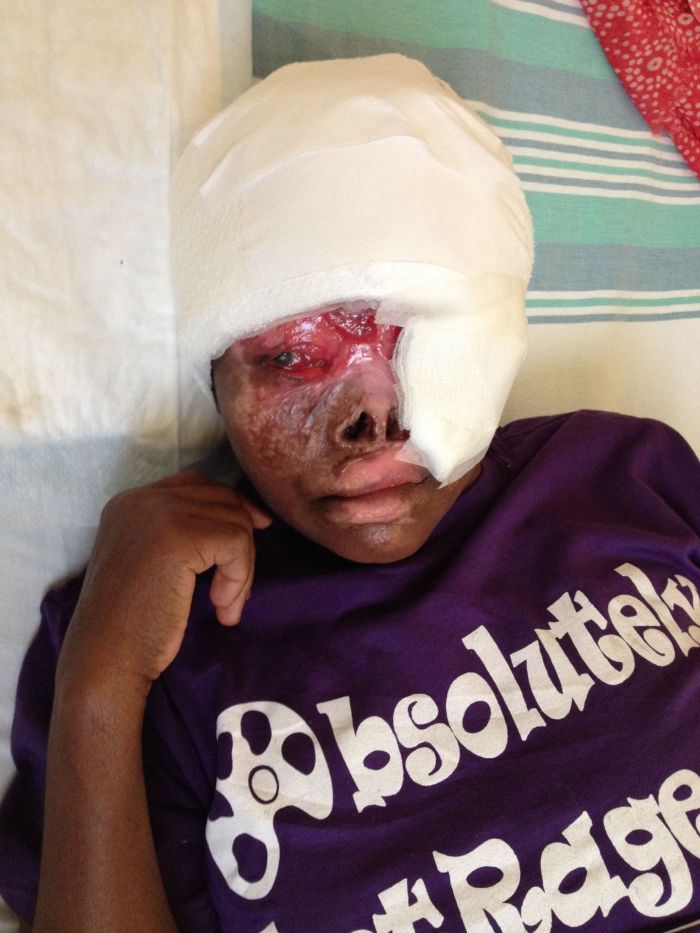 I cannot imagine what she has felt like these last three years. Many gave up on her. But Josh and Nadine didn’t, and then surgeons Jason and John didn’t, the nurses didn’t, and of course God doesn’t.

So it’s a story of personal disaster but perseverance through the pain, and also of God’s people working together and giving their best to help one of the last, the lost, the least… Their motivation? As Matthew 24:40 says: ‘Truly I tell you, whatever you did for one of the least of these brothers and sisters of mine, you did for me.’ 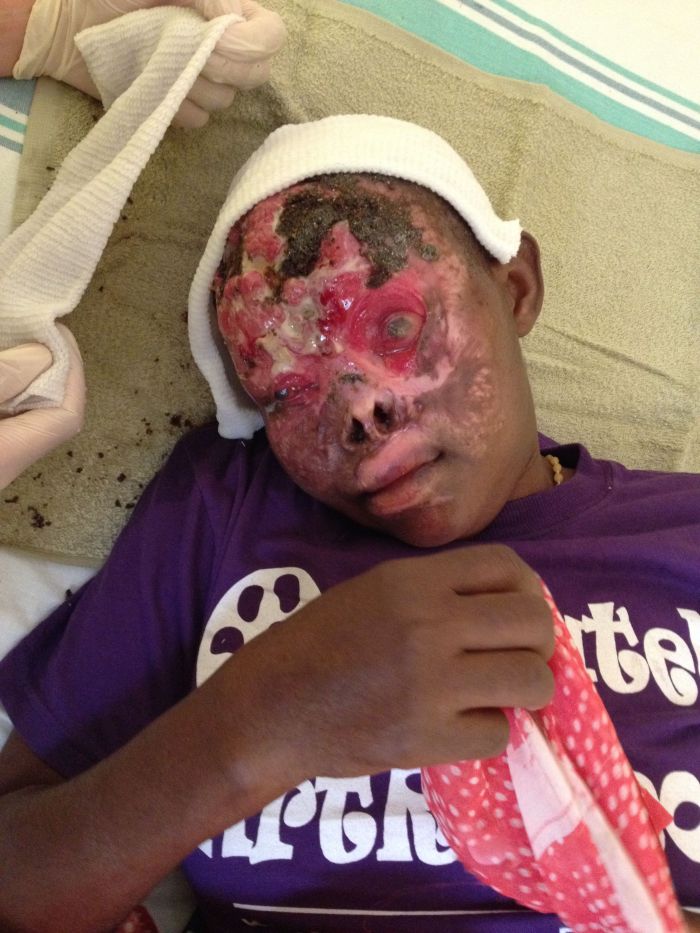