We returned two weeks ago in time for Lizzie’s ailing Mum Rosemary’s 80th birthday, during which we went out for a very special celebratory ice-cream. Her condition quickly worsened and after spending most of last week in hospital, she graduated to glory in the early hours of Monday morning. She’d wanted to make it to her other daughter Sarah’s wedding on the 23rd of this month, but in the end it wasn’t to be and she has been released from her substantial pain. We are so grateful to have been in country and now to be able to be with and help Gramps (David). There will be a Thanksgiving service for Rosemary at Highfield Church at 230pm on Wednesday 13th July, to which all are welcome. 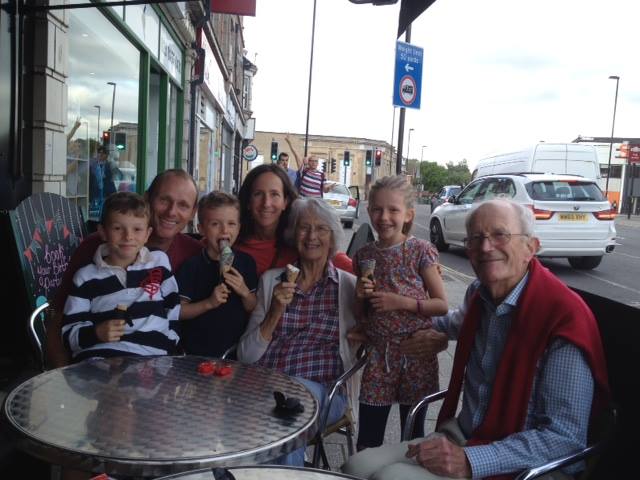 It’s been beautiful to read Facebook comments and receive letters expressing gratitude and fondness for Rosemary’s life and the impact she had. She’d been a nurse in India, where she met David. David’s job as vicar then took them to Kent, and then onto Manchester, before spending their retirement very actively in Southampton. I am so hugely grateful to her and David for their total support to Lizzie and me in our call to Burundi, they have been amazing grandparents. And of course, without her and David, I wouldn’t have landed Lizzie!

And on a lighter note for your amusement (I know Rosemary enjoyed it), here’s sharing one of my favorite recent family pictures. We had a horrible journey back from Burundi, which included four flights, and two of the three children vomiting countless times, beautifully decorating my sweatshirt amongst other things. I myself was battling malaria and/or amoebic dysentery (was taking meds for both) and thankfully didn’t leave a mess on the plane, holding out until back in the UK, whereupon within five seconds of sitting in my kind friend’s vehicle, which he’d committed to lend to me, I’d lost control of my faculties and it was a veritable shitastrophe! Meantime, Lizzie had driven another car back to Southampton with more pukings in the mix, and arrived without access to the place where we were staying. So below shows the wreckage of the Guillebaud clan, with Grace passed out on the grass verge, and Zac sprawled on the roof of the car, inside which Josiah was fast asleep. The joys of family travel – we can laugh about it now! 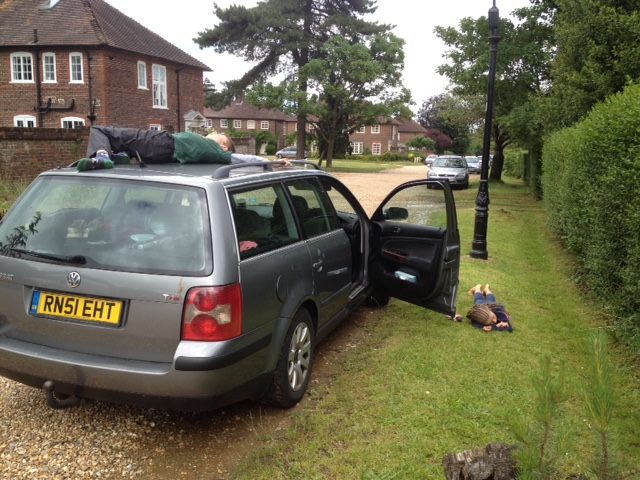