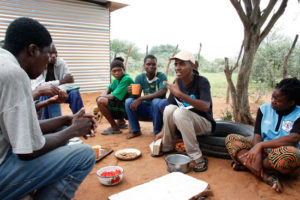 A famous witchdoctor called Makari received what he thought were prospective ‘clients’ into his den. His reputation went before him and so our evangelists wanted to challenge his authority. When they revealed their identity, the power of God came on him and he fell to the ground. When he came to, he sat and listened to their preaching. He believed in Jesus and asked them to return two days later when he would burn all his charms publicly. When they duly returned, they found Makari had invited all his relatives and other witchdoctor friends. He declared before all of them that he had turned to Christ, and proceeded to burn his charms. At that point our team preached and a further fifty people decided to follow Christ! Makari is now a member of Emmanuel church, along with his family.

In Isale, a team of evangelists went to share the gospel in a bar. While they were talking, a young man became very angry with them. The following day, this antagonistic man came to see them, and gave his life to Christ. He then told them that when they were preaching in the bar he had been about to beat them, but when he had tried to stand up to attack them, he had felt a mighty hand jamming him down in his chair, and that undeniable power is what forced him to surrender his life to Jesus.

Young Libere was on one of our teams in Busiga. He’d never seen a healing miracle. And yet, he found himself witnessing to an old woman who had been paralyzed for three years. He sensed the Lord telling him: “Miracles accompany the preaching of the Word.” So he responded in obedience and faith, and commanded the lady to stand up. She stood up immediately and started dancing with joy! Libere was amazed to see the power and faithfulness of God. He exclaimed: “Now I believe that God is powerful and can work with whoever believes in him regardless of his age or denomination. I will spend the rest of my life proclaiming the love of God.”

The above are just a sample of literally hundreds of stories from outreaches undertaken by Harvest Initiatives over the last twelve years. And as of tomorrow, for the next two weeks(4th-18thAugust), we are sending out another 600+ evangelists across the countryfor our annual summer campaign – my favourite activity of the year, and no doubt one of the most beautifulKingdom ventures taking place on the whole planet at this time.We anticipate 1000s of people encountering Jesus and choosing to follow Him.

So this is a plea to pray – daily if you can for the coming fortnight – for our guys to be bold, sensitive, healthy, anointed, effective, united, holy, protected, etc. Interestingly, the one year (of the last twelve) that I didn’t seek massive prayer back-up for this outreach, we experienced much more persecution and logistical problems. So all the more PLEASE PRAY!

I look forward to sharing with you again in the coming days some more stunning stories and statistics of God at work in beautiful Burundi.