PLEASE READ THIS, IT IS VERY SIGNIFICANT NEWS:

My beloved nation has blessed me beyond imagining – and I don’t use that as a cliché.

I came as a single young nutter expecting to die before the age of thirty, and I now leave a balding mature-ish husband and father of three children! I came with dreams to see thousands come to Christ, and we were able to raise a movement that saw hundreds of thousands become followers of Jesus. I came to work under Scripture Union, but in the end we founded Great Lakes Outreach (GLO), and helped launch and consolidate eleven nation-shaping organisations. Wow, it has been an amazing journey.

And amidst tears, this chapter of living and working together as a family in Burundi has just come to an end – tears mixed with both joy and sadness. It’ll be hard to develop relationships of similar depth as those fostered by times of listening to gunfire and shelling together, braving dangerous roads together, or suffering together. Life has been so raw, exciting, and varied. The beautiful fruitfulness of our work has been so encouraging, gratifying, and energising.

Yet with total God-given peace we recognize our time is up. The educational needs of our children mean a new chapter is opening up. We’ll embrace some very different challenges in due course, but the main one is to seek to live lives of authentic, passionate, and costly worship of God in a very different context.

Anyway, I want to tell you why Great Lakes Outreach, as the title suggests, is GLO-ing from strength to strength. 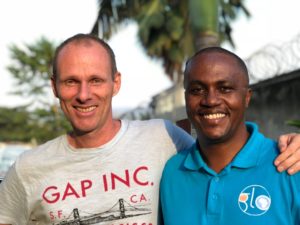 Some stories you couldn’t make up:

In 2013, I approached an extraordinary pioneer and founder of one of our key partner organizations, Harvest Initiatives (or ‘Harvest for Christ’ as was), to sound him out as to whether he might consider taking over the baton of running GLO for me in due course. My vision and dream scenario was for a Burundian to run GLO, not another white man – one of my mantras has always been that a missionary’s job is to do himself out of a job. So I put it to Onesphore, and he seemed open to the idea – or so I thought. Actually though, it turns out he himself was looking to hand over Harvest, but, as he put it, “In my pride I wanted to start another organization. I was a pioneer leader, and didn’t want to work for anyone else. So I was flattered by Simon’s offer but was thinking I would decline it.”

Little could we have imagined how clearly God would speak to him!

The pastor of a small independent church decided to fast for forty days. His name was Joseph. Four of his five children had been radically transformed from intransigent rebels to dynamic leaders under Onesphore’s influence. So in gratitude, Joseph wanted to seek the Lord and use those forty days to fast and pray for Onesphore. At the end of his fasting, Joseph was so weak, but he summoned Onesphore. Without knowing that the latter was considering leaving Harvest, nor having ever heard of me, Joseph gave him the following message:

“The Lord is bringing you to a new season of change. You are going to leave your own organization. He has given you a twin called Simon, and you are going to work together to transform the nation!”

Onesphore and his wife listened to the pastor and knew that it was God’s voice. Although he wanted to do his own thing, he submitted, and from the crisis in 2015 when it all kicked off in Burundi again, he has played a key role in leading GLO’s network and expanding it further, drawing in another dozen-or-so organisations. I can’t tell you some of the impacts we’ve had, because it’s just too sensitive to put out in the public domain, but suffice to say it’s been very strategic and significant, and Onesphore is clearly God’s chosen instrument to take GLO further than I could or would have.

Thank you Lord! More than my dream scenario…

So, how will it work? Onesphore is National Director of GLO, running everything inside Burundi; and I am International Director, spending my time supporting him at a distance, preaching, travelling, networking, fundraising, etc, all still with empowering and equipping the Burundian Church in mind.

If you felt connected with the Guillebaud family’s journey in Burundi, and were therefore considering stopping supporting GLO with our departure, can I urge you to keep on journeying with Onesphore and the beautiful network we have developed together by God’s grace? We need and want you more than ever! Are you in? I hope so!

Thanks so much for all your support thus far.

P.S. Before settling in the UK in August 2019, we will spend ten months from September as a family traveling in 33 countries. I can work remotely, and we will home/world-school the kids and have a crazy adventure together, with me preaching along the way and flying the Burundi flag.