Jean is dead. I’ve just got back from his funeral. What a man!

He was Scripture Union Burundi’s first staff worker in 1976, and finished his race back with us after slipping into a coma last week, aged 63. Fabulously, in terms of a sense of God-ordained wholeness or completion, as leader of our Department of Biblical Studies, he had just handed in the whole manuscript for the nation’s Bible-reading notes for the coming year to SU boss Etienne. He gave it to him, with a huge smile, and a sick note, and said: “Boss, I’m so happy. The job’s done. Now I need some time off as I’m sick.” Little did any of us know that a few days later, he’d be graduating to glory!

From morgue to church to burial site to reception, about 2,000 of us paid tribute to this quiet, funny, gentle man of God. We braved the heat for six hours. My shirt completely changed colour because of the sweat. It was exhausting, but a precious holy day.

During the numerous speeches honouring his life before his wife, 110-year-old father(!) and blind stepmother, the same theme kept reoccurring: faithfulness. Jean was a faithful follower of Jesus. He never aspired to being a Bishop. He resisted all the temptations and justifications as Diocesan Treasurer to feather his own nest. He sacrificed himself decade in decade out for those around him. What a man! 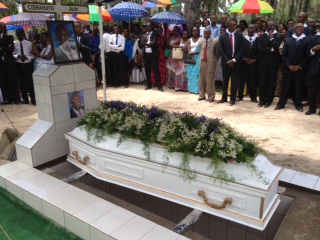 (Jean about to be laid to rest, in the sweltering heat – umbrellas for the sun, not the rain)

His first wife died, and he then married her younger sister. So he has three older children, and three younger ones.

Here’s the rub. Because of his faithfulness, integrity, and sacrifice, Jean didn’t enrich himself in any way. He died poor. A few months ago, he actually wept over his impending retirement and not being able to provide for his family. His youngest daughter, Sarah, is seven. I watched her throughout today. Stunned. Confused. Bewildered. Will she be able to continue her schooling? Will any of them? How will they survive? Because out here there’s no social security, no pension, nothing. 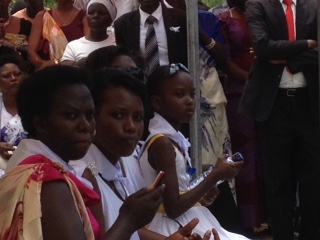 (Jean’s widow in the foreground, and little Sarah on her sister’s knee)

God, how will you honour Jean, who honoured you?

I think He’ll do it through those of you reading this. I invite you to accept the privilege of giving something to help sustain this family. I reckon a few grand would mean they could start a small business to pay the bills and keep precious little Sarah at school.

If you want to help, ping an email to Len@greatlakesoutreach.org. God bless you!

What an honour, to be part of God’s honouring of John!