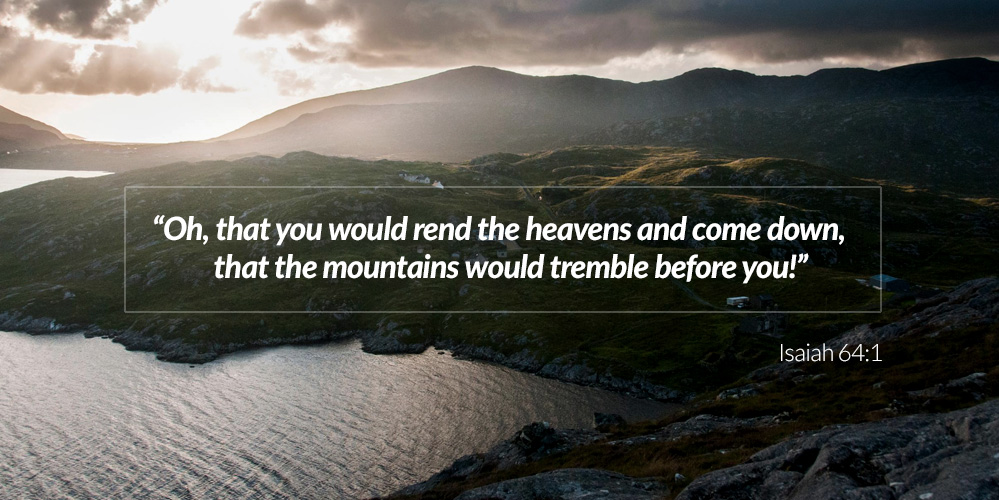 ‘Lord, I have heard of your fame; I stand in awe of your deeds, Lord. Repeat them in our day, in our time make them known; in wrath remember mercy.’ (Habakkuk 3:2)

Sunday’s sermon at Holy Trinity Cheltenham can be viewed below. The covid limitations and seating restrictions were a little strange, but it was good to be back in a church, and we had a powerful time.

Below is some of what I shared:

A few years ago I flew to the Hebrides to speak at a number of meetings. It was great to go to places I’d read about from the 1949-52 revival there, and even talk to a surviving old man and ask him questions.

The revival was steeped in prayer. Seven men and two old ladies had decided to pray and not stop until God visited them in a powerful way. One night, at a prayer meeting held in a barn, one of them said, “It seems to me just so much sentimental humbug to be praying as we are praying, to be waiting as we are waiting here, if we ourselves are not rightly related to God.” He asked God to reveal if his own hands were clean and his own heart was pure. Suddenly God’s awesome presence swept the barn. They came to see that there was a direct correlation between revival and holiness. A power was let loose that night that shook the island. A man arrived and felt compelled to go to church and get right with God. People had visions in their own homes.

Duncan Campbell had been preaching at a conference in Bangor, Northern Ireland. He was due to stand up and preach when the Lord told him to leave immediately and go to Lewis. He told the man who had invited him that he simply had to go. Arriving as soon as he could in Lewis, he found that they were all waiting for him!  The stories are truly extraordinary.

Campbell shares: “Over 100 young people were at the dance in the parish hall and they weren’t thinking of God or eternity. They were there to have a good night when suddenly the power of God fell upon the dance. The music ceased and in a matter of minutes, the hall was empty. They fled from the hall as a man fleeing from a plague. And they made for the church. They are now standing outside. Oh, yes – they saw lights in the church. That was a house of God and they were going to it and they went. Men and women who had gone to bed rose, dressed, and made for the church.

At another meeting, “suddenly, the power of God fell upon the congregation. Of course in Lewis and in other islands of the Hebrides, they stand to pray, they sit to sing. And now, one side of the church threw their hands up like this. Threw their heads back and you would almost declare that they were in an epileptic fit, but they were not. Oh, I can’t explain it. And the other side they slumped on top of each other. But God, the Holy Ghost moved. Those who had their hands like this stayed that way for two hours. Now you try to remain like that with your hands up for a few minutes and you will find it hard – but you would break their hands before you could take them down. Now, I can’t explain it – this is what happened. But the most remarkable thing that night was what took place in a village seven miles away from the church. There wasn’t a single person from that village in the church. Not one single person. Seven miles away, the power of God swept through the village. Swept through the village and I know it to be a fact that there wasn’t a single house in the village that hadn’t a soul saved in it.”

The stories go on: “A schoolmaster that night looking over his papers 15 miles away from this island on the mainland suddenly was gripped by the fear of God. And he said to his wife, “Wife, I don’t know what’s drawing me to Barvas, but I must go.” His wife said, “But it’s nearly 10 o’clock and you’re thinking of going to Barvas. I know what’s on your mind, I know that you are going out to drink and you are not leaving this house tonight!” That was what she said to him – he was a hard drinker. And he said to his wife, “I may be mistaken, oh, I maybe mistaken, but if I know anything at all about my own heart and mind, I say to you now that drink will never touch my lips again.” And she said to him, “Well, John, if that’s your mind, then go to Barvas.” And he got someone to take him to the ferry, someone to ferry him across, and I was conducting a meeting in a farmhouse at midnight and this schoolmaster came to the door and they made room for him and in a matter of minutes he was praising God for salvation. Now that’s miracle. I mean you cannot explain it in any other way.”

Campbell came for ten days but stayed for two years.

“Will you not revive us again, that your people may rejoice in you?” (Psalms 85:6)