A story from last week:

“A young married woman had left her husband to move in with her mother-in-law. She was demon-possessed and all the regional witchdoctors they consulted couldn’t set her free. Our team showed up, prayed for her, and delivered her. She returned to her own home, and came back the next day with all her charms to burn them. Four people decided to follow Jesus on the back of this miracle.” 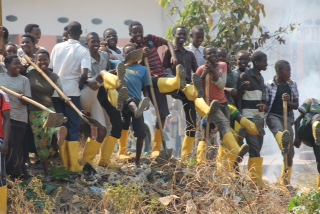 This year’s outreach could not have been more challenging. It was a victory in itself that it went ahead at all. In the end, 582 evangelists visited fifteen of Burundi’s eighteen provinces, and made the best of what were at times tense and dangerous situations. Due to the crisis in the nation, local communities were wary of outsiders coming in, presuming in many cases that our guys were sent by the government, and so often it took a few days to gain acceptance.

Teams rebuilt damaged roads, made bricks, helped in whatever way they could in the local communities, and then in the afternoons visited houses, showed films, prayed for the sick, and more. One of our groups was arrested as suspicions ran high about their motives, but by the end of the week the local police actually provided boots and gloves for their road-clearing efforts and trucks to take away the rubbish.

On the Thursday, at two hours’ notice, the President’s investiture took place. It was meant to be six days later, but was a way, many think, of wrong-footing the opposition who had declared that they wouldn’t take things lying down come the 26th August deadline. That has passed now, and as yet things have been relatively quiet (although two people were killed last night). So on that day police were everywhere, the population was fearful, and our teams’ movements were very limited.

In the end, over 400 people decided to become followers of Jesus during the various outreaches – far fewer than previous years but more than if we hadn’t gone ahead with the outreach at all.