The Dead Sea is dead because water runs into it, but doesn’t run out of it.

That’s not to say, in any way, that the Burundian Church is dead – far far from it – but in terms of cross-cultural mission to the nations, it has received for a long time within Burundi without taking the gospel out beyond its borders, and that has been unhealthy and wrong.

Our historic national congress was nearly a year in the planning, and it went superbly well. We wanted 250 attendees, hand-picked for their influence or their active engagement already, but in the end 348 came. They represented almost all major players across churches and para-church organisations, and from all provinces.

The content of the talks was of the highest level. Ross Paterson shared how the Jerusalem church grew and grew, but was ultimately disobedient to the great commission to make disciples of all nations. They stuck to Jerusalem and to their own tribe. So God chose a bunch of unnamed anybodies from Antioch (Syria) to be the vehicle to take the gospel to the whole world. And that included folks from Cyrene (Libya) who went to Antioch, so Africans were there from the start at the key moment, responding in obedience to God’s call to the nations.

Most churches are Jerusalem churches, although we are called to be Antioch churches.

Burundi’s time has come. Burundians are adaptable, long-suffering, low-maintenance, good at languages, unashamed and passionate in their faith i.e. much better able to be effective on the mission field than many from the West. And countries are wary of Westerners in a way they are not of Africans who can enter their nations on student visas, as businessfolk or NGO workers.

That’s what we wanted to communicate, envision, and mobilise for. After my closing address, about fifty people came forward, who had counted the cost and were prepared to go. We all sensed what a momentous time these three days were. We’re all excited as to where it will lead, whilst being fully aware that we need to press forward and not let the momentum be lost. Do pray with us for wisdom and action in moving forward. 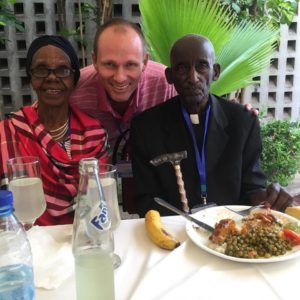 On a lighter note, these two 90-year-olds came. He spoke briefly, thanking our family for having brought the gospel to Burundi in the first place. My great-grandfather had led him to the Lord. He testified to loving life, loving his wife, being so fulfilled and grateful to Jesus, and he closed with blessing the Guillebauds as follows:

“May you be fruitful like the banana that reproduces greatly without needing a husband!”

My parents, two aunts, and uncle were here for the congress, and we went down to Matana, where my great-grandfather was buried in 1941. The commemorating plaque from that time read ‘Imbata ya Yesu’, which meant at the time ‘slave of Christ’ but with the language evolving, it now means ‘duck of Christ’! 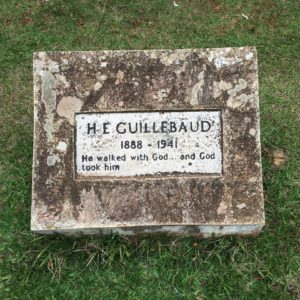 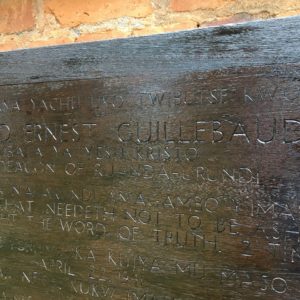 Here’s to moving from Jerusalem to Antioch and beyond…