Below is Kyle Idleman’s recounting of my favorite Jesus encounter, in Luke chapter 7, from Kyle’s book ‘Not a Fan’. It’s quite long but worth the read, and I include it now because my next post tomorrow will be about what happened when I paid for sex last weekend. 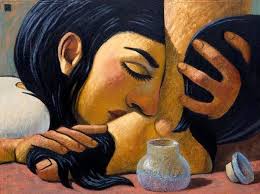 Luke 7: 36 When one of the Pharisees invited Jesus to have dinner with him, he went to the Pharisee’s house and reclined at the table. 37 A woman in that town who lived a sinful life learned that Jesus was eating at the Pharisee’s house, so she came there with an alabaster jar of perfume. 38 As she stood behind him at his feet weeping, she began to wet his feet with her tears. Then she wiped them with her hair, kissed them and poured perfume on them.
39 When the Pharisee who had invited him saw this, he said to himself, “If this man were a prophet, he would know who is touching him and what kind of woman she is—that she is a sinner.”
40 Jesus answered him, “Simon, I have something to tell you.”
“Tell me, teacher,” he said.
41 “Two people owed money to a certain moneylender. One owed him five hundred denarii, and the other fifty. 42 Neither of them had the money to pay him back, so he forgave the debts of both. Now which of them will love him more?”
43 Simon replied, “I suppose the one who had the bigger debt forgiven.”
“You have judged correctly,” Jesus said.
44 Then he turned toward the woman and said to Simon, “Do you see this woman? I came into your house. You did not give me any water for my feet, but she wet my feet with her tears and wiped them with her hair. 45 You did not give me a kiss, but this woman, from the time I entered, has not stopped kissing my feet. 46 You did not put oil on my head, but she has poured perfume on my feet. 47 Therefore, I tell you, her many sins have been forgiven—as her great love has shown. But whoever has been forgiven little loves little.”
48 Then Jesus said to her, “Your sins are forgiven.”
49 The other guests began to say among themselves, “Who is this who even forgives sins?”
50 Jesus said to the woman, “Your faith has saved you; go in peace.”

In the Bible, Pharisees knew about Jesus, but they didn’t know him. Jesus said of them in Matthew 15:8 “These people honour me with their lips but their hearts are far from me.”

In Luke 7, Jesus had been invited over for dinner by one of these Pharisees, Simon. For Simon, inviting a guest rabbi was a matter of considerable religious merit. Jesus should have been the guest of honour but it quickly became apparent that Simon was spending time with him out of duty instead of a desire to honour him.

There were certain rules of etiquette at such dinners. The customary greeting for honoured guests would be a kiss. If you were of equal social rank, then it would be a kiss on the cheek. If it was an especially high honour, you would kiss your guest on the hand. To neglect it was the equivalent of openly ignoring that person. It would be like someone coming to your home and not even acknowledging their presence.

More etiquette in the Middle East involved the washing of feet. It was mandatory before meals. If you truly wanted to honour your guest, you could do it yourself as host. If not, you would have your servant do it; or at the very least you would give water for them to do it themselves.

Finally, for a very distinguished guest, you might provide olive oil for anointing their head. It was inexpensive, but still it would be an especially hospitable gesture.

However, when Jesus is at Simon’s house, there’s no kiss, no foot washing, and no oil. These were not accidental oversights, but quite deliberate. Jesus was being ignored and insulted.

Notice the irony of the moment. Simon had spent his whole life studying the Scriptures. By the age of 12, he had memorized the first 12 books of the Bible, by 15 the entire Old Testament, including more than 300 prophecies about the coming Messiah. Yet he doesn’t realize before him is the Messiah whom he hasn’t kissed, whose feet he hasn’t washed and whose head he hasn’t anointed. He knew all about JC, but didn’t know him.

The problem is, like the Pharisee in Luke 7, you could confuse knowledge about Jesus for intimacy with Jesus. Do you know the books in the Bible?  Let’s try with the New Testament…


The truth is, Jesus doesn’t care if you can or can’t list them all off from memory. He’s not impressed with my knowledge or talent. Admittedly, I wish he was. On Judgment day it would be great if he said, right, list them off and you’re in. Otherwise, go stand over there. No, I don’t think it’ll be like that. But maybe a number of us do think that. It’s not about not drinking, not cussing, etc.

It’s about intimacy. The best biblical word for intimacy is the word ‘know’. It’s much deeper than knowledge. Genesis 4:1 ‘Adam knew Eve his wife’ (KJV). It’s the Hebrew word ‘yada’ – defined as to know completely and to be completely known. Now the NIV translates it in modern English as ‘Adam lay with his wife’. You get what yada means, it’s way more than knowledge. Don’t giggle, this is not a yada yada yada moment. This is a YADA moment between man and wife, it’s an intimate connection on every level. To know and to be known completely.

It’s a beautiful picture of what it really means to know Christ. Other Hebrew words could have been used to describe sexual intimacy, or for referring to the physical act of procreation, but the word in Genesis 4:1 is ‘yada’, the Hebrew word to ‘know’. So clearly when the Bible uses this word for ‘know’ it means more than knowledge. It describes the most intimate of connections.

If you trace the usage of ‘yada’ through the Old Testament, you find over and over it’s the same word used for God’s relationship with us. ‘Yada’ is used to describe how God wants to be known by you. That’s the way he already knows you. In Psalm 139 – check it out – you see it used five times in the first four verses.

Think about it: it’s the same word as the one used between man and wife! It’s the same word, the same connection, He knows you and wants you to know Him. That might just totally change how you define your relationship with Jesus. Instead of identifying yourself as a follower of Jesus based on what you know about Him, you now understand you’re a follower because/if you ‘yada’ Him.

In Luke 7, the Pharisee knew all about Jesus but didn’t know him. His heart was far from Jesus. He didn’t know that the visiting rabbi sat at his table was the promised Messiah that he’d spent countless hours studying about.

Then Luke tells us a woman comes on the scene whilst they are still eating. They are likely eating in the courtyard area where people could watch and even listen in on the conversation. Things get awkward as she comes up uninvited to table. It’s really awkward because verse 37 says she’s a ‘sinner’, i.e. a known prostitute in the village. Maybe she heard him earlier in the day, and something happened in her heart.

What had he said? Maybe something on forgiveness. Her eyes welled up as she discovered that God actually loved her, wanted to forgive her, to ‘yada’ her in a clean pure way. Maybe she realized Jesus could put the broken pieces of her life back together. Or maybe it wasn’t his words, but how he looked at her, and communicated worth and value. She wasn’t just a ‘sinner’ to him but a beloved daughter. Perhaps when Jesus finished she knew God still loved her, it’s not too late, even someone like me can follow Him.

So she was desperate to see him again. Maybe she overheard someone saying he’d be having supper at the home of Simon the Pharisee – a dinner she’d never be invited to. She knew it was a place of condemnation and judging. But no, she just had to see Jesus again. And it took real courage to enter that courtyard, but she’s so focused on Jesus she forgets about herself. She’s desperate to express the love and affection she has for him. What she does next is impulsive and reckless – inappropriate even – and in fact it shows she’s just the kind of follower Jesus wants.

Picture the scene: Jesus is reclining at the table. Instead of chairs, people lean on their elbow propped up on a cushion. Their feet are away from the table. The woman approaches and stands at the filthy feet of Jesus. The table grows silent. Everybody is watching. Everybody knows who she is. What is she doing? She looks around at the guests. She feels from some that familiar glare of condemnation. Others keep their eyes down, embarrassed by her presence and the awkwardness of the moment. But when she looks at Jesus, he seems to know what has happened in her heart. He gives her a warm smile. He seems delighted that she has come, and he looks at her with the eyes of a loving father watching his beautiful daughter as she enters the room. She has never had a man look at her that way before. She is so undone by this that the tears come, just a few at first, and then more.

She falls to the ground and begins to kiss his feet. Soon, the tears are just pouring down her face. They begin to drip onto the dirty feet of Jesus. As she looks at the muddy streaks she suddenly realizes that his feet haven’t been washed. She can’t ask for a towel. So she lets down her hair. In those days women always wore their hair up in public. For a woman to wear her hair down in front of a man that was not her husband was considered to be such an intimate expression that it was literally grounds for divorce. She lets her hair down in front of Jesus and there was likely an audible gasp. She begins washing the feet of Jesus with her tears and drying them with her hair.

Then Luke says she had an alabaster jar of ointment. Most likely this refers to a flask that was often worn around the neck as a kind of perfume for women. As you might guess, because of her profession, this flask was quite important. She had used it a drop at a time many many times for many many men. But now she empties it. She just empties the whole thing out. She will not need it anymore. She pours this flask – her life – on his feet, and she kisses them over and over. At the end of the story, we read:

In the end the religious leader with all the knowledge is shown to have missed it. The prostitute who intimately expressed her love for Jesus gets it. So a question for us:

47 Therefore, I tell you, her many sins have been forgiven—as her great love has shown. But whoever has been forgiven little loves little.” 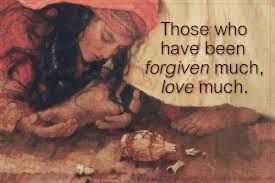