If you get cancer in Burundi, you die (unless you can find and and then pay for one of the few surgeons in the country to surgically remove it in its entirety before it spreads). There is no other treatment. There has never been any other treatment. Chemotherapy and radiation are alien concepts, unless you are rich enough to fly elsewhere to get it. In Burundi, 100% of those who get unresectable cancer die – usually a horrible, protracted, painful death.

Yesterday I was at Kibuye Hope Hospital. They are the first to introduce chemotherapy in Burundi. It’s historic, it’s beautiful!

We saw the first batch of recipients, four precious little children with retinoblastoma. Tragically, many of them are still likely to die even with the chemo, barring a miracle. Because what would be detected and dealt with promptly in the West remains unaddressed here until it is too late. When parents eventually bring their child in, the cancer has spread too far. 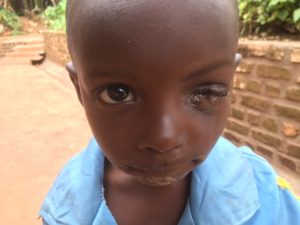 Gorgeous 4-year-old Thierry, also suffering from malnutrition, has had his right eye removed, along with the tumour. But the cancer has spread. He will die.

It seems so totally grim, and yet he will die with dignity. The horrific growth that disfigured his face and would have only gotten worse has been removed. The same will happen with Ernest, whose face people currently shy away from because of the hideous growth on his eye. 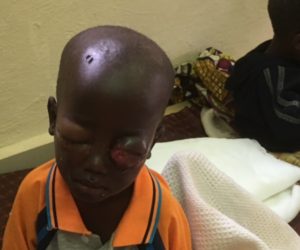 My eye-surgeon friend John said that he’d had about 150 such cases in the last couple of years that were hopeless. That can now be reversed. Parents can be made aware that there is hope, there is a potential cure.

The end of a death sentence.

It was an intense day. We were making a film to raise funds for a new paediatric ward. There is a malaria epidemic at the moment, so people were crowded into each ward, three to a bed. The hospital’s reputation means people travel from across the country to get the best care.

It reeked of stale sweat. People cramped together means more disease spreading in a place where people should be getting healed. In one horrific incident due to overcrowding, two mothers with their babies were sharing a bed, and during the night one rolled over and unwittingly disconnected the oxygen supply to the other mother’s baby. It was only in the morning they discovered what had happened – a needless loss of life… 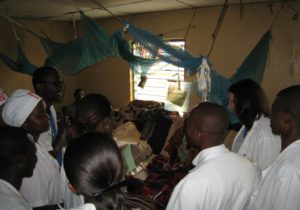 Beauty and tragedy side by side. Hope and despair jockeying for supremacy.

The (mostly) US Serge team – see www.mccropders.com for more info – are doing a stunning job there, in partnership with a lot of very committed Burundians. It is so encouraging to see the progress being made to transform what was a very run-down barely-functioning hospital a few years ago into the nation’s premier training hospital. God bless their efforts!

So here’s to many children (and adults) being healed of cancer in the years to come, at Kibuye Hope Hospital and hopefully elsewhere in Burundi. Here’s to that new paediatric ward being built as soon as possible. And next time you’re tempted to moan about the quality of healthcare you’re getting where you are, maybe try to remind yourself how much better it is than for many people around the world without the access you have.