Procaire’s story is a stunning one, which I trust encourages you. David writes:

“Procaire Bucumi lives in Kayanza Province of Burundi in the agricultural village of Musave. She was married to a witch doctor, and legally, she still is, although they are now separated. Procaire came to Christ a little over a year ago through a woman of God who continues to disciple her. I spent time with her today to listen to her story.

Procaire’s husband was not pleased with her new life in Christ, and especially when she told him that God does not want him to make his living practicing witchcraft. He argued that if he stopped his profession, they would all starve for lack of an income. She countered that if he repented, God would bless them and take care of their needs somehow. He ultimately accused her of driving his customers away, and he angrily drove her and their six children, ages 1 to 14, out of their home, taunting her by saying, “Let’s see if your God will take care of you now!” He has since provided her and their children with no support and has a woman living with him. He still practices witchcraft.

A neighbor, a single mother with three children, was the only one who would open her home to shelter Procaire and her children. But there were two problems. That neighbor’s house consists of only two small rooms, so it is a tight fit for two adults and nine children. Moreover, the woman who opened up her home makes her living as a prostitute, which often reduces the living quarters to just one room for ten people. Worse, Procaire has found herself being accosted by drunken men who frequent the house. The woman with whom she lives has tried to pressure her to earn some much-needed money by also selling her body. Procaire, however, is a new creation in Christ. 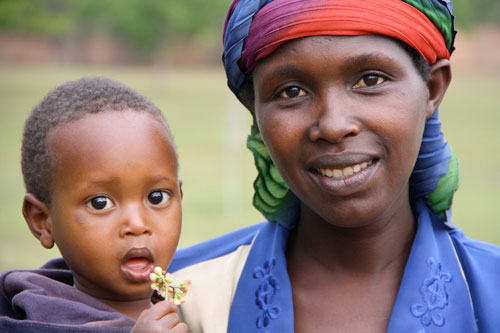 Procaire is also a disciple of Jesus (as are all true believers). In the last year, she has led six others to Christ, and together, they are going door-to-door spreading the gospel in their village of 3,000 people. Each of Procaire’s disciples have led three to five others to the Lord, and they all regularly meet to pray, admonish and encourage one another.

Procaire told me that one reason that people have rejected her and her message is because they think she is a prostitute, as she lives in a prostitute’s house. She also told me that her three oldest children, all of school age, have had to drop out of school for lack of school fees. And they simply don’t have enough food to eat.

I had the feeling that Procaire was one of the reasons I’m here in Burundi, and since her husband taunted her by saying, “Let’s see if your God will take care of you now!” I thought we ought to help him see what Procaire’s God would do. So I gave her some HF funds to meet her immediate food needs and get her three children back in school. I also decided that I would yield to the long-standing request of the director of Heaven’s Family’s Widows Fund (my wife, Becky), and change the name of that fund to the Widows and Abandoned Mothers Fund. With that, I was able to promise Procaire $400 so she can pay six month’s rent on a house of her own and purchase some domestic necessities. On top of that, through our just-established Burundi Widows Micro-Bank, I was also able to offer her a $400 loan to start a small shop in order to support herself and her children.

Procaire told me that she knows that as she seeks first God’s kingdom, He will supply all that she needs. Amen.”

‘The Lord protects the strangers; He supports the fatherless and the widow; but He thwarts the way of the wicked.’ (Psa. 146:9)