We had an early start, 530am, to get to the ferry which is part of the ACA Southern Tier Route. It had been lashing down with rain throughout the night, and so we had our first grim drizzly cycling session, but only for 8miles until we came to the ferry terminal. As it was raining, we sheltered underneath a house on stilts. A woman called Janet was doing likewise, so we got talking, and she ended up crying with me over her wayward son. We prayed together, I gave her a hug, she said she’d get on our website and make a donation, and off we went again on our way. Just before getting on the ferry, I gave another man a card, and he said he would too.

And then another man, who was the shuttle driver (more on him later). As with several more encounters throughout today (and many other days), it just strikes me how Americans (and particularly in the South) are so much more open, friendly and less cynical than British folk (speaking as one myself). It’s actually normal here to have a really positive interaction with random strangers whereas back in the UK if someone is too friendly most people are so wary that they keep their eyes down and get past them as soon as possible. 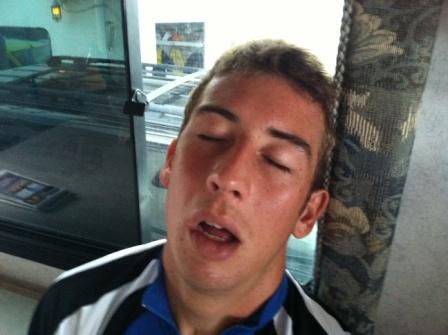 I’ve got a hilarious picture of Hadrian fast asleep on the ferry. We’d only done 8miles so far, so if he was that tired that soon, he was going to be in trouble. The ride across the bay was just 5miles, but it knocked many more off the journey, and meant we had a lovely coastal cycle ride for most of the rest of the day. John finally got rid of the louche slug on his top lip and he shaved it off into the sea. We are now a squeaky clean fully-shaven crew.

On we cycled, when we reached terra firma at the far end. Having new blood on the ride in the form of Ron and Hadrian is great. They have more energy with their fresh legs, and provide different things to talk about. I love Ron to bits. He’s a recovering alcoholic (been dry fifteen years, I think) and a successful man, but what I love about people who have been through AA is that they are so real. They’ve learnt that they can’t survive if they fake it. So, as always with Ron, it was straight into meaty chats with lashings of good humour thrown in as well. And what with him being new, he was super-enthusiastic about accosting passers-by with our cards, which led to a ‘widow’s-mite’ contribution of $5 from a poor fellow, a funny interchange at an intersection with a biker in the other lane as we delayed the traffic fumbling to get a card to him with the light now green, and more.

I get sent news on Burundi every day by Google Alerts, and today something positive came through. It wasn’t the usual massacre, disease, refugee, AIDS, famine, corruption stuff, it was altogether more encouraging, albeit slightly random (but we’ll take anything positive we can get from Burundi!) I quote:

“A long-fingered frog last seen in 1949 and feared extinct has come out of hiding in the forests of Burundi, a small country in eastern Africa, scientists reported this week. Called the Bururi long-fingered frog (Cardioglossa cyaneospila), the amphibian is about 1.5 inches (3.8 centimeters) long, with a black and bluish-gray coloration. 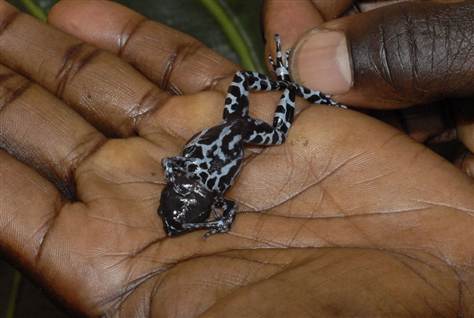 They knew the individual discovered was a male, because only the males of this species sport a ‘ring finger’, one extra-long digit on each foot with spines running along it; scientists aren’t sure what this lengthy digit is used for.”

Back on the road, a spunky brown-and-white Jack Russell chased us for 500yards at incredible speed, barking himself hoarse. Bearing in mind each of his four legs must have been about 8 inches long, that would be the equivalent of several miles for us. He just wouldn’t give up! He reminded me of old our dog, Benson (both he and Harley have died in the last few months after 16 years as the Guillebaud family dogs), likewise spunky, brown-and-white, and a Jack Russell. We used to take Harley and Benson into Burnham Beeches for long walks, and another regularly walker was a lady with five huge Alsatian bitches. Benson, all of twelve inches tall, would see those bitches from half a mile away and wham, he was off! He charged into battle, totally confident that he could tear them all apart, the other woman screaming a warning that he would get munched in one mouthful. It took him years to learn, often the hard way with blood drawn, that he wasn’t quite as big as he thought he was… but I loved his heart! O for more of us to enter life’s fray with such fearlessness! So, Harley and Benson, RIP! (Actually one of our two dogs in Burundi has also died – we called them Stark and Naked – so only Naked’s left now!) 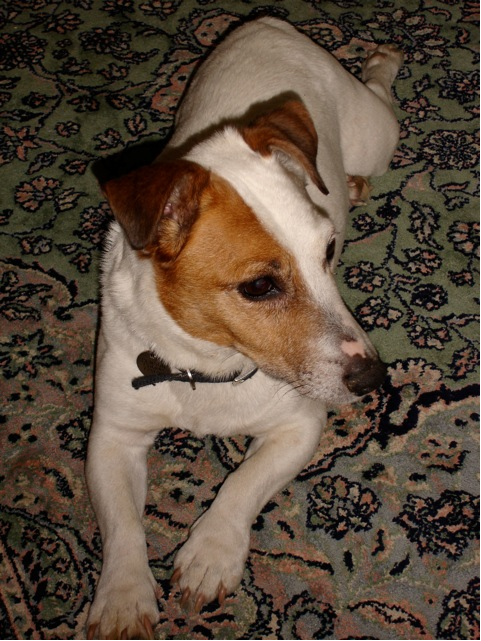 Our short sojourn in Alabama came abruptly to an end like so many of my summer teenage romantic escapades, lasting less than twenty fours hours after one blundering lunch too many! Every single Alabamic human encounter was a positive one, but as with those halcyon days of youth, there are plenty more fish in the sea (so to speak), or states in the union, so our fickle fealty flipped and flopped to Florida, our eighth state.

The roads were a lot busier than what we’ve largely been used to because the coastal area is more populated. It was dazzling in its beautiful, so Craig’s double-puncture wasn’t as dull an experience as it might have been as we had the mesmerizing view across Pensacola Bay for consolation. We finished our 110miles in good time, the new boys seemingly handling it fine, and headed back into Pensacola for an unexpected treat. David and Rebekah Bearden, our last weekend’s hosts, had paid for us to have two King-sized bedrooms at the Hampton Inn for two nights. Wow, we love you, D and R! 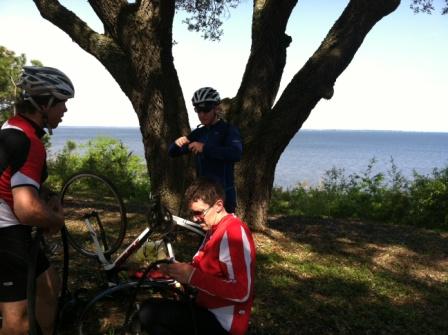 So we grabbed a quick shower and headed out for a Mexican meal, and then back to bed, extre-e-e-emely grateful for a day off tomorrow to rest our weary limbs. For some reason, Craig doesn’t want to share the massive double mattress with me tonight, but has made up the sofa bed to sleep there – his loss! I checked my email before switching off the light, and got this message:

“Simon, My name is Terry Etherton, and I am the shuttle bus driver on Dauphin Island. I tracked you down on Facebook. Hope you guys had a safe trip today. Just wanted to let you know that Sherry was at the Ferry landing this afternoon. As we were talking I showed her the card you gave me and she was telling about your accident. I told her that you had uploaded it to your site. She was going to check it out. Be safe and glad we met.”

Sherry, do get in touch, and watch the YouTube clip, it’s superb!!!