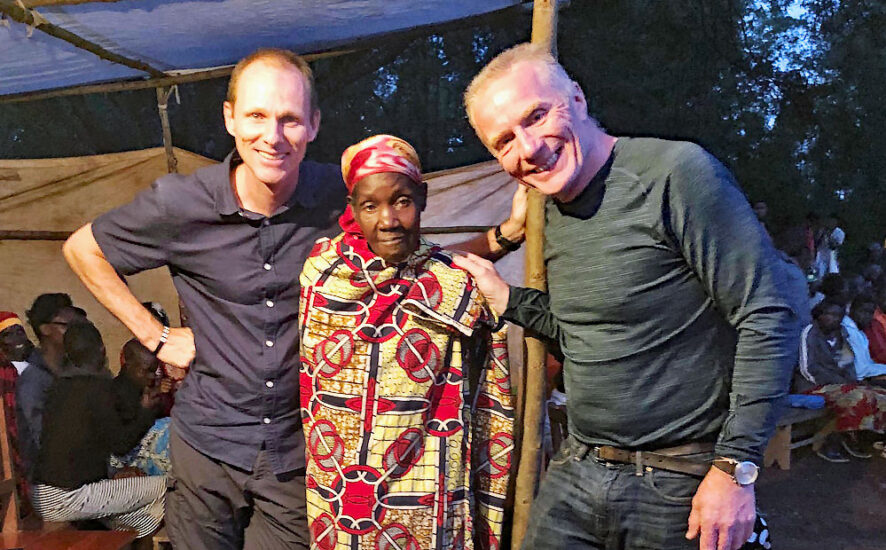 Yesterday we joined GLO’s newest partner UCE for an outreach event in the bush at a place called Bugendana. It was wild!

These guys have been running for a decade on a shoestring budget without any external support, relying on their own sacrificial contributions. Recently we committed to backing them, as their track record was so impressive. On this visit, I really wanted to see them in action, and I wasn’t disappointed. I’m out with a friend Jon, and he was likewise beautifully blown away. Not least because this lady came up to us after the main meeting, having testified on the stage with her husband in front of the big crowd, and said the following:

“I had a dream three nights ago of two white men coming to see me (there are no white men in this area far from the nearest city). It was lashing with rain and the mud walls of my house caved in on me, partially trapping my leg. I could see the sky above, and it was exactly like it is now. Then you arrived this afternoon, and when I saw you, I recognised you from my dream. I know God is speaking to me, and I’ve now decided to give up witchcraft and drink, which have been ruining my life. I’m surrendering my life to God, and with His help, I will manage it!”

I shared with the crowd, and a few dozen came forward for a first-time response. Then the sick were called forward to be prayed for, and all sorts of healings took place. Each in turn came to the microphone with stories of what had just happened. “I’ve been on crutches but now I don’t need them.” “I’ve had stomach issues for three years and they are now gone.” One lady was whooping with delight as she jumped up and down and declared herself fully healed from crippling back pain. A young man had been brought to the meeting straight from school by friends on a bicycle because he couldn’t walk on his own, and his face was radiant as he spoke of his complete healing.

As Jon said: “A cynic would say that they have been prepared in advance and lined up to give false testimony, but no way, those were genuine stories. Wow, I’ve never seen anything like it!”

Time ran out so we couldn’t hear all those who wanted to share, and then the dancing started, and it was beautiful unrestrained joy. Here’s a sample!